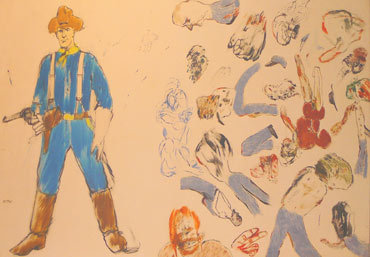 Now in its 240th year, the Royal Academy’s Summer Exhibition 2008 continues the tradition of displaying a wide range of recent work by both established and emerging artists in all media including painting, printmaking, photography, sculpture and architecture. This year’s coordinators, Royal Academicians Gordon Benson, Tony Cragg and Humphrey Ocean, have selected works for the exhibition around the theme of ‘Man Made’. Since the foundation of the Royal Academy of Arts in 1768, the annual Summer Exhibition has become the world’s largest open-submission contemporary art exhibition.

The Summer Exhibition attracts a high volume of entrants each year with around 10,000 works submitted this year. The majority of selected works are on sale, offering visitors an unrivalled opportunity to purchase original artwork by high profile and up-and-coming artists.

Highlights of this year’s exhibition include a gallery curated by Royal Academician Tracey Emin who has invited a selection of artists including Mat Collishaw, Louise Bourgeois, Gary Hume, Michael Fullerton, Juergen Teller, Damien Hirst, Rebecca Warren and Rachel Kneebone. Please note that this gallery contains some material of a strong nature.

A memorial gallery is dedicated to the extraordinary artistic achievements of the late RB Kitaj. Curated by Marco Livingstone, the room includes several key paintings and works on paper representing his work from the last fifty years, including several recent smaller paintings which are available for sale. Works include The Bells of Hell (1960), Catalan Christ (Pretending to be Dead) (1976), Sacha and Gabriel (1981), Bad Hearing (1996), and a group of works from 2005-6.

As seen on BBC TWO:
Sponsored by
Following on from last year’s successful BBC Series on the Summer Exhibition, the Royal Academy of Arts is delighted to be working with BBC TWO on an hour long Culture Show special to be screened in June.

MEMORIAL ARTIST
RB Kitaj RA (1932 – 2007)
Born in Cleveland, Ohio in 1932, RB Kitaj studied at the Academy of Fine Art, Vienna, the Ruskin School of Drawing, Oxford and the Royal College of Art, London. Retrospectives of his work were held at the Hirshhorn Museum and Sculpture Garden, Smithsonian Institution, Washington DC in 1981 and at the Tate Gallery, London in 1994.
Kitaj was elected to the American Academy of Arts and Letters in 1982. He also received Honorary Doctorates from the University of London, the Royal College of Art and Durham University. He received the Golden Lion for Painting at the Venice Biennale in 1995 and in 1997 won the Wollaston Award for the most distinguished work in the Royal Academy’s Summer Exhibition. In 1996 he was nominated Chevalier des Arts and des Lettres by the French Government. Kitaj was elected Royal Academician in 1991 (ARA in 1984). From 1997 RB Kitai lived and worked in Los Angeles.

ANNENBERG COURTYARD
A sculpture by Sir Anthony Caro RA has been installed in the RA’s Annenberg Courtyard. Consisting of five free-standing painted steel structures, Promenade, 1996, was originally created for the Tuileries Gardens in Paris. Taking its name from the idea of strolling in a public place, the sculpture evokes the rhythm and movements of walking.
Sir Anthony Caro’s Promenade is the latest installation in the RA’s programme of Sculpture in the Courtyard and follows on from the Chapman’s The Meek Shall Inherit the Earth, but not the Mineral Rights, Anselm Kiefer’s Jericho, Rodin's Gates of Hell and Damien Hirst's Virgin Mother.

EVENTS PROGRAMME
Alongside the Summer Exhibition 2008, the Royal Academy of Arts will be running a diverse programme of special events, evening lectures and gallery talks. Dedicated events for families will include gallery talks and workshops. For children aged between 8 and 13 there will be a free printed guide sheet to the exhibition. Activity trays, including art materials, are available for younger visitors to create their own works of art.