Composed for the gallery's two exhibition spaces, "Hunter House and Bear Suit Number Two" presents an installation of paintings and drawings. The artist has decidedly focused on returning to the basics; the end results are works that can be seen as both abstract and figurative, real and surreal. 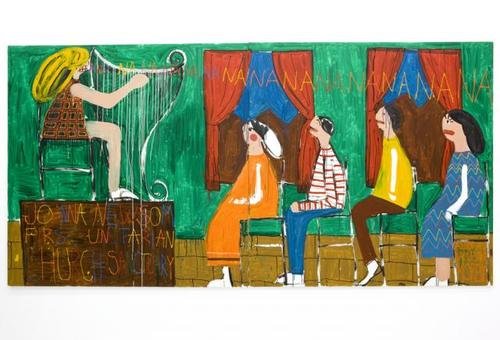 Javier Peres is pleased to present the first solo exhibition in the United States of the Spanish artist Antonio Ballester Moreno. Born in Madrid in 1977, the artist studied at the Universität der Künste in Berlin and graduated from the Universidad Complutense de Madrid, where he studied both painting and more contemporary forms of art practice. Upcoming exhibitions include a solo show at the Museo de Arte Contemporaneo de Castilla y Leon, Leon, Spain (MUSAC) in September. The artist will be present for the opening.

Over the last few years, Antonio Ballester Moreno has decidedly focused on returning to the basics, often painting as a child, and even going as far as dedicating an entire week to only generating one type of image - for example scribbling triangles on his canvases for weeks, then dedicating another week to spreading dots over the works...the end results are works that can be seen as both abstract and figurative, real and surreal. Yet their bright colors and silly playfulness belie a darker side.

Composed for the gallery’s two exhibition spaces, “Hunter House” will present an installation of large-scale paintings and drawings, while “Bear Suit Number Two” is a continuation of “Barkostum” (or “Bear Suit”), the artist’s 2008 exhibition at Peres Projects Berlin. The latter draws its title from the figure of Timothy Treadwell, the eco-warrior, who spent thirteen summers living in dangerous proximity to grizzly bears in Alaska’s Katmai National Park. More at home among the simple laws of nature, Treadwell reflects a certain current in distrust of the industrial-technological system. Like Ted Kaczinski (the unabomber), who also makes an appearance in Antonio Ballester Moreno’s works, his madness is indeed anti-social and manic; it is both chilling and brilliant.

Delving into the fascinating and unsettling waters between madness and society, the artist creates works that teeter on the crux between man and nature, between technology and Walden-like hermeticism. These works approach true madness unromanticized – banal and inescapable, all the while with a low-fi approach that is comic, darkly comic. With broad, heavily layered brushstrokes and occasional thick drips depicting everything from lions and pixelated flowers to castles and ghosts, he underlies his subjects with repeating patters (checkerboards, floral patterns, skulls) often executed in ink.

Antonio’s figures are romantic and nostalgic, churning up the forgotten, sublimated props of childhood, which, in their consciously rough execution, reveal the careful hand of someone who cares deeply about his subject. Indeed what the works of Antonio Ballester Moreno reveal is an absolutely authentic aesthetic in the face of their own disturbed context.