...For resistance. Under that title we group artistic approaches that are in our view particularly important today, for more than one reason. This exhibition brings together artists who adopt an attitude that is clear-cut, yet non-sectarian, radical, yet not extremist, difficult yet not impossible for the art market, and who often take sides in social or political matters. 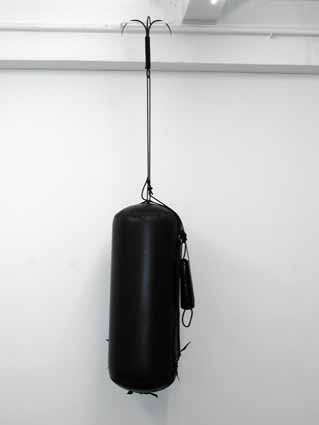 Energies for resistance : under that title we group artistic approaches that are in our view particularly important today, for more than one reason. At a time of multiple uncertainties, when the Swiss identity is being questioned, as well as the meaning of a Swiss Exhibition which has prompted a number of artistic projects, only to abandon them or adapt them to its own image, we think it is necessary to give the floor to Swiss artists whose activity bears the mark of its own strength, its own strictness, an energy to resist fashions too easy and compromises too lax. This exhibition brings together artists who adopt an attitude that is clear-cut, yet non-sectarian, radical, yet not extremist, difficult yet not impossible for the art market, and who often take sides in social or political matters. The project was born out of an exchange of views with the Basel artists Claudia and Julia MÃ¼ller, and other interviews on the subject of art and resistance.

Ian AnÃ¼ll fits perfectly in such an exhibition. Having been active for years on the artistic scene, his path is always to the point, though little present in the media. The works chosen question us on our relationship to trade marks, whether for a commercial product or a work of art, an object saved from the trashbin or precious metal like gold.

Christoph BÃ¼chel starts from a speech delivered on January 1st, 2000 by Adolf Ogi, then President of the Swiss Confederation. With a light touch, but placing that speech in the context of art, he gives us a free hand to judge the meaning of that clumsy piece of anthology.

Silvia Buonvicini, mainly known as a member of the Knut and Silvy musical team, invites us in her strange and fascinating universe of Brenda Bolasz, a fiction she has been nurturing for five years.

Valentin Carron offers each visitor the possibility of roaming around the exhibition on his very special tricycle, while leaving everyone responsible for dealing with the potential danger such an exercise implies towards other people.

In a recent film, Mourad CheraÃ¯t directs himself on the background of an identity quest, dealing in a direct and simple manner with questions of personal, artistic and cultural communication.

G3, a group of three engaged in various artistic and militant fields, introduce in the city a mechanism that involves the passer-by in a game of identification with a prominent figure in power. Also shown in the exhibition is a retrospective choice of their performance and action projects (whether actually performed or not).

In the ChildrenÂ¹s song corpus of 80 patchworks of partly cut press photographs, NicolÃ¡s FernÃ¡ndez brings about a sensitive vision of a disenchanted world where only children appear to survive among the ruins.

Fabrice Gygi imagines a contraption designed for a person faced with danger and compelled to run away. His suspended sculpture, The Buoy, allows one to escape and survive in various types of potentially hostile environments.

With his clothes turned inside out and directly hanged on the wall, Eric Hattan offers one of his numerous ways of observing things upside down. With his video Be my guest, he invites us furtively to visit an empty building without passing through the doors. Moreover, he has created a new set of furniture for attitudes welcoming space.

Myk Henry will present his Difficult Times performance during which he puts himself in harm's way and takes a stand with regard to recent dramatic events and more generally to the menace of war which threatens man's passing on Earth.

Steeve Iunker presents a funny and cruel aspect of his coverage of the Cannes Festival, a photographic meandering among a ridiculous, although quite real, human comedy.

Gerda Steiner presents her first mural painting representing a landscape. She confronts us with a harsh and silent nature, which however seems to contain a tremendous force. Her vision of nature asserts itself as a psychological field open to multiple interpretations.

Energies for resistance presents itself as a tentacular exhibition, evolving in every nook and cranny of attitudes, in the city, in the daily press, in this periodical, or via the Web's meanders, subtly to permeate the visitor's mind.
Jean-Paul Felley & Olivier Kaeser