In the exhibition, 12 artists show diverse aspects of their concern in painting, sculpture, photography, installation and video. They may focus on a rare species in danger of extinction, such as the eagle in Osmo Rauhala's captivating video images, or the preservation of trees threatened by decease, as in Joan Backes's paintings of tree bark, which could, in the future, become a points of reference to a species no longer in existence. 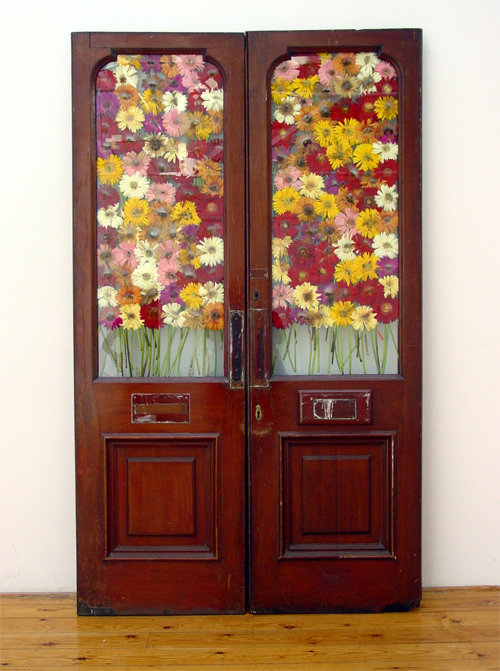 The urgent and imperative message to restore health to the environment must be conveyed in every possible form of media and communication, and more so in art, for it is one of the most powerful languages humans have ever created. Even in prehistoric times, peoples sought to transform the environment, through their cave paintings, megaliths and stone circles--seeking ways to connect with the force of nature. From those early beginnings, artists have been profoundly influenced by the images, colors, patterns, structures and systems of nature around them. At various times of turbulent change in our history, such as in Hellenistic Greece, medieval Japan, and Europe at the time of the great political and industrial revolutions, new art forms have emerged in order to address the changing relationship between nature and society.


From the turn of the new millennium, world concern over environmental issues such as pollution and global warming, species depletion, new genetic technologies and sustainability has increased. Artists, in turn, are responding by answering collective cultural needs and developing active and practical roles in environmental and social issues. In this exhibition,” Nature Interrupted,” twelve artists show very diverse aspects of their concern in painting, sculpture, photography, installation and video. They may focus on a rare species in danger of extinction, such as the eagle or a flock of migrating birds in Osmo Rauhala’s captivating video images, or the preservation of trees threatened by decease, as in Joan Backes’s paintings of tree bark, which could, in the future, become a points of reference to a species no longer in existence. Another metaphor is Katie Holten’s artificial tree made of refuse such as recycled cardboard, wire, newspaper, and black tape. The emblem of a tree in distress is a perfect symbol for the environmental crisis we are experiencing.

Anya Gallaccio’s installation “like we've never met” includes a series of doors with flowers pressed behind glass. Over the course of the exhibition, the flowers blacken and decay, highlighting the opposition between the instability of the natural materials and the permanence of the cast objects.

Dannielle Tegeder’s drawings depict a certain geometric growth as in the constructions of ants’ colonies or mole hills – it is up to the viewer’s imagination to decide whether Tegeder’s “city” is above or under the ground.

Soazic Guezennec’s installation shows a tent, an umbrella and a mosquito net painted with Africa’s tropical flora and fauna, yet covered with holes and rips and no longer useful and protective. These objects are a metaphor for environmental problems such as dirty water, acid rains and pollution that destroy Africa’s natural environment.

Alexis Rockman in his series of paintings “American Icons” shows an apocalyptic vision of American national monuments such as the U.S. Capitol and Mount Rushmore. Even such bastions of frivolity and greed as Hollywood suffer the same leveling fate when it comes to the status-blind and whimsical response of our planet. Equally the drawings in Helen Brough’s series “Cataclysmic Hypotheses” generate imaginary visions of iconic contemporary architecture that will eventually become ruins. These drawings serve as a translation of vague unconscious dreams of catastrophes mixed with the haunting recollections of disasters seen in film, television, newspapers or on the web.

The installation by Jade Townsend prompts us to reconsider our current vision of an “ideal” and “successful” life - in the wake of increasingly common violent natural disasters that can instantly obliterate all we have striven to achieve in a lifetime.

Jon Brumit focuses on corn as an evolving instrument for litigation and intellectual property issues. By way of critique of the current corporate influence over food production, his sound installation using recycled plastic bags and counterfeit corn resembles sonic architecture and violent instruments more than anything remotely edible.

Chus Garcia-Fraile in her photographs and videos inserts escalators and other examples of modern technology into pristine jungles and landscapes – a vision that is disturbing and enchanting at the same time. Is that the future of nature – will it be saved or destroyed by modern technology?

The same question is asked by Jon Elliott, whose paintings depict piles of computers and televisions, mixed with the occasional oil/waste drum, populating various waterways. Radiant, though somewhat toxic skies drip, and cast their neon color schemes over these dark and sublime waterscapes, while mysterious undulating patterns appear like life-like forms born of chemical and digital run-off.

Art is a potent tool for arousing environmental consciousness and we need a lot more of it. Here we have a basis for a true and much needed vivid dialogue. It sets a critical attitude into motion that intervenes and infiltrates, re-interprets and decodes humans' relation to non-human life, as well as to each other. I feel it is a silent but determined revolution.
Elga Wimmer, Curator