Graffiti solo show. Since 2001 artist has taken a radical departure away from the uniform structure of traditional graffiti letters and technique. In his current work he has pushed into the realms of abstract expressionism and stripped the artform of all of it's traditional trappings of color, medium, and process. 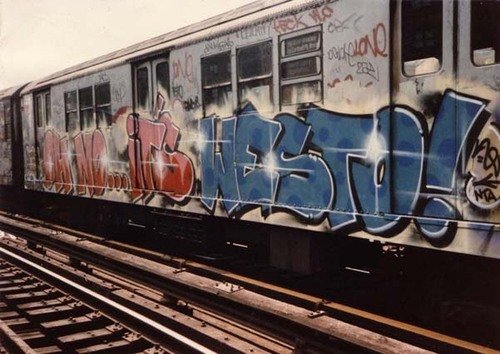 Recognized as one of the most prolific artists in the New York Graffiti scene throughout the 1980's and 90's, West has been painting publicly for the past 24 years. Born and raised in New York City, the grandson of Russian-Jewish immigrants, West began painting on the number 1 Broadway local subway line in 1984 - it was there that he delved fully into the lettering arts, and where he began to recognize graffiti's social relevance as the crossroads of art, culture, and personal identity.

Throughout the mid to late 80's West became known for his clean 'simple style' letters, and as one of the last of a handful of artists who was actively painting just before the demise of subway graffiti in New York. Throughout the 1990's, West, along with his 'Fame City' crew
has been recognized as a major influence in the NYC graffiti movement by spearheading concept-driven, thematic productions which are now the norm in large scale graffiti mural painting.

Since 2001 West has taken a radical departure away from the uniform structure of traditional graffiti letters and technique. In his current work he has pushed into the realms of abstract expressionism and stripped the artform of all of it's traditional trappings of color, medium, and process.
As a result a new unique language has emerged.

West first exhibited in 1985 with Librizzi Gallery's 'Graffiti & East Village Artists' show, and has since exhibited in numerous solo and group shows shows in New York, and internationally. Currently West is working on a collection of large scale Black & White paintings in his Anti Graff series.

Artist stament
"In the year 2001, after 17 years of 'writing', something fundamentally shifted in the way I saw Graffiti art in general, and my work in specific. I began to feel constricted by the rules and strict technical codes of Graffiti lettering styles. The process for me became a form 'painting by numbers' where an outline was created, colors were chosen, and the rest was a set formula with little room for improvisation. Simultaneously, I began to study the work of the Abstract Expressionists particularly Franz Kline, Jackson Pollock, Robert Motherwell, and Clifford Still, and in their work saw an opening, a freedom, that was missing from the Mannerism of traditional Graffiti.

I decided to abandon the technique that I was so comfortable with. I began to approach my paintings differently. I took away the traditional tools of medium and color. I de-emphasized the skills of precision that I had honed over the years. I stopped doing sketches or outlines before my paintings, and I allowed myself to be free. I started to break down the walls of the letters themselves. First I started to make the letters transparent, and pile them on top of one another, then I took them out of their traditional linear format. In this process I began to see shapes emerging that in themselves were powerful. I started to focus on those shapes and through them attempted to re-construct a letterform in my mind. As this process continued the work became more and more abstract, and I stopped treating the subjects of my paintings as objects, but began to see them as ideas. The movement and form became more important to me than seeing an actual object in the painting.

Just as the muscular memory of thousands of "West" pieces inform the linework and gestures of my current paintings, so too do the underlying motivations of why I started painted trains 24 years ago - To be free."
West One, 2008