Massive centrale. For his exhibit, Duprat created original experimental sculptures using minerals (pyrite, calcite, magnetite...), modeling paste and even egg white... These works may be puzzling not only because of the odd nature of the materials used by the artist, but also because we are never able to understand them from a single angle visually or conceptually. 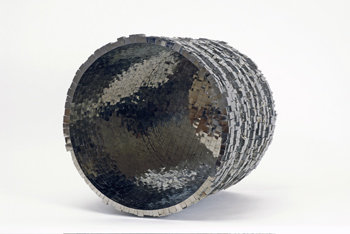 Pursuing the development of a research on environmental issues that is ongoing since its creation, the Vassivière Art Center welcomes from July 6th to October 25th 2008 the exhibition massive centrale by
Hubert Duprat. Although this artist has preferred over the last few years to show his production rarely, he nevertheless continues to be seen as one of the major figures of his generation, with work that is largely represented in public collections in France. His work was shown at the Cartier Foundation in Paris in 1998, at the PS1 in New York in 1998, and at the Mamco in Geneva in 1999.

By inviting Hubert Duprat, the Centre international d’art et du paysage at Vassivière Island - under the curatorship of its director Chiara Parisi - proposes an exhibition completely comprised of new productions for the singular spaces of Aldo Rossi's building. The exhibit massive central is a testimony of the co-existence - so dear to Hubert Duprat - of nature and artifice, of compactness and transparence, in a close network of interdependent relations.

In the heart of Vassivière island massive centrale offers a set of wonders showing the evidence of a creative mind that never denied its own Utopias. For his exhibit at Vassivière, Hubert Duprat created original experimental sculptures using minerals (pyrite, calcite, magnetite…), modeling paste and even egg white …

These works may be puzzling not only because of the odd nature of the materials used by the artist, but also because we are never able to understand them from a single angle visually or conceptually. This way of working brings us to the furthest reaches of the knowable and admissible. This visionary relation is increased by the great technical and plastic quality of these productions and by Hubert Duprat's great detachment in regard of the production process itself that is handed over to others. His works acquire something prodigious and imperceptible that might evoke curio-filled cabinets if they were not so rooted in contemporary creative practices. This idea of modernity brings him close to the extremely rich fields of conceptual research and design (in the seriality, repetition and reconstitution of the forms).

The exhibit is a perfect example of the goals of the Centre international d’art et du paysage to work together with the artist community in order to become a production laboratory, a catalyst of their Utopias that will - at the same time - raise these experimentations and productions to a very high level of competence.

The nave of the Art Center houses six sculptures that originate in a stubborn quest for perfect execution but are also filled with utter uncertainty as to their outcome and understanding. They spring from the artist’s erudite knowledge of art history, archeology and the natural sciences. Indeed, Hubert Duprat’s practice embraces several areas and can be seen as the application of theoretical reflections on the elements belonging to the mineral world.

Here the nave becomes the theater of fundamental questionings of art history: perception, fabrication and prodigy, the demiurge artist and nature… Thus, the first histologic method described by Leonardo da Vinci for the study of the human eye can used as a key for understanding the nave's instalation. For a better understanding of how the human sight worked, Leonardo da Vinci had the idea of cutting an eyeball and fixing it in egg white, so as not to displace, deform or tear anything and not to lose the vitreous body but mainly to be able to observe the anatomy of the eye properly.

Visitors can observe small, perfectly smooth spheres whose surface is so perfect that it looks unreal, like an eye ball (which is in fact completely made of cooked egg white). These small, fragile and ephemeral structures contrast with the other pieces in the exhibit and require to be particularly attended to. The inner perfection of the egg yolk yellow sphere is revealed on the outside with the roundness of the egg white.

Yet another piece, faceted like a crystal, results from cutting the material into a large quantity of cones which are sectioned at random to create geometrically different figures (an ellipse, a triangle…) in which one can see the initial form that has caused them to be born: the cone. In the heart of the nave, then, we experience an enormous shapeless mass sliced into two blocks to show what they are made of respectively. This work is a testimony to the reflection made by Hubert Duprat on fragmentation and re-composition.

Further ahead, the artist has placed a cylindrical sculpture made of pyrite, a stone peculiar in having parallelepiped-shaped crystals. In this work, Hubert Duprat has performed a veritable feat of strength resulting from an important period spent in defining the contours of the project and observing the reactions of the material. In fact, pyrite, also called “fool’s gold”, is so complex a stone that its shape plays on one’s imagination. Its presence in coal mines has for a long time been the cause of accidents, for it provokes firedamp explosions. Today it is known as a dangerous agent in making concrete due to its capacity to produce sulfuric acid. Its agglomeration is not easy, so here the artist constrains the material to give it a new form whose interior is offered as a large, smooth surface, like a mirror inspired by the skies of the Incas when they polished large surfaces of pyrite.

Not far from here, the visitor discovers seven mastic-putty cylinders whose two extremities laid on the floor allow a glimpse of hematite. Optical calcite, also called “Iceland spath”, a very pure mineral, divides the light that shines through it in two beams, which makes us see double when we look through a calcite crystal. According to Descartes, one is "ordinary" and the other "extraordinary". By performing this “ice cube” trick, made entirely of bits of calcite placed in staggered rows, the artist creates an aerial and complex sculpture where the beams of light are diminished.

In the study room the visitor discovers an enigmatic heap of several tons of spindles of magnetite. Hubert Duprat chooses to place in the same room this multitude of naturally magnetized stones. The importance of light, the element that permeates all of the artist’s work, is so manifest in this simultaneously massive and sparkling sculpture. This amassing of polished magnetite appears like a block of light adding the power of simplicity and the shock of the unexpected.

In the little theater the artist elaborates a device that transfigures the space devised by architect Aldo Rossi by installing a new ceiling covered with black and red mica that explicitly recalls a vault in sheets of mirror built in the Stupinigi castle near Turin in Italy in the 18th century by the Italian architect and decorator Filippo Juvarra. The work presented here plays, as the artist is wont to do, with covering surfaces. Here – more than in any other work – the fabrication process is visible through the modeling paste that bears the marks of fingers in the joints between each stone. In addition, the assemblage of the mica and the modeling paste shows unpredictable correspondences, underscores balances and solidarities and engenders fresh possibilities of evolution between the two materials, these two opposing tensions.

Hubert Duprat reclaims this breathtaking place, the lighthouse at the Art Center, by conceiving for it a monumental installation.

Echoing the little theater, the installation sections the space and once again obliges the visitor to raise his eyes and discover a work that forms an immense plateau comprised of a multitude of PVC tubes of different random dimensions. This alveolate surface filtering the Zenithal clearing of the lighthouse thus becomes a paradoxical device, both heavy and aerial. The exponential development of the circular shape inscribed in a round space is prodigious both for its incongruity and its monumentality. Furthermore, the composition of this vault evades our sight according to the angle of vision, rendering it either utterly opaque or opal.

Isolated in his library that doubles as his studio, Hubert Duprat imagines his sculptures by letting the outside world enter his workspace. The studio-library becomes a collector's imaginary space, a place to keep, a caravansary of oddities, bought, resold, mixed up to result in an assemblage that encompasses the widest variety of things : from science books to insects' iconography related texts. It's in this space that was born the experimenting process that generates the artist's intuitions, themselves becoming sculptures through a dialogical communication system between him and his collaborators, assistants or any person involved in creating a work.

At the occasion of the exhibit massive centrale, a catalog will be published by Silvana Editoriale (Milan) under the artistic direction of Paola Manfrin.

Le Centre international d'art et du paysage is financed by the Ministry of Culture and Communications / Drac Limousin and the Regional Council of Limousin.

The exhibit massive centrale, organized thanks to the partnership of Naturalia, Pro Natura and the Syndicat mixte régional et interdépartemental of Vassivière in Limousin (SYMIVA), enjoys the support of the Frac Languedoc-Roussillon.