An exhibition of drawings by 17 artists who set up various processes of fragmentation and erosion of information. Close attention is given to execution, a concentration on the production process itself. Microwave identifies an international host of artists who commit to the obscene activity of paying attention. With intense focus, the artists on show document the relentless propagation of delicacy as a subversive attitude. 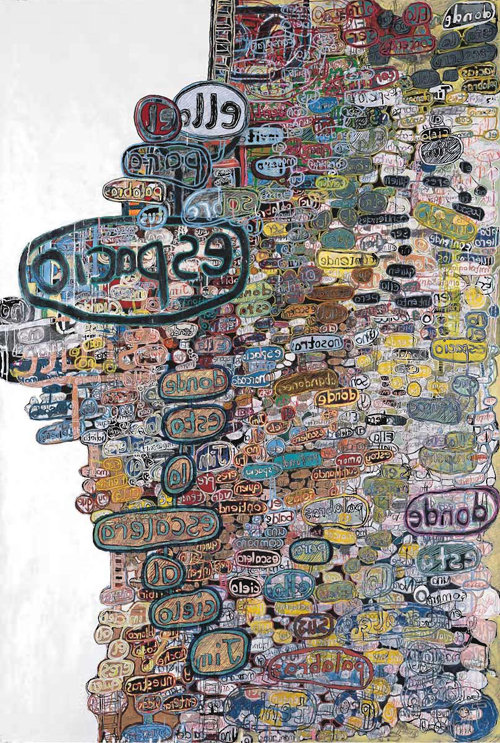 Josée Bienvenu gallery is pleased to present microwave, six, an exhibition of drawings by seventeen artists who set up various processes of fragmentation and erosion of information. Close attention is given to execution, a concentration on the production process itself. A microwave is useful everyday to cook fast, or once a year to look at slow drawings. Since 1999, the (almost) annual edition of microwave has been an opportunity to confirm the emergence of a new attitude. As an alternative to an inhospitable era, microwave identifies an international host of artists who commit to the obscene activity of paying attention. With intense focus, patience and precision, the artists in microwave document the relentless propagation of delicacy as a subversive attitude.

Ernesto Caivano, Dean Smith, Károly Keserü and Renato Orara bring drawing to an extreme, as a sort of “maximalism.” Through the endless weaving of minute components, they accumulate signals and vibrations impossible to detect without an extraordinary level of attention. Tones, hues, and shades combined with density, shapes, and intangible forms result in a grand yet subtle game, always remaining just a fragment of a whole. With obsessive attentiveness to detail, Jim Hodges, Stephen Eichhorn and Kamrooz Aram subvert the conventions of monumental practice, poetically linking evanescent moments in works of self-confident beauty.

The works in the exhibition touch upon the very fragile nature of communication and exchange. Allyson Strafella’s typewritten drawings on transfer paper, Alexandra Grant’s multilayered wordscapes or Rivane Neuenschwander’s Ze Carioca altered comic books, explore ways of recording, fragmenting and obliterating information to create new non-verbal narratives. Data manipulation is also at the core of Brian Lund’s graphic translations of film sequences and of Jesse Pasca’s charted drawings: Moore’s Law, My Heart as a Stock Market and How To Be Human, map the correlation between human activity and systems of scientific data.

Through minor operations on paper the artists in microwave disturb established systems of expectations. Jacob Dyrenforth’s pixilated pencil drawings of crowds at rock and roll concerts and Graham Dolphin’s scripted vinyl records disrupt and reprocess the clichéd aspirations of popular culture and the glamour industry. Growing up in Utah in the Mormon Church, Casey Jex Smith explores narratives in ancient scripture. Andrew Scott Ross’ Re-Collections inventory given museums. Randomly floating in space, artifacts are depicted in a constant curatorial drift, suspended from interpretation and hierarchy. Phoebe Washburn exposes generative systems based on absurd patterns of production. With their elaborate notations and coding, the un-monumental drawings are microcosms of her convoluted architectural environments.