In their respective practices, Matt Connors, Marc Hundley and Michael Stickrod share a common commitment to the importance of irrationality, desire and anecdotal personal experience in the making of art. On show the works of the 3 artists that focus on art as an arena of singular pursuits. 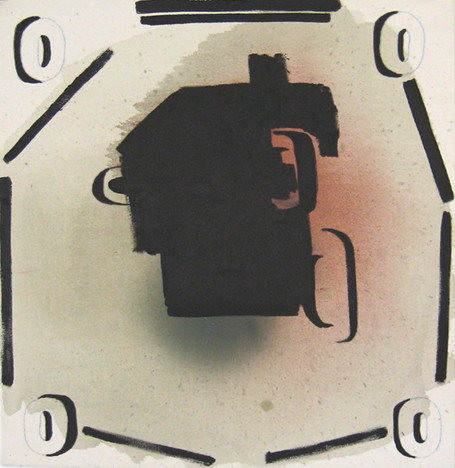 In their respective practices, Matt Connors, Marc Hundley and Michael Stickrod share a common commitment to the importance of irrationality, desire and anecdotal personal experience in the making of art. This exhibition brings the work of the three artists together in one place and focuses on art as an arena of singular pursuits.
Matt Connors makes abstract paintings at a time in which the undetermined and personal nature of abstraction is no longer a given, or as Hamza Walker asks, “once abstraction has acquired legibility is there such a thing as abstract painting?” Matt Connors’ pictures address the objectness of painting and the slippage between abstraction and representation while at the same time negotiating the idiosyncrasies of individual vision and creativity. His works have been seen in solo exhibitions at CANADA in New York, The Breeder in Athens and in the fall will be the subject of an upcoming solo exhibition at LutgenMiejar in Berlin.

Marc Hundley’s works combine found imagery and text with personal dates and locations from his own life. His paintings and drawings are D.I.Y. appeals to the bonds between individuals and the connections we have with literature and popular culture. For a friend’s birthday he might create a poster of Bob Dylan with the birth date and address of the friend as an advertisement for a seemingly private concert that never existed in fact, but could easily exist within the realm of dream and fantasy. Hundley’s practice has mostly manifested itself outside of the gallery system through happenstance distribution among strangers or through deliberate gifts to friends. A Canadian by birth, Hundley has lived and worked in New York for the past 15 years and was recently featured in exhibitions at Rivington Arms in New York. This is his West Coast debut.

Michael Stickrod’s videos are mesmerizing constructions of personal family documentations that range from reel-to-reel audio recordings of his mother’s memories, to scans of her paintings, to video that Stickrod shot observing his parents’ daily lives. The woven portraits of his father and mother become non-linear and abstract statements on life lived in the day-to-day. Jarrett Gregory of the New Museum writes, “The films capture a Depression-era sensibility and are reminiscent of works by American playwrights Eugene O’Neill and Arthur Miller, both of whom have investigated the struggle for autonomy within a family and the dissolution of the American Dream.” Michael Stickrod’s work is currently on view at the New Museum in New York for the 2008 Altoids Award exhibition. He received his MFA at Yale in 2005 and currently lives and works in New Haven, CT.