The Flight of the Dodo

An eclectic exhibition made up of various artworks and elements that celebrate adventure, delve into factual myths, plunging in and out of notions of the hybrid, evolution, imaginative escapism, the will to survive and ultimate extinction. The show includes artists who have an eye on the flipside of life, the next steps in evolution and an interest in the end game. Curated by Jonathan Carroll and Tessa Giblin. 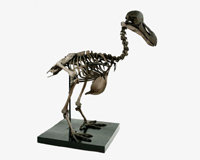 The Flight of the Dodo is an eclectic exhibition made up of various artworks and elements that celebrate adventure, delve into factual myths, plunging in and out of notions of the hybrid, evolution, imaginative escapism, the will to survive and ultimate extinction.

The exhibition includes artists who have an eye on the flipside of life, the next steps in evolution and an interest in the endgame. While we read endlessly of global warming and the future migration which will be necessary to survive, there is much debate and angst about the timeframe for this outcome. Some artists focus on the landscape after the fall while others envisage salvation through science and technology. Some artworks let you escape from rational understanding, while others ground you in disaster archaeology of the 20th Century.

In Sven Johne's infrared, wolf's-eye photographs and texts we read about places developed by man that have returned to nature - abandoned, overgrown, ghost-like relics of past activity. This transformation, both materially and functionally, is seen also in Douglas White's Crow's Stove, which is made from truck tyres found in Belize, Central America and other discarded manmade material. These tyres, found along a busy commercial highway, become the materials for White's expansive and majestic palm-like tree, which planted in the centre of the gallery, encourages the ground beneath you to take a different form.

Eoin McHugh is furthering his research and interest in Darwinism and evolutionary theory, and making new drawings for The flight of the Dodo. McHugh's paintings often evocate normality cast adrift into a sea of surrealism - he combines opposite forms or references in an innocuous manner, creating a 'second-take' effect in many of his previous works. Martino Gamper collects bits of broken and displaced seating stools and combines various parts together to form new stools. These completely unique pieces of furniture and hybrid functional objects are reclaimed as artworks and placed around the gallery. Placed around with Gamper's stools, are copies of Ryan Gander's 2004 story-book, The Boy Who Always Looked Up. The hardback book, with illustrations by Sara De Bondt, watches the relationship between a little boy and an architect grow. This story, with abstracted escapism at its base, champions the individual's possibility to overcome despair with the tools of belief and imagination.

Francis Upritchard's Sloth 2005 is an awkward, long-limbed, wobbly figure who rests on her back with limbs stretching into the air. She is not quite the ordinary sloth, with multiple nipples and strangely alienated mask for a face, her furry limbs are adorned with aged, white dress-gloves. Subtly emerging out of white walls is Irene Kopelman's Monster, a relief form which is based on the collected drawings and observations taken by adventurers and researchers after their encounters with very foreign and shocking cultures. Her two-headed and grotesquely formed Monster seeps out of the past and out of the walls.

Tim Braden's installation, I spend my evenings sitting by the fireside hunting tigers, 2008 is both adventurous and cautionary. The classroom setting recalls very physical explanations of physics, geography and history, and the installation includes a sail adhered to the desk, which when filled with wind from a fan on the ground, catches the breeze and provides a cunning tool with which to learn to sail. Episodes from CBS Radio Adventure Theatre are heard from inside the desks, which also hold paintings, books and other objects. Just outside the gallery, Braden's Planetarium, 2008, is also installed - a gangly model to assist with understanding orbits.

Notes about the artists

Ryan Gander (1976) Born in Chester, UK, Gander graduated from the Manchester Metropolitan University and later was resident at the Rijksakademie van Beeldende Kunsten, Amsterdam. Represented by Store Gallery, London, Annet Gelink Gallery, Amsterdam, and Tanya Bonakdar Gallery, NY, 2008 solo exhibitions include South London Gallery, Ikon, Birmingham, Kunstverein Bonn and Kunst Halle St Gallen, and he will curate an exhibition in August at Tate Britain. Gander's work constantly attempts to extend the location of art and the mediums considered the territory of art. He has a multi-faceted practise that includes installation, sculpture, performative lectures, writing and publishing. He manipulates recognisable everyday objects, such as a crossword or a children's storybook, to provide another way into forms we are blinded by with hyper familiarity.

Martino Gamper (1971) Born in Merano, Italy, Gamper undertook an apprenticeship in cabinet making, then studied sculpture and product-design at the University of Applied Art and the Academy of Fine Art in Vienna. In 1996 he moved to Milan working as a freelancer for international renowned design studios, then to the RCA in London which he graduated from in 2000. His work has been exhibited in various exhibitions from the V&A, Design Museum, Sotheby' s, Nilufar Gallery, Oxo Tower, Kulturhuset/Stockholm, MAK/Vienna, National Gallery /Oslo and various other Galleries. His 100 Chairs in 100 Days in 100 Ways project and publication, reworked furniture he found dumped on street corners or lying broken in friends' apartments. The titles of the new hybridized chairs tell the story of the encounter with the materials he finds on his travels through London where he is based.

Sven Johne (1976) Born on the German Island of Rügen and now based in Leipzig. After studying literature and journalism in Leipzig, Johne completed Photography and then Meisterschüler, Hochschule für Grafik und Buchkunst, Leipzig in 2004 and 2006. He has had recent solo exhibitions in Dortmunder Kunstverein and Nassauischer Kunstverein, Wiesbaden, and participated in group shows including Mercury in Retrograde, De Appel, Amsterdam, Don Quijote, Witte De With, Rotterdam (both 2006) and Don't Worry - Be Curious! 4th Ars Baltica Triennial of Photographic Art, Stadtgalerie Kiel, and Seestücke, Hamburger Kunsthalle, (both 2007). Johne creates photographs and films of various stories of places which people have passed or travelled through. For Johne a location never stands still it is always becoming or evolving from a past.

Irene Kopelman (1974) Born in Argentina, Kopelman moved to Amsterdam to become a resident at the Rijksakademie Van Beeldende Kunsten in 2002. She has participated in a number of exhibitions in Europe and Argentina, including Logicas Desviadas, at 713 Gallery , Buenos Aires, Levity at The Drawing Center, New York, and also organized with Mariana Castillo Deball (Uqbar Project) 'A for Alibi' at de Appel, Amsterdam in 2007. Uqbar is currently developing a project to be presented at Manifesta 7 in the venue of Rovereto. Her work often departs from scientific investigation. Fascinated by the findings made manifest by scientific apparatus, the works investigate the cultural implications of these findings. They question the nature of 'seeing', of empirical knowledge, and she shows a comfort with using the systems of scientific display in her own practice.

Eoin McHugh (1977) Born and working in Dublin, McHugh graduated from NCAD in 2005. Since then he has had solo exhibitions in Centre d'art Contemporain, Chateau des Adhemar, Montelimar, France, and at Studio 6 in Dublin. Selected group shows include Phoenix Park, Kerlin Gallery, Dublin 2008, Don't Box Me In, Galeria Leme, San Paolo 2007, Rendez Vous, Ecole Nationale Des Beaux Arts de Lyon. McHugh has developed a practice that begins with elaborate drawings of people and animals or a combination of the two in strange situations. He works in installation and sculpture where illustration of man's interaction with an anachronistic environment is surreally presented.

Francis Upritchard (1976) Born in New Zealand, Upritchard studied at the Canterbury School of Fine Art, before moving to London where she currently lives and works. Represented by Kate McGarry, London and Ivan Anthony Gallery, Auckland, Upritchard's 2005 solo exhibition at ARTSPACE Auckland won the artist the Walters Prize. Other group exhibitions include The Way We Work Now, Camden Arts Centre, London, 2004, The Secret History of Clay, Tate Liverpool, 2003, Becks Futures, ICA London. Francis Upritchard creates anthropomorphic sculptures, modelled by hand and re-working figures from the past including taxidermied animals and replicas. The barriers of artefact and bric-a-brac are blurred as the works often imitate objects to be discovered by a future archaeological dig. Upritchard will represent New Zealand at the Venice Biennale in 2009.

Douglas White (1977) Born in Guildford, UK, Douglas White graduated with an MA in sculpture from the RCA, London in 2005, after graduating in Fine Art from the Ruskin School of Drawing and Fine Art. His recent solo exhibitions include, Hartrot at Galerie Gabriel Rolt, Amsterdam, 2008 and Lillith at Paradise Row, London, 2007. Some recent group exhibitions include Welcome to Paradise, Nuke Gallery, Paris 2007, New Contemporaries, The Coach Shed, Liverpool 2006 and Young Gods, Clapham Art Gallery, London 2005. White is known for his use of found objects which he encounters on his journeys abroad and in the UK. These materials are reworked and formed often into the shape of natural objects. It is as if nature has reclaimed the detritus of man's exploitation of natural resources rather than waiting for a solution for recycling. White has been known to use objects such as lightning struck tree stumps, burnt basketballs, exploded tyres and old cabinets. White is represented by Paradise Row, London and Galerie Gabriel Rolt, Amsterdam.

The Dodo and the Dead Zoo
A discussion topic and lecture by Mr Nigel T. Monaghan, Keeper of the Natural History Museum of Ireland. Wednesday 30th July at 4 pm