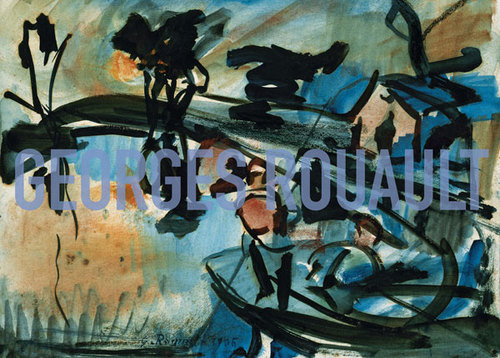 On the 50th anniversary of the death of Georges Rouault (1871-1958), the Musée national d'art moderne – the holder of the world's largest collection of the artist's work – pays tribute to this highly individual painter.

The Museum is to show some twenty of Rouault's paintings, hung at the beginning of the display of the modern collection as a pendant or counterpoint to those of the Fauves, the selection focusing on the early years of his career (1905–1914), when he made his first paintings of women in front of the mirror, of sad-faced clowns, of sparkling landscapes. The works come from the collections of the Musée national d'art moderne, the Musée d'art moderne de Lille Métropole, and the Fondation Rouault.

"The art that I seek would be the most profound, most complete and most moving expression of what one feels, faced with oneself and with ones fellow human beings."
Georges Rouault, 1905

In 1891 Georges Rouault became a student at the Ecole des Beaux-arts de Paris, where he studied under Gustave Moreau and where he met Henri Matisse and Albert Marquet. With the two last he organized the first Salon d'Automne in 1902, and it was in a studio in the Rue Rochechouart, which he shared with Marquet amongst others, that Rouault painted the first of his "Girls." Lacking money to pay for models, the painters invited the prostitutes on the street outside to come and warm up in the studio whenever they liked.

When Rouault describes the way in which he painted in blue the woman he saw before him to make her match the mood he was in, he goes straight to the heart of the Fauve aesthetic. Yet when one looks attentively at his paintings, one cannot but be struck by his profound singularity, characterised as they are by a fierce black line and sombre colours, sometimes lifted by bright red, a manner that often gives the impression of glowing stained glass. Here are no areas of pure colour or the accumulated patches of broken colour such as might be employed by Braque or Derain or Vlaminck to render the intense light of the South: Rouault's lyricism is darker, as art critic Louis Vauxcelles would remark. And indeed, at the Salon d'Automne of 1905, the five canvases that Rouault showed were not hung in the room the same writer would make famous as the "cage aux fauves" (the cage of wild beasts), but in a neighbouring section alongside other pupils of Gustave Moreau's.

It is the subjects that preoccupied Rouault at the time of the Salon and figured in those five paintings that are evoked by the present tribute: landscape, the world of the circus, the girls.

The Centre Pompidou is to stage the first ever large-scale exhibition devoted to the work of French architect Dominique Perrault. With this, having earlier paid tribute to Christian de Portzamparc (1996), Renzo Piano (2000), Jean Nouvel (2001), Thom Mayne (2006) and Richard Rogers (2007), the Centre continues in its commitment to promoting knowledge and understanding of contemporary architecture through organising exhibitions on the world"s great architects.

Dominique Perrault's name immediately calls to mind the Bibliothèque Nationale de France, an East Paris landmark which, conceived as a non-architecture, the simple delimitation of a volume around garden, is today recognised as having inaugurated a new logic of the architectural object and its environment.

The aim of this exhibition is to introduce the public, through a selection of some fifty projects, to a body of work that cannot be represented by a single building, however emblematic it might be, evidencing rather a continuous development, a perpetual search for groundbreaking forms of expression. Visitors will make their way among screens of the metal mesh that are crucial to Perrault's architecture, of which he says : "These aren't authoritative, impenetrable, separating walls. What they do is create permeability, interrelationship. So from the beginning there's an abolition of enclosure in favour of transition, motion."