"That Beautiful Pale Face Is My Fate" (For Lord Byron). The gallery presents an exhibition amongst the personal effects of Lord Byron in his splendidly atmospheric ancestral home. Works by: Ulla Von Brandenburg, Pablo Bronstein, Marcia Farquhar, Blue Firth, Linder, Goshka Macuga, David Noonan, Alexis Marguerite Teplin. Curated by Alex Farquharson, it is accompanied by a symposium on Byron, Dandyism, and the pop culturalization of the Gothic by authors Michael Bracewell, Philip Hoare and Sebastian Horsley, on the afternoon of the opening performances by Marcia Farquhar. 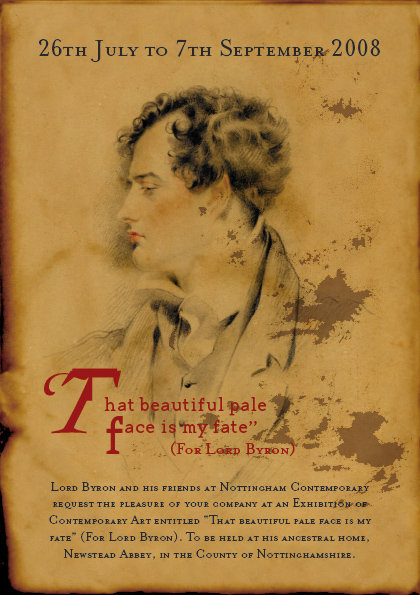 For the third major off-site project in the year before we open, as part of our Histories of the Present, Nottingham Contemporary presents an exhibition amongst the personal effects of Lord Byron in his splendidly atmospheric ancestral home, a few miles north of Nottingham. The stately home is a Renaissance structure grafted onto the remains of the original Abbey, which Henry VIII dissolved in 1539. Byron unexpectedly inherited it at the age of 10 in a state of ruin. He restored and furnished half a dozen rooms, while the rest of the house remained Romantically abandoned, used for pistol practice and to house his menagerie, including his bear. Newstead immediately became the architectural embodiment of English Romanticism in general and the Byronic in particular, inspiring Thomas Love Peacock's contemporaneous satire, 'Nightmare Abbey'.

That Beautiful Pale Face is my Face (For Lord Byron) is an amorous séance that attempts to establish contact with the legendary poet, then and now. One of Goshka Macuga's tributes is a table in the shape of Byron's profile, his facial features and personal attributes represented by pen nibs and a broken bottle. Linder has made a large collage on an antique paravent, similar to the one Byron had pasted with pugilists and actors. Marcia Farquhar haunts Byron's dressing room with a sound piece featuring the dissolute recollections of Byronic men from her Punk years. She is also inserting their relics amongst Byron's own memorabilia. Pablo Bronstein has republished various obscure Gothic novels from Byron's day in small editions with self-illustrated covers. Alexis Teplin is showing objects that appear to be inspired by a Regency-era Dandy's wardrobe. The peacocks that still strut Newstead's lawns, along with Byron's taste for the theatrical, are invoked in a large silkscreen by David Noonan. Ulla Von Brandenburg has occupied the room off the medieval cloisters Byron reputedly used as his plunge pool with a brief 16mm apparition, and Blue Firth has customised the fountain in the middle of the cloister's 'Mary Garden' with a large wooden pentagram.

Byron was loved by legions of men and women in life and in death. He was the prototype of the modern day celebrity: magnetic, scandalous, ambiguous, mysterious, rebellious, brave and beautiful, as brilliant as he was destructive. The title of the exhibition is attributed to Lady Caroline Lamb, his besotted, cross-dressing lover, who wrote it almost as soon as she first saw him.

Byron's performance of his sense of self was complex and elaborate, particularly with regards to gender and sexuality. That performance seduced, shocked and confused his contemporaries. Together with his internationalist political activism, it accounts for his apparent modernity, and his lasting appeal after feminism, in an age of more open and diverse sexual expression.

This exhibition offers up some signs of his continuing attraction. Curated by Alex Farquharson, Director of Nottingham Contemporary, it is accompanied by a symposium on Byron, Dandyism, and the pop culturalization of the Gothic by authors Michael Bracewell, Philip Hoare and Sebastian Horsley on the afternoon of the opening on 26 July, preceded and followed by performances by Marcia Farquhar.

Nottingham Contemporary will be one of the largest contemporary art centres in the UK when it opens next year in the centre of the city in a new building by Caruso St John.