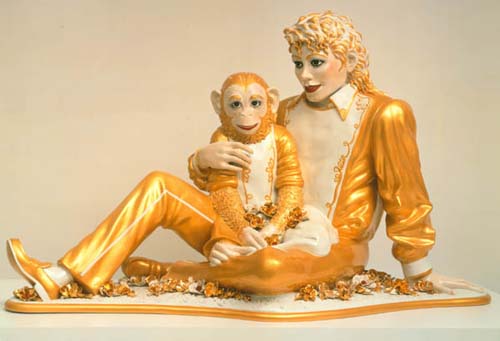 February 2 - April 7, 2002
CLAUDE RUTAULT - The painting in the same colour as the wall

French artist Claude Rutault makes instructions for paintings that are the same colour as the wall. With simple means, he examines and develops the painting's bounds, and creates art that has an effect beyond the object itself.

Focus on "Michael Jackson and Bubbles" by Jeff Koons

In connection with this first presentation to the Nordic audience, Jeff Koons will visit the Museum and give the lecture "Jeff Koons by Jeff Koons" on Friday 8th February.

January 19, 2002 Astrup Fearnley Museum of Modern Art will open a new exhibition entitled PASSENGER - The Viewer as Participant. The exhibition is one of the MuseumÂ´s most ambitious to date and focus on the viewers position and role in contemporary art. It includes works by 26 internationally well known artists from the early 1960's until present. Last day of the exhibition is April 21, 2002.

At the core of the concept for this exhibition is the question of an aesthetic shift away from the accentuation on the visual autonomy and self-contained independence of the artwork to the development towards a greater emphasis on the viewer's active involvement. Often we find ourselves given the role as a kind of participant or "passenger" in the artwork. Confronted with objects, environments, video installations or interiors we are tempted to touch, move or participate in the "game".

The art of the 1960's are of crucial importance in this respect and the exhibition is organized as a dialogue between influential artworks from this period and art and activities from the last decade. Allan Kaprow's early happenings are of crucial importance in this shift, as are Jasper Johns' and Andy Warhol's paintings of the late 1950s and early 1960s. Both the Fluxus movement, Minimalism, Post-Minimalism and Arte Povera imply a new relationship between the artist, the artwork and the viewer. In the exhibition you will find Piero ManzoniÂ´s Base Magica (1961), Michelangelo PistolettoÂ´s 'Mirror Paintings', a documentation of Yoko OnoÂ´s performance Cut Piece and one of Bruce NaumanÂ´s video corridor put in dialogue with related artworks from the 1990s like Felix Gonzalez-Torres take-away-stacks of prints or sweets, Rirkrit Tiravanija's social activities, Douglas GordonÂ´s video installations and Andrea Zittels furniture related works to be reconstructed and used.

Curator Oystein Ustvedt is responsible for both the exhibition and the catalogue.

During the exhibition period it will be both a lecture and a happening by Allan Kaprow and a performance of Yoko OnoÂ´s "Cut Piece".