Being. Group show. What and who is this love, in which one gets involved and in which one would like to live? 11 artists examine, analyze, encircle this actual condition and unite in the exhibition the most dissimilar facets of this beautiful and at the same time difficult topic. 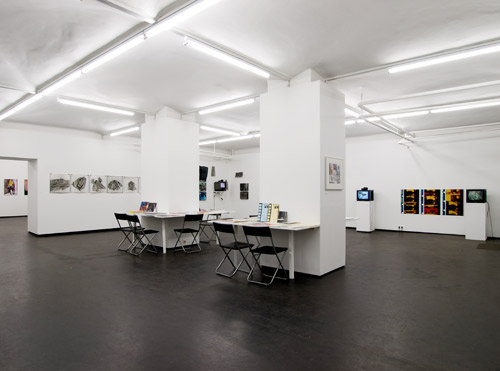 This year’s focal point deals with the one of the existential aspects or our lives: LOVE. In three exhibitions LOVE I – Searching, LOVE II – Being, and LOVE III – Collapsing spans the range around a difficult, delicate and emotional topic.

LOVE II – Being:- What and who is this love, in which one gets involved and in which one would like to live? 11 artists examine, analyze, encircle this actual condition and unite in the exhibition the most dissimilar facets of this beautiful and at the same time difficult topic: The Ode to the incredible luck, the search for the tenderness of respectful love with touches, the intimateness in lust full lived sexualities, the fear of failure, the internal litmus tests, The love is singular and always different. She does not adapt to any standards. Therefore each situation is an individual love poem about the courage of devotion.

Arnis Balcus Myself, Friends, Lovers and Others

Balcus breaks through the barriers between public and privacy; he directs the camera toward himself and his generation (in the style of N.Goldin or W.Tillmans). His snapshot-like photographs are studies about sexuality, tenderness and familiarity, in which the carefree, longing and at the same time also promiscuous awareness of life of very young people are captured and visualized.

Hermann Capor One sees what one sees

Hermann Capors work is at the same time serial and single photo. The temporal operational sequence one „la petite mort “shows the changes in the features of a woman. The seconds of ecstasy are carefully collected and conserved - an homage to sexuality and the play between man and woman, whereby the camera takes the position of the lover. Neither voyeurism nor the standards of pornography are satisfied here. The work clarifies intimacy and respectful caution in handling the fragile perishability of love.

Krinzingers detail photographs move the eye almost threateningly close to the most sensitive and intimate body parts. Made anonymously but at the same time direct the skin becomes a border to personality and the outside world and a place of communication between humans. Touches as moments of the sensuality and vulnerability at the same time. The abstract quality of the enlargements captures the viewer into an emotional “map” of possible feelings and impressions.

Paul Albert Leitner The Miracle of Love Leitner - the traveler, the Flaneur, the observer, the collector of impressions. With his camera he records the poetry of the moment and the event. Over the years his growing extensive picture archives also contains one of its main topics: love. Pieces of found pictures from the public area such as posters, shop windows, humans, as well as newspapers and films are gathered for the exhibition and consolidated in a poster wall made from photocopies.

Brigitte Niedermair Lets go fishing und do we need all this

Niedermaiers ironic picture worlds bring up for discussion the sexual self-determination of women. She produces pieces and objects with sexuality bringing them into association with sensuous still life’s and examines in her work the situation of women with an active sexuality, thus sketching feministic role models like the woman as huntress.

Marleen Noordergraaf The Potential of Love

Noordergraafs photographic travel focuses the absolute- in reference to R. Barthes “Punktum” of love. As in a mythical narration she tries to catch the fleeting moments that take the guise of love. Always in dichotomy with given and determining conceptions and ideals the love materializes itself often differently than planned. Noordergraaf holds long conversations with humans, which she first confronts on the street and consequently photographed starting from the moment where she becomes “forgotten “. The photo work presents themselves as analytic, sensitive, and non-posed, in which the camera as observing object recedes into the background.

A short adventure film, from the myth of humans, deals with the fearless and the civilization weary of the contact with nature and „exposes itself to her “acts. The video shows a pair who dives uncovered into the darkness of night and can be read as a metaphor for „ mutual exposure “. The intertwined trust of the protagonists is noticeable. A song by Simon & Garfunkel functions as a musical embedding of the action “I am a Rock“: I am a rock; I am an island; and a rock feels no pain; and an island never cries…

Puchner shows an unusual picture: old people, who dare a new beginning with one another, and again indulge in, love whom only met after their 70th year of life. It portrays them and tries to do so without posing. His photographs show in a careful and sensitive manner moments of privacy – when one another face each other. Embraces, contacts - the beauty and the courage of genuine feelings at the fringe of old age. A taboo topic within our society.

Speaking pictures: Mausi, Schatzi, Darling, Cherié,…. - those help to alleviate the absence of the partner locally. The facet wealth of pet names is almost boundless - changing between embarrassment, heart fullness, intimacy and privacy. Rukschcios models function in two ways as Portrait: on the one hand its occurrence, its behavior, its clothes and its manner of speaking informs about the personality of the designations as well as the designated ones and their social detection, on the other hand the pet names and the mimic permit conclusions when expressing the same within the couples relationship.

Schumanns photographic double exposure are kaleidoscopic introspection. Different emotional like temporal moments are overlaid, those by a lover told varying between euphoria and pain, proximity and distance, to hold and to hide. Aspects of passion, affect and in the special physicality, are underlined by the doubling in the work: On the one hand by emphasis in the illustrations and on the other hand by the selected form of presentation as „the picture’s body “- as object.