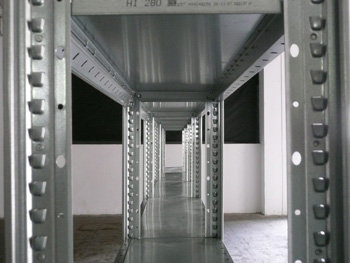 Densification is the word which best shows the way in which the project is located within the concept of a collection and its presentation. It is not scrupulousness, regularity, archivability, predictability or a defined way of looking that plays a role here but subjectivity, openness, potentiality, heterogeneity and ambiguity. This is the second version of this project, which last autumn took on the form of curatorial workshops, a presentation of the "Mobile Archive" from the Digital Art Lab in Holon and Elzbieta Jablonska's performance "Kitchen".

"The Impossible Collection" is an exhibition of the collection of the Wyspa Progress Foundation, translated, transferred, taken to impossibility. A collection usually constitutes one of the traps of the institutional format. Its exhibition often builds definitions, generates unambiguity, systemises permissible meanings. "The Impossible Collection" is an expression of resistance, a call for the variability and modality of the way of exhibiting and viewing and an appeal for an active viewer who will give it new life.

"The Impossible Collection" is a series of forms of accumulation, a set of works from collections, archive materials and books. It is also a series of interventions and ephemeral events planned by the Wyspa curators and invited guests. This is not an exhibition of the "best in the collection" type but an attempt to provoke new readings of the very phenomenon of collecting and to build minimal, ephemeral, individual meanings between works and collections.

It also recalls the earlier realised projects of the Wyspa Art Institute and their influence on the thickening of the material and notional communications of institutions.

The Wyspa Progress Foundation has been collecting artists' works since 1995 and its first spectacular presentation, entitled "A Collection of Contemporary Art on the Occasion of Gdansk's Millennium", took place in 1997. Since that time, the collection has grown thanks to donations from artists, without public support and outside the system of regional collections of contemporary art. This is also another dimension of its "impossibility".

30 August, 6 pm
Nina Möntman will lecture On how to belong to your Art. Institution. Art Institutions in a Situation of changed Public Interest.

29 August 6 pm Livia Paldi „Balázs Béla Studio" a lecture dealing with the issues of integrating this specific archive-collection into the Kunsthalle Budapest and its programmes, as well as about the questions of presenting it, and its cultural-political history in the form of an exhibition.

The exhibition is part of the three-year-long project entitled "Translate", initiated by the European Institute for Progressive Cultural Policies and financed by the European Commission. The project in Gdansk is also supported by the Baltic Property Trust.