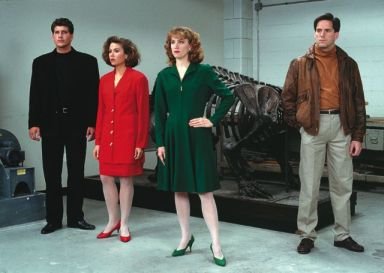 This exhibition is the first showing in Ireland of the slide-tape installation Background, 1991-94, by the internationally-acclaimed Irish artist, James Coleman. Background, 1991-94, is one of a trilogy of pioneering works by Coleman from the 1990s, acquired by IMMA through funding from the Heritage Committee of the National Cultural Institutions in 2004. This is the final work in the trilogy to be presented in the Great Hall at IMMA, following the successful showing of I N I T I A L S, 1993-94, in 2006 and Lapsus Exposure, 1992-94, in 2007. Coleman has been associated for over 30 years with a range of media that dominate large areas of current art practice. He uses the photograph, the projected film still, the transparency, the slide show with sound track, and the film, as powerful means of conveying his reflections on the meaning of image and language. Communication, subjectivity and the use of media are central concerns in Background. Using the slide-tape format, Coleman continues his investigation of the psychological, social and historic conditioning of perception.

Born in Roscommon in 1941, James Coleman has exhibited extensively since the 1970s in international museum and galleries, including the Dia Center for the Arts, New York, 1994-95; Kunstmuseum Luzern, Lucern, 1995; Centre Georges Pompidou, Paris, 1996; Fundació Antoni Tàpies, Barcelona, 1999; Kunstbau Lenbachhaus, Munich, 2002; Sprengel Museum, Hannover, 2002, and Museu do Chiado, Lisbon, 2004-05. In 2003, Coleman developed a unique project at the Louvre in Paris for the exhibition Léonard de Vinci: dessins et manuscripts. Coleman has also participated in many international group exhibitions and recently in documenta 12 in Kassel, where he showed Retake with Evidence, 2007.