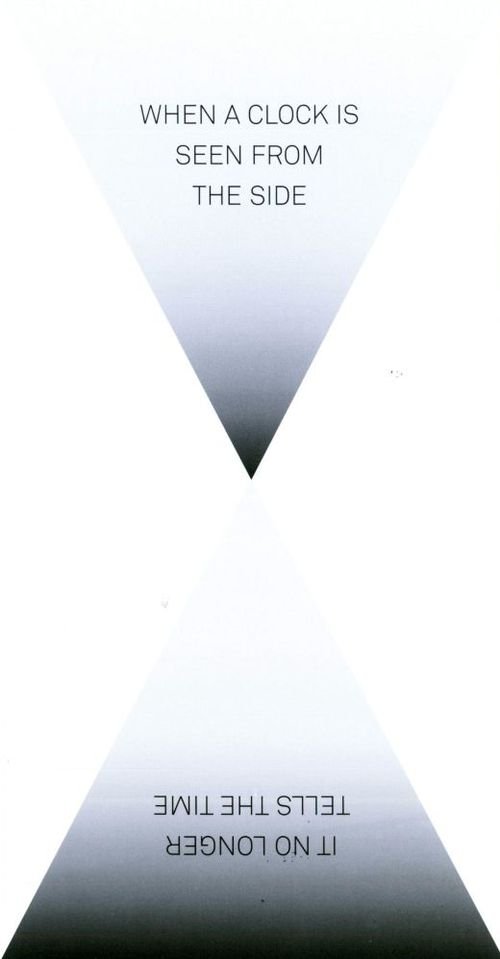 With the postcard series 'I Got Up At', On Kawara initiated a self-imposed ritual which resulted in the synchronization of everyday occurrences and specific places. Rubber-stamped with the date, he sent them for decades to his friends and acquaintances from the different parts of the world he visited. Based on this piece from On Kawara we have put together a group exhibition featuring young artists' work referring to time and space, using diverse media such as performance, photography, film and sculpture.

'Amnesie' (2003) was how Evariste Richer named his Photo-collage depicting two different states in the concluded construction of one house. Contrary to the general assumption that a house is normally enlarged in the process of reconstruction, this work pursues a very subtile, opposite procedure. In his installation 'End of Time' (2008), Jordan Wolfson shows the failed interview with a man who claims (and has been widely quoted) to have lived in the future. A different notion of time in life is also present in Taryn Simon's photographs, which portray two rabbis waiting for their Messiah in their own individual ways. The immanent significance of time and space also plays a role in the projects from Walead Beshty, Mario García Torres or Johannes Wohnseifer, amongst others. Beshty sends a glass box as a Fedex package from Los Angeles to Berlin, resulting in the exhibition of an object broken on its way to the gallery.

The piece '24 h meter' from Wohnseifer consists of a styrofoam bar casted in aluminum, which the artist does not let go of in a period of 24 hours. On the other hand, Kirsten Pieroth and Alicja Kwade make reference to perception of the time hierarchy within the moment of observation. Pieroth's brush has never been used before but looks as if it has. With a severely slivered steel board, Alicja Kwade simulates a material's properties, creating a spontaneous moment which is actually hiding a much longer work process. Other works deal with the time factor in painting and the diary as a replacement for memory or events in the past.