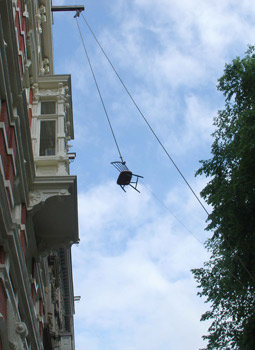 Johanna Billing uses video to portray group interactions, individual identity and social structures, capturing situations of societal change. Her multilayered interpretations of places and circumstances oscillate between documentary and fiction, merging an interest in the real and the improvised with a precise and minimal cinematic language. Always staged, the looped video installations dwell on routines, rehearsals and rituals, presenting us with people in concentrated situations, where changes are taking place, are about to take place or could take place. Billing's films often involve music, which in her hands becomes a medium of exchange, memory and reconstruction.

Billing will present film works, photographs and a documentation archive produced between 2001 and 2008.

Johanna Billing (b. 1973 Jönköping, Sweden) lives and works in Stockholm.

Isa Genzken's diverse oeuvre includes sculpture, relief, collage, film and photography. Genzken has often used assemblages as a point of departure and fearlessly integrated ready-mades such as wheelchairs, walkers, jukeboxes, armchairs and umbrellas into her sculptures. By combining all sorts of materials and doing intense juxtapositions Genzken has created powerful and playful sculptural work throughout the 80's, 90's and 00's.

Sergej Jensen's minimal paintings draw on a wide range of materials and formal references. Jensen uses the material and its possible sews, bleaches, stretches or stains to create lyrical, abstract compositions.
Fabrics like linen, silk, wool or flags and old moneybags are used and
treated almost as recycled ready-mades. The canvases have many tactile gestures, and flecks of wool or frayed edges become part of the artist's palette for his paintings.

The exhibition is produced in collaboration with Bergen Kunsthall and includes more than 40 works produced between 2001 and 2008.

Sergej Jensen (b. 1973 Maglegård, Denmark) lives and works in Berlin.

Josef Strau works as an artist and writer, but has also experimented with the social roles of curator, musician and gallerist. Strau uses his writing and stories as part of his sculptural and conceptual work. The texts are often rapidly written and unpredictable, often shown as posters, on the floor or incorporated onto found modified lamps and objects, so the installations create 'narrative spaces'.

At Malmö Konsthall, Strau will present A DISSIDENCE COINCIDENCE BUT WHCTLJS, an installation consisting of texts, lamps and other objects within a labyrinthial construction of the large scale letters WHCTLJS. The letters in the title WHCTLJS are part of a riddle. It can be read as a private and existential riddle, that may be solved whilst walking-reading through Strau's installation.

Josef Strau (b. 1957 Vienna, Austria) lives and works in Berlin.