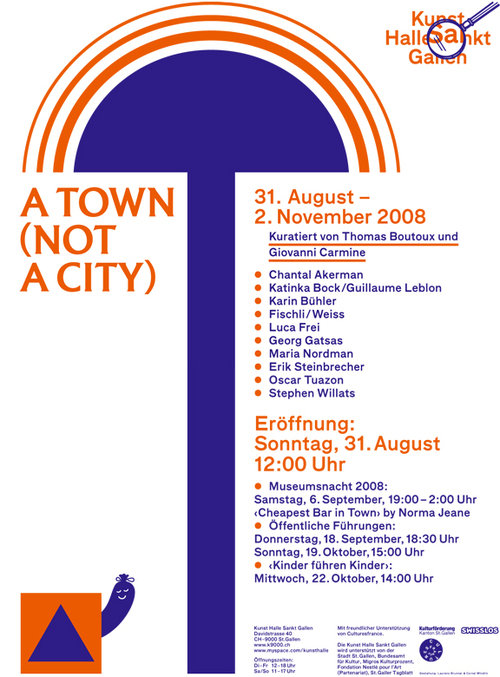 The Mittelstadt, the peripheral or provincial middle-size city, is the hometown of many, a site of thick emotions and experiences. For some, it can be associated with feelings of serenity, humanity or truthfulness, while others relate it to isolation, melancholy and boredom. As a characteristic cultural and social place, and despite its ubiquitous presence over the globe, the Mittelstadt has raised among urban theorists and cultural thinkers far less interest than other urban forms or phenomena such as the capital city, the metropolis, or even the sprawling suburbs. If we think of recent art exhibitions that have taken the urban life for subject, it is obvious: almost without exception, they all tried to explore the recent mutations of the global metropolises by showing art that has come out of and reflects its particular nature – vibrant, chaotic, unpredictable, hybridized, mother of all creative innovations, momentums, and forward-looking ideas – and no real effort was made to actualize our understandings, descriptions and representations of smaller cities.

"A Town (Not a City)" is an exhibition that wishes to contribute to the understanding of the changing relationships to modern urban life by examining affects – negative or positive – proper to smaller cities, in contradistinction with metropolitan experiences. The project follows the hunch that an art exhibition can probably better narrate, translate and animate the experiences and feelings that are characteristic of the smaller cities – and thus add to their intelligibility – than it can satisfyingly convey the turmoil of capital cities, their sheer complexity. This change of scale, it is believed, grants artists firmer grasps to the city-life experience: spaces stand out in a clearer light as pivotal social ones in the Mittelstadt, whereas persons can easily take the status of characters in such localities where the probability of repeated encounters gets higher than in the metropolis.

Spreading over less than 40 km2 and with a population of 75,000, St. Gallen is an exemplary case of the modern Mittelstadt. It offers an excellent research ground to investigate the changing characteristics of the provincial city, how it enmeshes in the complex mix of contemporary global forces, or how, simply put, it is lived out today. As such, St. Gallen claims to offer its inhabitants both some sort of ideal small city life, and a key role in a global condition, as it is well-connected to many other cities, far and close. St. Gallen is thus a model of a city that its inhabitants can be nostalgic of when they have left it; that can stay unquestioned as a site for passing one’s whole life; to which people might want to move to in order to live a better life; but also, a city that can sometimes be lived, especially in the experience of teenagers and the youth, as too promiscuous and apathetic, almost potential- and horizon-less in comparison with the larger city.

Yet, the exhibition "A Town (Not a City)" is not a project about St. Gallen. In order to escape the pitfalls of documentation and the risk of orientalizing the local that such a project would bear, the exhibition has been designed to enable a dynamic oscillation between the specific and the generic, between the peculiarities of St. Gallen itself, and a reflection on the Mittelstadt as an abstraction. For this reason, "A Town (Not a City)" includes a number of ‘historical’ works, which have been created without relation to St. Gallen and refers instead to other cities, at different times: Brussels in the 60s for Chantal Akerman, the suburbs of London in the 70s for Stephen Willats, Antwerp in the 80s for Maria Nordman and Zurich’s outskirts in the 90s for Fischli/Weiss. These works ground the show in its thematic, and typologize several artistic methodologies that embrace the urban environment. The other works presented in the show are, on the contrary, new productions signed by a cast of international younger artists who have been conducting site research in St. Gallen and articulated answers to the very project and context of this exhibition. This group includes St. Gallen artists Karin Bühler and Georg Gatsas, Paris-based artists Katinka Bock and Guillaume Leblon, American artist Oscar Tuazon, and Swiss artists Luca Frei and Erik Steinbrecher.

By initiating a reflection on the Mittelstadt city life and the question of scale, "A Town (Not a City)" hopes to have direct repercussions on the ways the inhabitants of St. Gallen think about and understand their city. It also wishes to stress the role of the Kunst Halle as a specific spatial and social place in the city, and of contemporary art as a catalyst of civic imagination, an irreplaceable contributor to public discourse.

For questions and further information please do not hesitate to contact Giovanni Carmine at carmine@k9000.ch or Cynthia Krell at krell@k9000.ch.

Guided tours in German: Staff of the Kunst Halle Sankt Gallen will guide through the current exhibition. No reservation necessary!

"A Town (Not a City)" is supported by Culturesfrance.