Moths to / from a Flame. In this exhibition we are confronted with work composed of overlaid materials, set out or classified in series, as if a gallery were to assume the task of providing a metaphor. Here it looks like a laboratory has been set up for staging experiments to determine something as yet unformed. 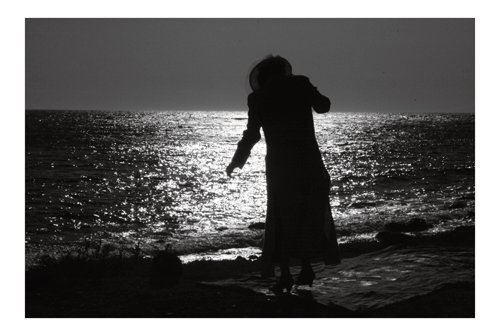 Makiko Nagaya completed her Masters in Visual Art at Goldsmiths College to qualify as a curator in 2002. Her practice since has resisted the obligatory compromises demanded by institutions of curating to the affirmation of art, coinciding both the making and displaying of specific works in collaborations. This principle is marked of an intelligence that follows certain trajectories from the history of art and the function of the gallery or museum in their related fields of knowledge, directed to the problem of illusion. Sustained from a mutual interest in the early experiments of psychoanalysis, film and fashion, these concerns also have submitted themselves to scrutiny as remainders of, or cast-outs from the 'cocoon' of 20th Century's idealisms. In Moths to / from a Flame we are confronted with work composed of overlaid materials, set out or classified in series, as if a gallery were to assume the task of providing a metaphor.

Here it looks like a laboratory has been set up for staging experiments to determine something as yet unformed. This is an art, the title suggests, that is drawn fatally to the beauty of the unnamable. It is 'occult' only in so much as the action and result of an imprecise chemistry, whose insolubility marks 'the accidental' through invocations of ritual. The works that present themselves at T1+2 Gallery cohere as an ordering and disordering of found objects, sounds and pictures. Nagaya makes a detour through world history, from Japan, Europe via the New World of late 19th Century colonialism, dimly registered in the white noise of the past whose flickering images of cultures are glimpsed and lost through the ensuing catastrophic flames of the 20 th Century to emerge in new forms. The message is in the medium applied in the Rorschach psychological test, now discredited as an empirical tool, to a broader horizon. The typical Rorschach illusion of capture is made by testing the fugitive, which very often is released in the 'moth and flame' imaginary. Hermann Rorschach invented the psychological test in 1921 based upon a children's game.

Here the Rorschach is stretched to the topology of an audio-visual panorama composed of serial works in painting, photography, fashion, video and sound. For T1+2 Gallery artists Joe Banks, James Early and Johnny Vivash will work with Nagaya from multiple sources that include sampling from Martin Scorsese's adaptation of Edith Wharton's classic novel of late19th Century high bourgeois society, The Age of Innocence, (1993) in which a connoisseur's collection of Symbolist landscapes, antique Oriental porcelains and prints constitute an important function of mirroring their protagonist's fading illusions of prized grandeur and innocence. Nagaya has taken the dialogue as the source for making series of 'Rorschach' paintings. These 'sentence-images' are displayed horizontally as an index of Rorschach tests, transforming the script into an image directly. Banks' research into the evidences of Rorschach Audio, and Electronic Voice Phenomena, produces affects from auditory stimuli as illusory experiences (of which the distinction between illusion and hallucination is important).

James Early's video works investigate film personae as a psychological illusion of identification generated to and from the 'sympathetic magic' of the screen as if a mirror. Vivash's well-known portrayal of characters slowly breaking down, are here tested and subtracted from attempted tableaux vivants, posed in the manner of Kabuki theatre. Nagaya has also invited craftspeople such as a metal welder and seamstress to make objects from drawings in part derived from the film. Displayed on tables fabricated in mild steel, Rorschach tests echoing the panoramic frieze portrayed in the film, are complemented by production photographs taken on location on the island of Patmos, where in exile, St John the Divine wrote Revelation, arguably the ultimate tabula rasa of meaning and nothingness. In mimicry of Warhol's Rorschach paintings, (1984), Nagaya sets traps for interpretation. Dresses present the sewing of an unknown seamstress; porcelain from 19th Century early industrial productions and Japanese Imari have been set in clay; various off-cuts of patterned silks and dyed linens collected from Japan, accrue to present, at first glance, an archeology of frivolity.

This is a delicate suture, or stitching, of incompatible materials and employments; precarious, since it is the movement in one direction from utility to inutility, and in the other, from valuable to invaluable, that coincides the trajectories of the poetic and prosaic. Quoting Marcel Broodthears, 'What is it? In fact it is objects'. Makiko Nagaya was born in Nagoya, Japan in 1975. She is an artist and curator, the co-director of Redux Projects in London. Nagaya was Associate Curator of works by Japanese artists at the 6th International Sharjah Biennial, 2003. The co-direction of Redux (research, exhibition, documentation, urban experiment) continues a working relationship with Peter Lewis commencing a series of 50 projects that invites artists into specific collaborations and projects. This has initiated various productions, exhibitions and performances, screenings and music collaborations, which have established a new and broad definition of the curator's role as a facilitator and artistic co-producer.