The Museum of Modern Art - MoMa

Here Is Every. Four Decades of Contemporary Art maps a chronological path through the art of the recent past. The exhibition brings together photographs, paintings, sculptures, drawings, films, and videos in thematic groupings, and includes several new acquisitions. New Photography is the annual fall showcase of significant recent work in photography. This year's exhibition features the work of Josephine Meckseper and Mikhael Subotzky. Lucy McKenzie combines painting, printmaking, and drawing with public events such as concerts, poetry readings, and performances. 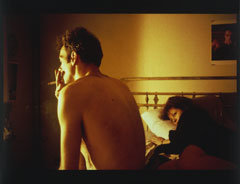 The fifth in a series of installations in the Museum’s second floor Contemporary Galleries, Here is Every. Four Decades of Contemporary Art maps a narrative through the art of the recent past. Drawing together works of film, photography, paintings, sculpture, drawing, and video, the exhibition will feature approximately 150 works and will highlight themes between carefully selected groupings of work. Explorations of topics as diverse as the artist’s studio, the changing urban landscape, politics, and the radical transformation of media culture ultimately transcend chronology, appearing repeatedly in the art of different decades. The exhibition will include several major recent acquisitions never before on view at MoMA, by artists including Matthew Barney, Tony Conrad, Paul McCarthy, and Bruce Nauman. Organized by Connie Butler, The Robert Lehman Chief Curator of Drawings, The Museum of Modern Art.

New Photography is the annual fall showcase of significant recent work in contemporary photography. This year’s exhibition features the work of Josephine Meckseper (German, born 1964) and Mikhael Subotzky (South African, b. 1981). In her photographs and signature vitrine displays, Meckseper explores the media’s strategy of mixing political news and advertising content. Her installation includes a selection of life-size photographs of models dressed in vintage lingerie from the 1950s from the Blow-Up series (2006), and Quelle International (2008), a new group of pictures printed on reflective Mylar that have been culled from a mail-order catalogue popular in Germany in the 1970s.

In both series the artist uses the semantic codes of advertisement to address issues of power and consumerism. Subotzky’s recent body of photographic work Beaufort West (2006-2008) portrays a small desert town in South Africa’s Western Cape blighted by unemployment, rampant crime, domestic violence, poverty, and segregation. The artist was drawn to this subject by the local jail, which is strangely situated in the center of the town in a traffic circle at the intersection of the main highway between Johannesburg and Cape Town. His photographs of Beaufort West’s various populations—inmates, outcasts, families, residents, and passersby—formulate a stirring vision of South Africa’s strained post-apartheid condition. Organized by Roxana Marcoci, Curator, Department of Photography.

The New Photography series is made possible by JGS, Inc.

Projects 88: Lucy McKenzie presents a site-specific installation of newly acquired paintings and prints by artist Lucy McKenzie (Scottish, b. 1977). McKenzie’s work questions the politics of representation, among other topics, and confronts the ways in which women have historically been portrayed in the media. Her practice incorporates painting, printmaking, drawing, and public performances such as concerts and poetry readings that reference historical models of artist clubs or salons. In 2007, McKenzie started the interior decoration company Atelier with illustrator Bernie Reid (Scottish, b. 1972) and fashion designer Beca Lipscombe (Scottish, b. 1973) to collaborate on designing public and private social spaces.

For this exhibition, their first commission for a museum, Atelier has created an installation that emulates the décor of a turn-of-the-century library. Mural paintings recreating walls paneled in dark wood take their inspiration from Art Nouveau architect Paul Hankar, while the stenciled carpet on the floor derives from design motifs by Gothic Revival architect Augustus Pugin. Organized by Christophe Cherix, Curator, Department of Prints and Illustrated Books, The Museum of Modern Art, New York. The Projects series is coordinated by Kathy Halbreich, Associate Director, The Museum of Modern Art, New York.