Your fear as an external object. Through works by artist from diverse social contexts, the exhibition focuses on the psychological effects of the violence and terror that comes to dominate more and more the media and our daily life. 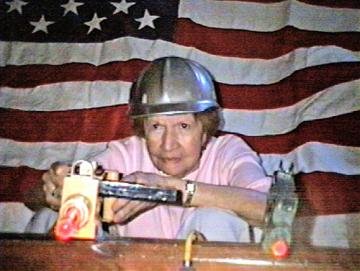 Through works by artist from diverse social contexts, the exhibition focuses on the psychological effects of the violence and terror that comes to dominate more and more the media and our daily life.
Testing the boundaries between the clichéd image of human violence as mediated by the camera, on the one hand, and its contemporary forms and mental impacts on the other, the exhibition explores the “gray zone” between the constructed and imaginary notions of terror, its mediated image and our real fears. The show was inspired by Johan Grimonprez’s film Dial h-i-s-t-o-r-y (1997), a hypnotic composition of documentary footage of plane hijackings from the 50s to the 80s, whose meaning has changed significantly since 9/11.

Seven years have passed since the event that was to mark the beginning of the global consciousness of terror, and the period has seen a great many analyses of the event itself and the role of the media in it. It has been discussed in several contexts how violence represented by the media influences our real and fictitious sense of fear, in societies whose outlook today is global. Examining the power and flexibility of the camera-mediated image, the exhibition focuses on the perception and interpretation of violence and terror filtered through media, and explores to what extent we identify with, or remain resistant to, it.

Is there a trend in the contemporary image of violence, and if so, what are its characteristics? And how can someone possibly use an image of aggression today without being clichéd? The featured artworks highlight those characteristics of the human condition today that are generated by mediated images of cruelty: fear, paranoia and frustration. They point out that our sense of mental security and social identity are more affected by the image of terror than by any other kind of images in the global media environment. The refined and complex modes of artistic representation echo the characteristics of a more and more intricate and vulnerable society. Violence as a deeply rooted unconscious instinct dominates the written history of humankind, and its images are present in culture since the earliest representations. Growing fear in contemporary western societies and the manipulated representation and notion of violence has modified its imagery, together with its perception and interpretation. The exhibition seeks to show how contemporary artists are dealing with, and relate to, the image of violence in the world of spectacle. As Susan Sontag argues, the mediated image of aggression can only be abstract and historical in that it is not based on personal experience.
Is it true that terror is less spectacular today from the viewpoint of global media than it was twenty or thirty years ago, as Nicholas Mirzoeff claims in his recent book? What about the viewpoint of contemporary art? Sontag recalls that 9/11 was described by survivors as being “unreal”, “surreal” or “like a movie.” Is it possible that the reality of violence can indeed be perceived only as another reality? Through the works of eleven international artists, the exhibition attempts to analyze the current correlations between violence, fear and spectacle, and to test our awareness of these by investigating the notion of violence, usually distant and distorted by current politics, on a human level.

Performance:
The opening day is also the premiere of Andrea Schneemeier’s performance Anxiety Theatre. On September 11th, as part of a discursive project of several components, Schneemeier will set up the Temporary Office of Fear in busy public spaces in Budapest, where she asks passers-by to share their fears with her. The collection of documented personal fears will be shown in the gallery after the performance.