Kendell Geers' work is strongly infl uenced by the social and political conditions which could (and still can) be found in South-Africa, namely the apartheid. Since the beginning of his career Lori Hersberger has been alternately working with painting, architecture and video. The exhibition serie Rendez Vous is understood as a platform for mutual exchange. It has the aim to help young artists to establish their international and professional networks. Make on the walls of the Museum, Christian Lhopital' drawing invests the entirety of a room almost like an installation. 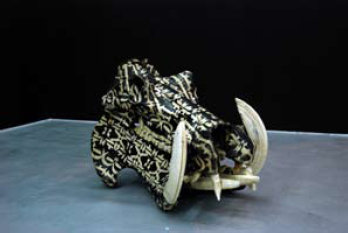 Kendell Geers lives and works in Brussels and London.

Kendell Geers’ work is strongly infl uenced by the social and political conditions which could (and still can) be found in South-Africa, namely the apartheid. Therefore, he continuously uses a wide variety of different materials deriving from the political and he often utilizes a violent mode of expression to articulate his artistic points of vue. His art is characterized by a multiplicity of media used (objects, installations, videos, performances), but in a very coherent way. Geers calls himself a “terrorist” in the field of art, i.e. through his art he wants to take a fi rm stand: He explores and criticizes our world in a very confrontational manner by turning his gaze to the phenomenon of alienation which he discovers in many objects, images and situations of the everyday. However, this critical positioning does not end up in a one-sided approach. On the contrary, it constantly questions the conditions of good and evil and the interdependance of these principles which underly all things. By also adressing himself to moral and political issues as an artist, Geers refl ects on the way exhibitions works, on the conditions of art in general and on artistic institutions as well as their protagonists in particular. Finally, through his art Geers enters life in a very comprehensive way and negotiates its bright and dark sides and its “dangerous beauty” which he searches in his personal experiences and which he always places before his art.

This European show, always changing in each museum, represents the first extensive retrospective of the artist. It covers different aspects which run like red threads through Geers entire oeuvre, e.g. questions of geography, linguistics, politics, society, sexuality and psychology. On the occasion of the show at the museum the artist has specially created new artworks for the exhibition space.

Lori Hersberger was born in Basel (Switzerland) in 1964 where he studied video and sculpture at the art academy in the early 1990s. He lives and works in Zurich and Basel.

Since the beginning of his career Hersberger has been alternately working with painting, architecture and video. And since the late 1990’s he has also been experimenting with the usage of colour and with the shaping of space - these being two fundamental questions which, in fact, underly his entire artistic search. By making use of real mirrors in his works, Hersberger attempts to evoke a particularly intense atmosphere. Serigraphy, fl uorescent inks and neon colours determine the rhythm of his installations. By his gesture (spraying, dripping or making use of sponges), colours go beyond the frame, penetrate the surrounding walls or squirt the mirrors lying on the floor.

On the occasion of the new exhibition at the Museum of Contemporary Art of Lyon the artist will specially create new artworks.

Since 2002 the exhibition “Rendez-Vous” has taken place once a year. It was initiated by Museum of Contemporary Art of Lyon in close collaboration with the Ecole nationale des beaux-arts de Lyon. In 2003 the Institut of Contemporary Art in Villeurbanne joined the two, and it is since this time that these three institutions coproduce the show. Priority to young and rising artists, who have recently graduated, as well as autodidacts are exhibited. The exhibition is presented alternately in each of the three places. For the 2008 edition, it will be held at the Museum of Contemporary Art of Lyon .

The exhibition is understood as a platform for mutual exchange. It has the aim to help young artists to establish their international and professional networks. The show wants to foster and to promote artistic creation of the Rhône-Alpes region. The project encourages artists to work with all media and in all genres: painting, sculpture, video, installations... and at the same time to create new artworks. The design of the exhibition is produced by young graphic designers. In 2007 a catalogue of 156 pages was published which presents each artist

At this year’s exhibition approximately 20 young artists will be presented to the public.

Twenty-four years after a first exhibition at which two large drawings are entered in his collection, the Museum of Contemporary Art invites Christian Lhopital to create a new work, produced by the Museum.

Make on the walls of the Museum, drawing invests the entirety of a room almost like an installation. Christian Lhopital deploys on the white wall and with the use of graphite powder, a material lighter and volatile that he applies directly with fingers or by rubbing with a cloth, a cloudy space. Of all emerging here and there, a pair of eyes, a head, an animal, characters, straight from childhood, but often taking finery demonic. From the anthracite magma, this black powder contrasts with the white of the support and becomes a drawing while shades of gray, shaped by the interplay of degraded.

In addition, Several films of Blaise Adilon will be presented in the conferences room.

Preview Thursday, September 18, 2008.
The artists will be present at the opening.