Paintings. A Los Angeles based artist, his surroundings have served as inspiration for his work. For this exhibition, Korty has expanded his subject matter to include scenes of New York, airports, and urban landscapes. 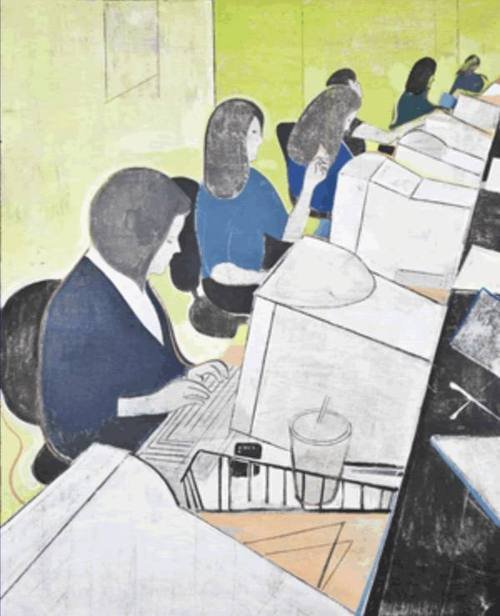 Michael Kohn Gallery is pleased to present its first exhibition of paintings by David Korty. A Los Angeles based artist, his surroundings have served as inspiration for his work. For this exhibition, Korty has expanded his subject matter to include scenes of New York, airports, and urban landscapes. His canvases are the culmination of those surroundings merged with his distinct style of abstract geometry.

On view will be a collection of paintings that portrays everyday objects and quotidian scenes and reveals a complex depiction of the geometric economy of the world. Korty's process is essential to the visual uniqueness of his work; he first captures his surroundings by photographing the ordinary and then transposes and interprets those scenes into his stylized renderings. His muted palette and hazy atmospheres invite the viewer to look closely at the painted surface and the graphic style which make Korty's paintings so resonant.

David Korty has been exhibited widely throughout the United States and Europe. From 2000-2008 Korty had solo shows at China Art Objects Gallery in Los Angeles and Sadie Coles HQ in London. He has also participated in several international group shows including, My Head is on Fire But my Heart is Full of Love at the Charlottenburg Exhibition Hall in Copenhagen, Painting on the Move at Kunstmuseum in Basel, and Painting Codes: I Codici della Pittura at the Galleria Comunale d'Arte Contemporanea di Monfalcone in Monfalcone, Italy, among many others.

David Korty was born in California in 1971. He attended the Rhode Island School of Design where he earned his B.F.A. He received his M.F.A. from the University of California, Los Angeles.