The exhibition examines the trompe l'oeil tradition and its various forms of expression in painting, sculpture, digital art, video and light installations. More than 140 works, from the Renaissance and up until the present day, are shown. We meet paintings by old masters like van Eyck and Gijsbrecht beside works by the surrealist Rene Magritte, the Swedish artist Otto G. Carlsund and contemporary pieces by Anish Kapoor, Christian Andersson and Olafur Eliasson. 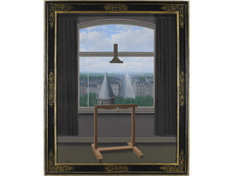 People do not usually like being deceived. But there are exceptions. As, for example, when we perceive something as real and three-dimensional though it is actually fictitious and flat. This autumn, the Nationalmuseum in Stockholm will open a major exhibition devoted to the playful art of deceiving the eye – trompe -l’œil. Visitors will confront some 150 works of art in different techniques chosen from five centuries and including large-scale contemporary works. See and be deceived! The exhibition will run from 25 September 2008 until 11 January 2009.

Western art has embraced such “illusions” ever since the days of classical Antiquity, though the term trompe-l’œil only dates back to about 1800 when it was minted in France. The exhibition at the Nationalmuseum in Stockholm will show examples from this witty and often beautiful tradition, featuring a succession of different techniques and dating from the Renaissance up to the present day. The exhibition portrays trompe-l’œil in a wide sense; deceptions in diverse forms and from numerous different epochs.
“Our aim has been to highlight a central genre of western art that amuses and fascinates us while it also raises questions about perception and art. Our ambition has also been to make the long lines of art history visible. The exhibition is the first of its kind in Sweden”, claims Karin Sidén, curator of the exhibition.

While the emphasis is on paintings – both older and contemporary – there are also photographs, sculptures, applied arts, prints, architectural drawings and landscape-gardening plans. The exhibition will fill three large galleries with their adjoining rooms. Several of the contemporary loans are very large and they illustrate a variety of modes of expression: installations, photographs, three-dimensional objects, video art and digital techniques. There are some 70 important loans from foreign museums among the 150 works being shown.

Deceiving the eye – five centuries of illusions is thematically arranged and links up with psychology, philosophy, perception and optics. But, above all, it appeals – not least by its experimental presentation – to our human longing to be able, now and then, to erase the boundary between fiction and reality. The exhibition will run from 25 September 2008 until 11 January 2009.