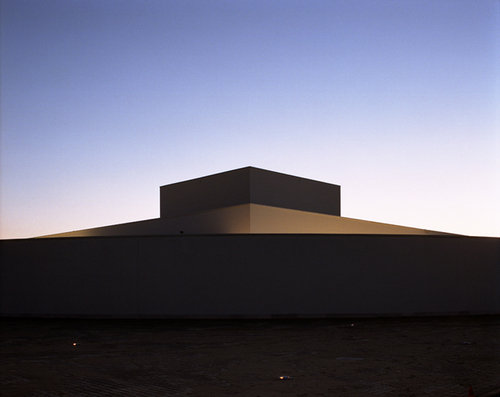 Roman Cieslewicz trained as a graphic designer and moved to France in the 1960s, though he has maintained close links with his native Poland. He applies his skills to a variety of media including posters, illustration, graphic and visual artwork for the press, advertising, publishing and exhibition catalogues.
This exhibition showcases one of the essential features of his art: his relationship with photography. He makes abundant use of photography in all its forms, boldly and skilfully manipulating images, working with graininess and combining photos with paintings.

Jacques Monory discovered photography very early on. As well as photos he takes himself, he cuts pictures out of magazines, collects stills from action films, and builds up archives of anecdotes and portraits he adapts to his own way of seeing and his own interpretation of facts and people, landscapes and even catastrophes. He is not the only photographer to use photographs as a medium for paintings, but he has such an ability to make them his own, to appropriate atmospheres and characters, that it is impossible to categorize him as a mere assembler of images. In his work photography and painting do not just meet; they demonstrate a continuity of information and thought. His unique approach makes him one of the most inventive and talented artists of his generation.

Inspired by his fascination for architecture, Marco Zanta has focused on ongoing or completed architectural projects in several European capitals. He embarked on a four-year European odyssey that took him from Helsinki to Lisbon in search of buildings destined to become modern icons able to change the face of European cities. As he takes photographs of what he sees, Zanta constructs his own project: an imaginary and poetic patchwork of cities with unique identities, a 'Euro-city' that could exist in reality despite its fragmentary and diverse form.

Organized on the occasion of the fifth anniversary of the fashion and style magazine Stiletto, the exhibition focuses on one of the magazine's key themes: beautiful interiors. Stiletto showcases objects and spaces that are sublimated, transformed and revealed by the passion and creative flair of its contributors.
Following exhibitions devoted to magazines such as Vu, Harper's Bazaar and Vogue, the Maison Européenne de la Photographie is giving carte blanche to Stiletto.

Jean-Louis Dumas' camera has been his faithful companion for forty years. He would use it on any occasion, but took care never to disturb the people around him. Though he always likes being the centre of attention, he knew how to blend into the background to get a good photo, always sensing the right moment. Sometimes he would stage his photos, placing his subjects in the frame and asking them to pose. He had a special way of getting to know people and of getting off the beaten track. Curiosity is perhaps his greatest quality, and it has been the keystone of his career, guiding him and helping him make his choices. The world around him has never stopped surprising him, and this is what gives his photographs such obvious freshness.

Some people play with fire; Dimitri Tsykalov plays with life and death. He gives life to sculptures of rifles (instruments that take life away) using dead meat. This dead meat is held by a human who appears to be meat that is still alive-but for how long? Another distinction now comes into play: the difference between freshly killed meat and meat that is not yet dead becomes tenuous. In this "meatification", that which is inanimate (the rifle) comes to life and that which is alive (the body reduced to meat) dies. By a process of contamination with which he is familiar, Dimitri Tsykalov extends this feeling of the individual-reduced-to-raw-meat to the viewer, who is irresistibly drawn into the process as he realises that he too is meat. Meat that is still alive-and thus still dying.

This exhibition presents the cyberproject "Click I Hope" shown at the Russian Pavilion at the 52nd Venice Biennale. Creating her own variation of a cybernetic behaviour game, the artist makes use of Man's natural vitality, preferring the strategy of action to that of reflection. The installation involves a screen with an on-line connection and a touch screen that makes it possible for viewers to participate. The phrase "I hope" appears on the screen in 50 languages. We can never know what motivates people to click on "I hope" in one language or another, but clicking on "I Hope" is not the same as clicking on "I Kill", which is what most electronic games would have us do. "Click I Hope" is a virtual hope accumulator.
Also presented in the exhibition are two other pieces, Univers and Mobilographie.

The 9th edition of @rt Outsiders focuses on the project I-TASC (Interpolar Transnational Art Science Constellation), produced for the International Polar Year 2007-2008. Led by Slovenian artist Marko Peljhan, I-TASC is a network of individuals and organizations collaborating in the fields of art, engineering, science and technology. The projet aims to enhance public awareness of environmental and energy issues, to set up mobile living modules and polar infrastructures with zero environmental impact, to put a data-collecting micro-satellite into polar orbit, and to act as a forum for scientists, artists and digital media technicians working in the fields of telecommunications, migration and climatology.

For several years Marie-Paule Negre has been producing candid photographic portraits of artists in their studios for the Gazette de l'Hôtel Drouot. The portraits, published regularly, are accompanied by interviews with Claudine Boni. These texts and images were presented in an exhibition and a catalogue. On the initiative of the Hôtel Drouot, it was decided to repeat the experience and present a second exhibition and catalogue. A living archive of contemporary art, this set of pictures and interviews constitutes a vibrant tribute to those who create the art of our time. Reaching beyond their works, Marie-Paule Nègre gives us the artists' faces, holding up a photographic mirror that makes the instant eterna