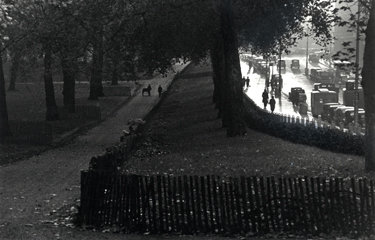 "Before Haas, there was no color photography, only colored photographs"

Haas is considered one of the most celebrated and influential photographers of the last century. The first photographer ever to be given a one man show devoted to colour photography at MOMA, he is universally regarded as the father of the medium. Edward Steichen described the exhibition as the beginning of a new "epoch in photography".

This important retrospective exhibition includes rarely seen vintage dye-transfer prints, in addition to early black and white photographs with a particular emphasis on urban photography and an extremely rare series of vintage abstract works. Unusually for a one man show, this exhibition includes both his black and white and colour work, in addition to a considerable number of previously unseen and unpublished vintage prints.

For nearly four decades the name Ernst Haas was synonymous with colour photography, but over the last twenty years, since the first time it was shown, his early black and white reportage and experimental work has become equally as well-known.

In 1949, he was the first to be recruited by Robert Capa in to the newly founded Magnum agency, at the same time turning down a position as a Life staff photographer. In both reportage and documentary work he pursued a photographic equivalent of gestural drawing and painting, by experimenting with various photographic effects, such as softness of focus, selective depth of field, and overexposure, and different subjects: objects, silhouettes and shadows, store fronts or torn posters peeling off buildings. He radically changed the context in which we see these objects, both in colour and in black and white, turning the streets in to an art gallery. He introduced hues and tones never before seen in printed colour; and thus began a life-long odyssey of exploration and experimentation in to the uses and meaning of colour and the abstract in photography.

However, despite his poet's eye it was as a photojournalist that Haas made his living travelling through the post-war and particularly the American landscape collecting images and stories. He saw himself as a troubadour, wandering the world collecting not songs but pictures to bring back to an audience then thirsty for ballads about itself, now in the form of symbolic songs in black and white. As part of this approach to documenting the state of mid-century America, Haas photographed some of the most famous faces of the century, and his memorable portrait of Einstein standing looking almost bemused behind a desk piled high with books and papers, remains one of his most enduring studies. His portraits of movie actors, musicians, artists and the great thinkers of his day are now defining character portraits of these individuals and his famous colour composition of Route 66 in Albuquerque New Mexico is equally as definitive as a depiction of the American urban landscape. In 1958, Haas was with Richard Avedon, Irving Penn, Ansel Adams, Henri Carier-Bresson and others, voted one of the world's ten greatest photographers.

"In my estimation we have experienced an epoch in photography. Here is a free spirit, untrammelled by tradition and theory, who has gone out and found beauty unparalleled in photography. Some say it is an imitation of painting. Tommyrot! Show me a painter who can bring forth the power of this boy. Let us all stand and pay him tribute."

"For me Ernst was sensitivity itself. He had an irresistible charm and wit, a knowledge of the world, its colour, its stratis ficatious since its origin, various cultures he expressed so vividly in his photographs. He disappeared swiftly like a comet leaving behind a long trail of human understanding and with such finesse. I can hear him bursting out laughing and making fun of me if he read this."

"The colour on colour photography has often seemed an irrelevant decorative screen between the viewer and the fact of the picture. Ernst Haas has resolved this conflict by making the colour sensation itself the subject matter of his world. No photographer has worked more successfully to express the sheer physical joy of seeing."

"He made us see his colour. When some photographers take pictures, it doesn't matter whether they are working in black-and-white or colour. But when Ernst shoots colour, it makes all the difference in the world."

"He's been incredibly copied since the very beginning. The trouble is the most Ernst's imitators over the years have been photographically vulgar and obvious, and in a way that's reduced his work retroactively, which is a shame. But his own eye and sense of observation are undiminished. He just does it better than all of them."

Dear Ernst Haas:
I wish I could tell you how much I appreciated your colour photographs which you projected at the Asilomar Conference. I have seen thousands of colour pictures; most I dislike for various reasons - sheer dullness to sheer decadence! The particular quality of your work was refreshment. I hope you know what I mean. The pseudo- abstract stuff which clutters so much of the contemporary art world contributes little to the spirit. Your work - although your sources were both simple natural situations and simple "junk" - possesses a direct quality of beauty which thoroughly transcends "subject." My congratulations! (...) I am very happy you exist. Photography is a better art because of you exist. Can I say more? No! Please come out here and stay awhile with us. Again, thanks.

"While I was attending a bullfight in Arles in the late 1950s, Pablo Picasso showed me an issue of Life magazine in which the famous photograph of a bullfight by Ernst Haas, at low speed and showing the movement, was reproduced. Picasso was an enthusiast and wanted me to see it because I was doing bullfights in black-and-white. The name Ernst Haas was already in my head. Then 'The Creation' was published, and I was even more enthusiastic. It was after this publication that I dedicated myself more to colour.
Ernst was a superb artist and a master of colour. With the high level of culture and the heritage of his European roots, he was able to bring an anonymous landscape to the level of masterpiece of colour and perfect composition. No one will be able to replace a man with such a vision, a deep sense of nature, the magic of the earth, and his relationship with the cosmos."

Ernst was my friend even before I met him. I had seen his colour work in Life magazine and in a show at the Museum of Modern Art. At a time when colour photography was confined to reality, Ernst was pushing at walls I didn't even know existed. He was controlling colour and breaking every rule of colour photography. Eliot Porter was also embracing the world of colour, but it was Ernst who threw the gauntlet down and challenged me. The sheer beauty of what Ernst did was in the fact that he used his sensitivity to see. If there was motion, it was motion for a reason. While Minor White would see an abstract close-up of peeling paint as a surreal landscape in black-and-white, Ernst would shoot a piece of rag on a street and it would become a three-dimensional colour vision. Ernst would never use colour just for the drama of colour. He used colour with feeling and with reason. For me, Ernst Haas will always be the father of modern colour photography."