The exhibition brings together 8 rising stars of contemporary Chinese urban art whose work reflects the recent dramatic social and economic transformation of China and deals especially with popular culture. Curated by Yan Lei. 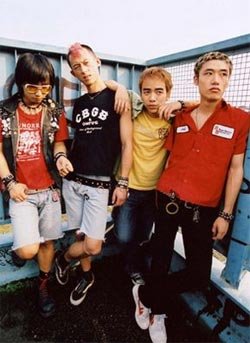 Down Town Production is a dynamic group show bringing cutting-edge, urban Chinese art to the UK. Curated by one of China's leading artists, Yan Lei, the exhibition brings together eight rising stars of contemporary Chinese art whose work reflects the recent dramatic social and economic transformation of China. It is anticipated that 70% of China's 1.3 billion population will live in urban areas by 2035. At the end of 2002, records showed that China's urban population totalled 502 million, living in over 21,000 towns and cities. Down Town Production is a selection of art that reflects and explores this dramatic shift.

The artists will give us a taste of China's emerging popular culture, with works as such as ground-breaking L.A.S.E.R. graffiti by conceptual artist, DJ and rapper, MC Yan. L.A.S.E.R. tagging is the very newest form of graffiti art developed only a year ago and currently cropping up in cities all over the world. Courtesy of MC-Yan, London will experience a major laser-tagging event this autumn, as part of the exhibition.

Down Town Production is being staged by The Red Mansion Foundation, which has been working to bring China’s contemporary art scene to the UK for almost a decade, discovering new talent and establishing an exchange program between London and China for some of the biggest names in contemporary art. Many of the works in the exhibition will be for sale.

The Down Town Production show will take place both inside and outside the Red Mansion Foundation's gallery space, which will be completely transformed for the purpose of this exhibition. Curator, Yan Lei, will distort the traditional "white cube" concept and create a totally new environment for the show that will be particularly striking in the context of the Red Mansion, a listed Robert Adam building.

The exhibition will also include a one-off special performance by Brain Failure, trailblazers in China's burgeoning punk scene, who will play at the ICA on 17th October. Formed in 1997, the band were the first to emerge from the People's Republic of China, embracing Western punk ideals and now enjoying commercial success at home and in the US. This will be their first UK performance, and offers an insight into a youth movement that is gathering force. The bill also includes Stanley Kubrick Goes Shopping, a new collaboration between Youth of Killing Joke and Dennis Morris, lead vocalist of Basement 5 and music photographer, famed for his seminal images of the Sex Pistols and Bob Marley.