From the Cellar to the Attic I From the Feet to the Brain. With new room-filling sculptural tableaus on five exhibition floors, Fabre creates a fascinating and mythical world of horror, beauty, and metamorphosis that is hardly conceivable in conventional artistic terms and constantly alternates between reality and dream. In its mode of presentation the exhibition follows the form of the human body, in which in metaphorical harmony with the different anatomical zones the five exhibition floors form a gesamtkunstwerk of tremendous and mysterious complexity. 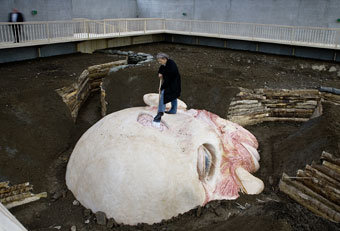 In 1978, Jan Fabre (*1958 in Antwerp/Belgium) erected a tent on his parents’ property, which was to serve as his bedroom, laboratory, studio, retreat, and private universe for a long time to come. He called this work “De neus/neuslaboratorium” (“The Nose/Nose Lab”). It was Fabre’s first sculptural work and can be considered the nucleus of his oeuvre. Three tent poles, a blanket thrown over them, a flat desk, a blue leather satchel, an assortment of bottles containing tinctures and insects, and a microscope make up the laboratory. Inside there is just enough room for one person, and despite its being so sparsely furnished, it is filled with meanings and visions. At first, everything seemed to revolve around the systematic method of investigation, killing, pinning, preserving, and categorizing insects. For, inspired by the passion with which his great-grandfather, the famous entomologist Jean-Henri Fabre, delved into and examined things, Jan Fabre seems to have also dedicated himself to the sober reality of scientific research.

The tent, initially just a scientific laboratory, now became a small studio. The territory through which Jan Fabre has moved from now on is the black area of the extinguished, an abstraction under which instinct is free to play out its obsessions. What has emerged is space for sharpened senses, which obey the voice of nature. The microscope – as a symbol of scientific precision, of a degree of concentration that aims at diving into the depths of painstaking observation – stands for the researcher-artist who hungrily seeks to explore interrelationships, and thus it also represents the visual act itself. And it has emerged early on in what would become typical of Fabre’s work: the mirroring of the meaning of seeing as something that focuses inward and outward at the same time.

The tent not only stands for a protective space but is also an archetype of risk, threat, and loss, conditions that would henceforth accompany Jan Fabre in his artist’s existence. It also embodies the artist’s loneliness. If looking outward fails to sharpen one’s perception for the things of this world – the whole truth – there is always the parallel path into the self that one can resort to, into the fathomless inner pool of dreams and visions.
In 1976, two years before erecting his tent, Jan Fabre had gone to Bruges, where he discovered the Flemish masters for himself. Fabre did not regard the paintings he saw in Bruges as a work of mere art historical interest, upon which one has only to gaze long enough in order to be able to analyze and understand all its secrets. Rather, he experienced a reversal of the usual perceptual relationship between the work and the viewer: that not only does he gaze at the work, but the work also gazes at him.

Within a world of frequencies upon frequencies of mediation, the artwork in its singularity shifts for a brief but all the more enduring moment to the center of individual observation. It is the moment Joseph Brodsky was talking about in his acceptance speech for the Nobel Prize in Literature in 1987 when he said: “A work of art leaps straight out at the viewer, addressing him tête à tête and engaging in direct contact with him without mediation.” And he goes on to say: “If art teaches us – particularly the artist – anything at all, it is the privateness of the human condition. Being the most ancient as well as the most literal form of private enterprise, it fosters in a person, knowingly or unwittingly, a sense of his uniqueness, of individuality, of separateness – thus turning him from a social being into an ‘I.’” In this respect it is understandable that gazing at the Flemish masters – with their real directness in displaying the body, suffering, and torture – Jan Fabre, in his sensitivity for these themes and forms, was so moved that he recognized himself in the paintings, and that from that point on, as he puts it, body art and performance became the main elements of his work.

His earlier happenings gave Fabre the opportunity to create a platform for simple truths. The first truth in this context was the body. This concept, traditionally most strongly connected with subjecting the physical self to danger and ultimately with death, is juxtaposed by Fabre, particularly in his theater pieces, against the idea of a body consisting of muscles, effort, and concentration and controlled by willpower. Like insects flying again and again toward a source of light until they grow weary and collapse, the dancers in his theater cover the hermetic box-like space of the stage with the regular staccato of their movements. Just as light triggers a self-destructive mechanism in the insects, so with Fabre does his fascination with death.
This established certain basic principles in Jan Fabre’s work early on. He would apply selected artistic strategies which he devised in the early part ofhis career and continued to develop in different disciplines and various media. It is a universe of plentitude based on five cornerstones: the awareness of the power of the images of the real, discovered in the Flemish Primitives, further developed through the visual force of performances and theater, and finally emerging as visually overwhelming sculptural tableaus; the extreme emphasis of the body as the interface between life and death, agony and fulfillment; the fascination for insects as a symbol of metamorphosis, as the subject of intense research, and as important material for drawings, objects, and large-scale two- and three-dimensional productions; the continuous application of the auto-mechanical principle to all artistic activities, a principle that originates from the discovery of the body and the behavior of insects; the fascination for mirroring and doubling, which is the point of departure of many works.
For the Kunsthaus Bregenz, Jan Fabre is staging his first large-scale museum exhibition in Austria. With new room-filling sculptural tableaus on five exhibition floors, Fabre creates a fascinating and mythical world of horror, beauty, and metamorphosis that is hardly conceivable in conventional artistic terms and constantly alternates between reality and dream. In its mode of presentation the exhibition follows the form of the human body, in which in metaphorical harmony with the different anatomical zones – starting with the feet on the ground floor and ending with the brain on the upper floor – the five exhibition floors form a gesamtkunstwerk of tremendous and mysterious complexity.

Jan Fabre is an artist, theatre-maker and author. He was born in Antwerp in 1958. In the late seventies he studied at the Royal Academy of Fine Art and the Municipal Institute of Decorative Arts and Crafts in Antwerp. His first works date from that period. Jan Fabre makes installations, sculptures, drawings, films and performances. Over the years he has built up a sizeable body of work and has become internationally acclaimed. Fabre has taken part in such major international exhibitions as the Venice Biennale (1984, 1990, 2003 and 2007), documenta in Kassel (1987 and 1992), the Sao Paolo Biennale (1991), the Lyon Biennale (2000), the Valencia Biennale (2001) and the Istanbul Biennale (1992 and 2001). In 2008 he will have a show at the Louvre in Paris.