The inaugural event of a long-term CCS Bard research project that includes a large-scale exhibition in the CCS Galleries and Hessel Museum of Art, as well as related screenings and discussions throughout the year. The research project investigates the heritage of documentary practices in contemporary art, in relation to the history of film, documentary photography and television as well as to video art. By merging with art traditions such as video, performance, and conceptual art, documentary forms have been reinvented and reinvigorated. Works by more than 40 artists, curated by Maria Lind. 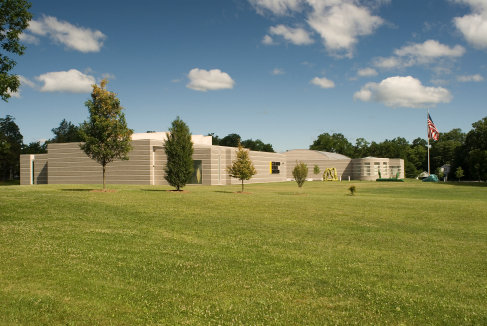 The Greenroom: Reconsidering the Documentary and Contemporary Art is the inaugural event of a long-term CCS Bard research project on "the documentary" that will include a large-scale exhibition in the CCS Galleries and Hessel Museum of Art, as well as related screenings and discussions throughout the year.

The research project will investigate the heritage of documentary practices in contemporary art, in relation to the history of film, documentary photography and television as well as to video art. The project aims to situate these contemporary documentary practices within current cultural production, and will explore their role within mainstream media. Artist and theoretician Hito Steyerl will collaborate with the Center on all aspects of the project., which will begin in March 2008 and run for approximately three years.

Documentary art works have played a defining role in art production of the late 20th and early 21st century. At the same time their status in an art context has been questioned. In the context of globalization, the representation of the real became once again an important problem in the field of art. Political and economical upheavals prompted a renewed interest for social reality and its documentary mediation. Furthermore, the failure of mainstream media to deal with current events in apropriate ways made documentary art practices take up a compensatory position. By merging with art traditions such as video-, performance- and conceptual art, documentary forms were reinvented and reinvigorated. A wide range of recent documentary works attests to a new diversity of forms, ranging from conceptual mockumentaries to reflexive photo essays, from split screen slide shows to found footage video reportage. Although innovative documentary art forms abound, little has been discussed and even less has been written about the contemporary boom of documentary forms. The Greenroom will address urgent questions about the history of documentary art forms in the context of globalising media and an expanding art world. It will investigate the relationship of fact and fiction, media and mediation, the question of archive and copyright, and the shifting role of documentary forms in the age of digital reproduction.
Programs and Events

The Greenroom: Reconsidering the Documentary and Contemporary Art is curated by Maria Lind.

Reference Group
Petra Bauer (self presentation) I work with exploring the possibilities of conceptual documentary. My works often consist of filmic reworking and investigation of other people’s stories. In my films I always relate and connect people’s individual fates with general occurrences in society. Therefore the ethical problems that arise in relation to the statements of witnesses and the documentary are always present. My interest lies in how we represent events, how personal motifs influence history and how interpretation can become fact. I am currently working with a film based on a meeting filled with conflict between representatives of various Swedish authorities and a young Lebanese girl in Malmö. With the girl’s story as starting point I examine how people from different positions in society perceive and interpret her story. What is the function of the girl’s story in Swedish society and on what grounds has it been constructed? As part of my artistic practice I have co-initiated a production unit for artists working with moving images. The production unit is a network and a critical forum for artists working with investigative journalism, media criticism and narrative experiments. We are interested in a discussion of the production- and distribution systems for images and are amongst other things arranging seminars and symposiums with invited filmmakers, artists and theorists. Presently this group consist of the artists; Petra Bauer, Kajsa Dahlberg, Johanna Gustavsson, Sara Jordenö, Conny Karlsson, Runo Lagomarsino, Tova Mozard and Ylva Westerlund. During my stay at Iaspis I worked together with the artist Kajsa Dahlberg. We are particularly interested in the relation between various structures of narrative and the creation of “documents”; how they are constructed and how it affects the way we perceive and interpret reality. With our own method and position as starting point we would like to explore the possibilities and complications of documentary narration within the art world.

Matthew Buckingham has had solo exhibitions in the past two years at various international institutions, including the Dallas Museum of Art, the Saint Louis Art Museum, Kunstverein Westfalischer, and the Kunsthalle St. Gallen. His work has been included in the Corcoran Biennial (2004), Faces in the Crowd (Castello di Rivoli and Whitechapel Art Gallery, 2004-05), Universal Experience (MCA Chicago and Hayward Gallery, 2004-05), and This storm is what we call progress (Arnolfini, 2005). A new work titled Obscure Moorings was featured in the Liverpool Biennial (2006). A text on his work appeared as the lead article in Artforum (March 2004) and monographic articles were recently published in OCTOBER (April 2007) and frieze (May 2007). Buckingham was a DAAD fellow in 2003. He is represented by Murray Guy, New York, where he currently has an exhibition showing through April 12th.

Carles Guerra is an artist and critic based in Barcelona whose work investigates dialogical aspects of visual culture. He is Professor of Contemporary Art at the University Pompeu Fabra, Barcelona; and has curated exhibitions on Art & Language in Practice (1999), After the News. Postmedia Documentary Practices (2003), Situation Cinema. Joaquín Jordá (2006), and authored an interview with Toni Negri, N for Negri (2000). He is on the editorial board of ‘Cultura/s’ (La Vanguardia) and was appointed Director of Primavera Fotogràfica de Catalunya in 2004.

Walid Raad is a media artist whose works to date include video, photography and literary essays. All, in one way or another, deal with the following concerns: the contemporary history of Lebanon with particular emphasis on the wars in Lebanon between 1975 to 1991; the representation of traumatic events of collective historical dimensions; and the ways film, video, and photography function as documents of physical and psychological violence. Raad's media works have been shown at Documenta 11 (Kassel), The Venice Biennale (Venice), The Whitney Biennial (New York), The Ayloul Festival (Beirut, Lebanon) and numerous other festivals in Europe, the Middle East, and North America. He is a member of the Arab Image Foundation and a founding member of The Atlas Group (Beirut/New York ~ www.theatlasgroup.org). Raad is represented by The Anthony Reynolds Gallery in London and by the Sfeir Semler Gallery in Hamburg, and Paula Cooper Gallery in New York.

Hito Steyerl lives and works in Berlin as documentary filmmaker and author. Apart from Philosophy she studied Cinematography and Documentary Filmmaking at the Academy of Visual Arts, Tokyo and Munich Academy of Television and Film. She has published essays concerning questions of (cultural) globalization, urbanism, racism and nationalism. Other research interests include political theory, global feminism, and migration. Her latest book is Die Farbe der Wahrheit (2006).

This exhibition has been made possible with support from the Audrey & Sydney Irmas Charitable Foundation, the Robert Mapplethorpe Foundation, and the Patrons, Supporters, and Friends of the Center for Curatorial Studies. Special Thanks to the Goethe Institut, New York.