Since the early 1990s, she has produced a complex body of photographic work, adopting such diverse genres as studio portraiture, landscape photography, and urban street photography to explore notions of communal, sexual, and cultural identity. From her early portraits of queer subcultures, pristine urban panoramas, and expansive landscapes to her incisive views of her own domestic life, Opie has offered profound insights into the conditions in which communities form and the terms by which they are defined. 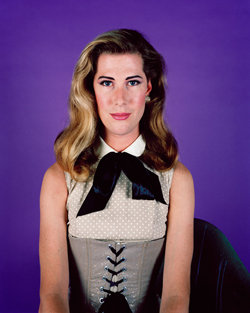 Since the early 1990s, Catherine Opie has produced a complex body of photographic work, adopting such diverse genres as studio portraiture, landscape photography, and urban street photography to explore notions of communal, sexual, and cultural identity. From her early portraits of queer subcultures, pristine urban panoramas, and expansive landscapes to her incisive views of her own domestic life, Opie has offered profound insights into the conditions in which communities form and the terms by which they are defined. All the while she has maintained a strict formal rigor, working in lush and provocative color as well as richly toned black and white. Influenced by social documentary photographers such as Walker Evans, Dorothea Lange, and August Sander, Opie underscores and elevates the poignant yet unsettling veracity of her subjects.

Opie first came to prominence with her Portraits series (1993–97), which celebrates the queer community in San Francisco and Los Angeles , including practitioners of drag, transgendered people, and performance artists. Set against brilliantly colored backgrounds, these figures confront the viewer with intense gazes, asserting their individuality and destabilizing conventional notions of gender. Opie describes these sitters, all of whom she knew personally, as her “royal family”; by adopting a style inspired by portraitists like the 16th-century German painter Hans Holbein, she offers an affirmative and even tender portrayal of a subculture often rendered invisible by dominant cultural norms.

Concurrently with the Portraits, in the mid-1990s Opie began to photograph urban landscapes throughout Los Angeles . Her first city series, Freeways (1994–95), pictures the city’s highways devoid of human presence, their sweeping slabs of concrete set against the sky. Nearly abstract and printed on an intimate scale, these photographs are nonetheless analogous to Opie’s portraits in their majesty. As documents of a primary aspect of daily travel in Los Angeles , the Freeways suggest that the strategies and structures intended to connect people can in fact divide them.

The Houses series (1995) continued Opie’s urban exploration through crisp, frontal views of Beverly Hills and Bel Air mansions that, like the Freeways, appear devoid of human presence. Yet each pristine façade retains as distinct a character as each of the friends Opie portrays—these houses structure and signify the community within which their occupants exist. Symbols of the archetypal “American Dream,” they are nonetheless armed with complex security systems, massive doors, and ornate gates, marking an entirely separate community, one closed off to the artist, the viewer, and the rest of the surrounding city. Opie’s interests in portraiture and domestic architecture continued to develop, and began to merge, in her series Domestic (1995-98). Produced during a three-month trip across the country, these large-scale, color photographs document lesbian families engaged in everyday household activities, in settings varying from city apartments to country homes. Repositioning these unconventional families within the iconography of the classic American home, Opie envisions a more inclusive, complex image of the contemporary family.

Following the Freeways, Opie has also continued to investigate the ways communities form and display themselves within urban settings, in an extended series of panoramic black-and-white photographs called American Cities (1997–present). Exploring the urban environments of Los Angeles, Minneapolis, New York, Chicago, and St. Louis , among others, Opie reveals the variety of communities that exist within each city. For example, the Mini-Malls, the group of photographs that initiated American Cities, focuses insistently on the billboards, signs, and architectural elements that identify various ethnic and cultural groups in each eponymous setting. Characteristically, all the series’ photographs are emptied of human presence. With their romantic purity, each of the American Cities becomes an iconic, ideal platform for potential community interaction.

Ever seeking to diversify her artistic work, Opie has also turned away from the city, looking toward nature and the itinerant communities that exist upon it. In Icehouses (2001), she turns to the brightly painted structures built by ice fishers on frozen lakes in Minnesota . Viewed from afar, surrounded by an infinite vista of misty snow and atmosphere, the patchy assemblage of icehouses seems diminutive and immaterial. Similarly, the subjects of Surfers (2003) are virtually engulfed in the vast and gloomy shoreline of Malibu , where they watch and wait to be swept up by oncoming waves. Picturing their changing positions over the course of fourteen photographs, Opie presents a rich visual metaphor for the shifting and contingent nature of community itself, as it exists in any environment.

More recently, Opie has returned to these themes in the series In and Around Home (2004–05), investigating her own domestic life and its relationship to its surrounding environments, both local and global. The series forsakes the rigid seriality of her previous projects, establishing a fluid narrative that alternates between shots of her daily home life, views of the surrounding neighborhood, and small groups of Polaroids shot off the television screen, which highlight perhaps the most common portal between the home and the outside world: the television news media. The careful construction of this series grants it a coherence that allows viewers to wander through its narrative and emerge with a nuanced understanding of that most integral of communities, the family.

Catherine Opie: American Photographer is accompanied by a major publication, the first to gather all of Opie’s various projects in one volume. Each of the artist’s series is reproduced in full color plates made under the artist’s supervision, including works beyond those displayed in the exhibition, in order to give the most complete overview of Opie’s work ever available. The catalogue features a lead essay by Jennifer Blessing , the Guggenheim’s Curator of Photography, which surveys Opie’s artistic career and its historical contexts, as well as a series of interviews with the artist by Russell Ferguson. In addition the museum has commissioned a brief personal reflection by internationally renowned novelist Dorothy Allison, whose work explores concerns similar to Opie’s. Finally, the catalogue includes introductory essays on each of the artist’s series by Nat Trotman, Assistant Curator at the Guggenheim, as well as a newly researched, exhaustive exhibition history and bibliography. Together, the exhibition and catalogue will prove to be the primary source for an understanding of Opie’s work, providing audiences with a valuable opportunity to examine firsthand the interconnections between the artists’ various styles and subjects.

A full roster of educational programs will be presented under the auspices of the Sackler Center for Arts Education during the run of the exhibition. For updated information contact the Box Office at 212 423 3587 or visit www.guggenheim.org/education.

On View in the Sackler Center

Catherine Opie Selects: Pictures and Words
In this digital age, photographs have become increasingly public and open to many interpretations. More than ever before, it is not only the photographer who defines an image’s meaning, but also the audience. Catherine Opie Selects: Pictures and Words offers an opportunity for visitors to participate in this circuit of interpretation and contribute stories of their own. For this exhibition, Opie has selected images from the Guggenheim Museum ’s photography collection and organized them into three sections drawn from themes in her own work: Self-Portraits, Landscapes, and Portraits. Coupled with these images are questions meant to prompt written responses in the form of essays, poems, stories, or personal reflections. Displayed together in the Sackler Center gallery, these contributions constitute a community of voices, expanding the meaning of each picture and possibly altering the ways we understand photography itself. The exhibition is on view through January 7, 2009.

This exhibition is supported by The Robert Mapplethorpe Foundation, Inc.

Identity and its Aftermaths
Thursday, October 2, 6:30 pm
Moderator: Liz Kotz, Assistant Professor, University of California , Riverside
Participants: Coco Fusco, Jennifer Gonzalez and Simon Leung.
After a period recognized as Reagan’s , marked by the art of appropriation, more avowedly political and openly dissenting currents emerged by the late 1980’s. On the occasion of the Catherine Opie survey, this panel reconsiders that moment of activism and “identity politics” and its implications on art making now.

Opie & Performance: The Theater of the Portrait
Thursday, October 16, 6:30 pm
Peggy Phelan, The Ann O’Day Maples Chair in the Arts and Professor of Drama and English, Stanford University
Opie’s collaboration with the performance artist Ron Athey marks an important intervention in both photographic portraiture and live art. Analyzing the challenges and the achievements of the collaboration, this talk explores the complicated visual, sexual, and aesthetic politics that make this work so dramatically compelling.

Conversations with Contemporary Photographers
Monday, December 9, 6:30 pm
Participants: Gregory Crewdson and Catherine Opie
Moderator: Jennifer Blessing, Curator of Photography
While one references staged photography and the other documentary, Gregory Crewdson and Catherine Opie similarly address the construction of pictorial narrative and the social dynamics of American suburbs. The artists reflect on the medium’s complex relationship to truth, their individual contexts within its history, and the many possibilities for its future.

Rebecca Solnit
The Blue of Distance
Tuesday, October 7, 6:30 pm
Limited seating
Set amidst the photographic landscapes of Catherine Opie’s series Icehouses and Surfers, this reading by award winning author Rebecca Solnit draws from a body of work that interweaves personal encounters with nature, exploration of new territory, and the impact of photography on our experience of time and place. Solnit’s work includes River of Shadows (2004) and A Field Guide to Getting Lost (2005).

A. M. Homes
In and Around Home
Wednesday, November 5, 6:30 pm
Limited seating
The critically acclaimed novelist and critic A. M. Homes reads a selection of her work amidst Catherine Opie’s series In and Around Home. Homes, like Opie, documents a contemporary of changing families, suburban culture, and shifting identities. Her most recent books include the memoir The Mistress’s Daughter (2007) and the novel This Book Will Save Your Life (2006).