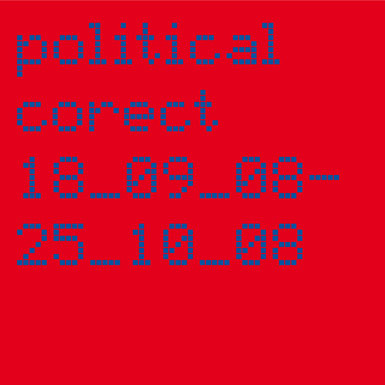 The art of politically correct or politically correct in art?
The starting point of this exhibition is a painting by Martin Kippenberger executed in 1994, on which appears in bright red the slogan "Political Corect". The euphemistic idea that implies this expression – which acquired its well-known acceptation in the USA in the eighties – gives the work the status of comment-painting…. While not defining itself as committed, it initiated a discussion on censorship and violation of freedom of expression, questioning the form that may – or may not - take the political correctness in art.

A text by Hudson, from Feature Inc., New York introduces the exhibition. You will find hereafter two excerpts from this text, which one you can read entirely on our website:

"[…] the unknown is a wonderfully scary thing. tho rarely do they buy these things, not that there are so many of them. the children couldnt live with it, guests would be offended, when really its their unwillingness to be at home with living ideas and personal discussions in their mist. live verb process. why fear an idea? why fear? aids is everywhere and inextricably mixed with love. The flip flop of that painting brings a smile to my face. formally its a beautiful thing. for me, the contextualized reference somehow makes the horrific aspect of the situation more manageable. it just is. you live with it. most everyone knows someone who is poz and happy. most everyone knows someone who is rich and miserable […]"

"[…] politically correct lives next door to esthetically correct and theyre both just down the street from fashionably correct. ones an emanation of the other. they focus fear and are about control. obnoxious is their name. they commercialize under the tyranny of class, which these days tops race and gender, the haves and have nots, the right and the left out. The insidiousness of advertising is perpetuated here. connoisseurs flock the pc country club, as kippenburger dished, preaching pc thru condescending affectation. nothing is wrecktified. issues are usurped by their slathering of self serving congratulations. words only. nothing is xperienced. zpg. is like those scads of late 60s hippies from antiwar marches who five years later were all corped out in suits chocked full of amenities and protected their investments with decades of republican usa prezes. since then, i never trust a crowd. wanabe dogooders. packs of art world colonialists ferociously infatuated with a new that obfuscates the real damage of their seasonal ravagings of insipid ideas of contemporary ethnicities, china the most recent, for investment artifacts which mimic central markets fob expectations of far enuf away close enuf to. issues of 80s appropriation seem again to be lurking […]"

PRIVATE VIEW during the Nuit des Bains: Thursday 18 September from 18.00