Out of the ordinary. 1970-1980. A pioneer of street photography approaches the urban setting as a scenery in the making. His anthropocentric lens captures the city crowd in all its aspects: random events, snapshots of leisure places such as parks and beaches, but also peaceful empty landscapes are some of the images which constitute Meyerowitz's lonely journey into the unpredictable mythic American cityscape. 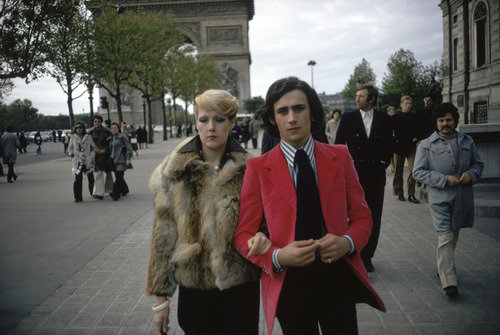 To read a Meyerowitz image is to see the elements in his photographs come together to form multiple narratives, delightful little stories within the greater context of the larger world.
Photo District News magazine

A pioneer of street photography, Joel Meyerowitz (born in 1938, New York) approaches the urban setting as a scenery in the making. From 1960’s onwards, his anthropocentric lens captures, stoically or spontaneously, the city crowd in all its aspects: random events, snapshots of leisure places such as parks and beaches, but also peaceful empty landscapes are some of the images which constitute Meyerowitz’s lonely journey into the unpredictable mythic American cityscape.

Joel Meyerowitz’s work marks a significant course in American photography. A pioneer of street photography and one of the first to establish color photography as an art form, he approaches the -largely urban- landscape as an ever-evolving scenery. In the footsteps of Robert Frank, Garry Winograd and Henri-Cartier Bresson, his practice is based on the concept that photography is here to render an ambiguous ending to what surrounds us, by capturing moments which remain suspended in time. Simultaneously, everything looks like he is adhering to Winograd’s famous creed: «I photograph to find out what something will look like photographed».

The traveling retrospective exhibition Out of the Ordinary, which was first presented at Jeu de Paume, Paris, in 2006, includes 150 colored pictures covering the period from 1970 to 1980. The starting point of the exhibition could be a three month journey Meyerowitz made in different cities, in 1970, in order to study how Americans spend their leisure time. The photographs of his wanderings, taken in a small 35mm camera and often from the inside of a car, convey a sense of detachment and voyeuristic curiosity. Hereupon, Meyerowitz roams the streets of New York depicting with perceptiveness and spontaneity the big city crowd in all its aspects, in a series of photographs which remind us of stills from a John Cassavetes’ movie.

From 1976 onwards, the use of large format camera will bring distinct changes in his choice of topics, while his focus shifts towards the role of light and architecture, on portraits and the spatial analogies of the landscape, with the sea side resort of Cape Cod being the most characteristic of his images. For Meyerowitz, however, these seemingly different approaches are the two sides of the same coin, indicating his deep faith in photography: «I like to be able to feel my kind of jazz sensibility on the streets with a small camera and a much more classical, slower, meditative way of working with the view camera. And I think the difference between these two things keeps me alive to the possibilities of photography».