Andy Warhol: Other Voices, Other Rooms. Visitors will be immersed in his way of thinking and working through the exciting multi-media installation which will transform the gallery. Paintings and prints of famous icons including Marilyn Monroe and Campbell's soup tins, will be shown alongside video, TV programmes, films, Polaroid photos, delicate drawings, album covers and wallpaper patterns. Robin Rhode: Who Saw Who is an overview of his work drawn from the last ten years as well as showing new pieces. The installation brings together photographs, animations and film projects, sculptures and wall drawings. Rhode has also created new commissions for the show in the form of outdoor site-specific works. 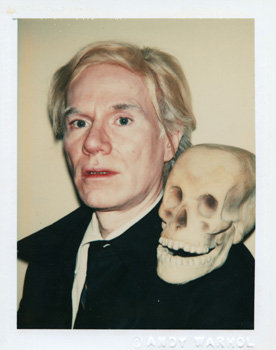 "Before I was shot I always suspected I was watching TV instead of living life. Right when I was being shot, and ever since, I knew that I was watching television.' Andy Warhol, 1968

No artist living in the second half of the 20th century has made a deeper impression on popular culture than Andy Warhol (1928-1987). 40 years on from Warhol's first major exhibition in Europe, and his infamous shooting by Valerie Solanas, The Hayward presents a major exhibition that brings a fresh perspective to his work Andy Warhol: Other Voices, Other Rooms, 7 October 2008 – 18 January 2009.

Visitors will be immersed in Warhol's way of thinking and working through the exciting multi-media installation which will transform the gallery. Paintings and prints of famous icons including Marilyn Monroe and Campbell's soup tins, will be shown alongside video, TV programmes, films, Polaroid photos, delicate drawings, album covers and wallpaper patterns. This vivid presentation reflects Warhol's egalitarian maxim, 'all is pretty'; with all media presented on the same level.

Andy Warhol was fascinated with film and television and the exhibition explores the relationship between the moving image and the still image in his work. It brings together films, screen tests, videos, and TV programmes, which combined with extraordinary archive material, seminal paintings and installations, illuminates his creative process, sheds new light on his work and explores his genius for discerning the way pop culture penetrates our lives.

Highlights of the exhibition include:
• Iconic 'Pop Art' works including screen prints of Marilyn Monroe, Campbell Soup Tins, Flowers and Electric Chairs
• 19 of Warhol's films, including Sleep (1963), Empire (1964), Poor Little Rich Girl (1965), and Chelsea Girls (1966) presented together simultaneously in a unique installation. A further eight films will be shown in a separate screening room.
• Screen tests of artists, writers and musicians such as Allen Ginsberg, Marcel Duchamp, John Cale and Salvador Dali
• Factory Diaries – video diaries showing the inner workings of the Factory – capturing regulars and celebrities such as David Bowie and Liza Minnelli, as well as Warhol's creative process
• All 42 episodes from his 1980s cable TV serials, 'Fashion'; 'Andy Warhol's TV'; and 'Andy Warhol's Fifteen Minutes'; in which he appeared with friends such as Debbie Harry and Jerry Hall. These have never been shown together before and will be screened synchronously in a unique installation.
• The entire contents of Time Capsule 92 featuring a treasure-trove of ephemera collected by Warhol, including letters, invitations, receipts, newspaper cuttings and photographs of The Beatles, Dennis Hopper and Jackie Kennedy
• A room filled with Warhol's helium inflated pillow-shaped 'Silver Clouds'

Almost two decades on from The Hayward's acclaimed exhibition Andy Warhol: A Retrospective (1989), the gallery presents a new take on Warhol's work. Using the moving image as its starting point to explore Warhol's core concerns – voyeurism, celebrity, the mundane, and the blurring of distinctions between high and low culture, the exhibition illustrates his prophetic insight into today's media-obsessed society.

Curated by independent curator, Eva Meyer-Hermann, and housed in an extraordinary setting by the Berlin designers, chezweitz & roseapple, the exhibition is organised by the Stedelijk Museum, Amsterdam, Moderna Museet, Stockholm, and The Andy Warhol Museum, one of the four Carnegie Museums of Pittsburgh. Stephanie Rosenthal, Chief Curator at The Hayward, has collaborated on this presentation of the exhibition. The exhibition began its tour at the Stedelijk Museum last October where it attracted record visitors and was then shown at the Moderna Museet in Stockholm, where Warhol held his first European exhibition in 1968.

Ralph Rugoff, Director of The Hayward, says
"We are delighted to be hosting an exhibition that radically redefines the nature of Andy Warhol's importance. Andy was such a multi-faceted artist that every era can rediscover its own Warhol, and this exhibition offers an innovative and insightful exploration not just of his extraordinary artistic achievement, but also of his pioneering way of looking at both art and the world."

Eva Meyer-Hermann, Curator, says
"Andy Warhol once wondered about how it would be if one mirror would reflect another. He declared that everything which we want to know can be seen on the surfaces of him and his works. I thought I had to look behind these surfaces, but realised that what we are looking for is not behind but in front of them. Warhol's surfaces reflect the world; his works are about you and me."


This exhibition is organized by Stedelijk Museum Amsterdam and Moderna Museet Stockholm in collaboration with The Andy Warhol Museum, one of the four Carnegie Museums of Pittsburgh.
Curator: Eva Meyer-Hermann
Scenography: chezweitz & roseapple, Berlin
With support from Beam Systems
Media partner Time Out

Also on show at The Hayward this autumn will be the first UK exhibition of the South African artist, Robin Rhode (7 October – 7 December 2008).

There will be a number of talks and special events to coincide with the exhibition including:

John Cale
Life along the Borderline: A Tribute to Nico
Plus special guests
Saturday 11 October 2008, Royal Festival Hall, 7.30pm,
John Cale, composer, co-founder of the Velvet Underground and producer of Nico's most renowned albums presents an iconoclastic tribute to his beloved icon. A very special line-up of artists re-imagine her life, work and songs in this one-off event.

This autumn, The Hayward presents the first UK exhibition by South African artist Robin Rhode. A recognised talent on the international art scene, Rhode has a growing reputation for brilliantly inventive performances, photographs and drawings. Robin Rhode: Who Saw Who, 7 October – 7 December 2008 is curated by Stephanie Rosenthal, the Chief Curator, The Hayward.

Raised in Johannesburg, Rhode's art personifies a playful style which is influenced by his South African upbringing, spending time on the streets and being forced to make your own fun. Using simple materials such as chalk, spray paint and charcoal, Rhode turns the pavements, streets and walls of the city into his paper, canvas and backdrop, creating his own reality in the heart of urban society. These two dimensional drawings are then brought to life by performance and captured on film or photograph, as the artist or a doppelganger tries to blow out a chalk candle, juggle with charcoal balls or ride a chalk bicycle.

The Hayward exhibition will give an overview of Rhodes's work drawn from the last ten years as well as showing new pieces. The installation brings together photographs, animations and film projects, sculptures and wall drawings. Rhode will also create new commissions for the show in the form of outdoor site-specific works on and around Southbank Centre, turning the whole site into his working 'studio'. These works will be documented and incorporated into the exhibition. With Rhode's work, racial, social, class and geopolitical elements take a central role in the critical reworking of the nature and value of materials and in the action of making art.

Ralph Rugoff, Director of The Hayward, said;
"Robin's work presents life as a game, with fantastical scenarios that ask the viewer to trust in their own imaginations to bridge the gaps. But these seemingly light hearted works often disguise a darker subtext, including issues of urban poverty, freedom and personal space and the commodification of youth cultures. Robin produces engaging, thought provoking work and The Hayward is delighted to introduce its visitors to a major artist of the future."

The exhibition will include works from his photographic series, such asCatch Air (2003), where a skateboarder deftly negotiates a chalk drainpipe ramp, gathering speed from side to side as he finally makes the 'jump'. In a later work, Untitled (Hard Rain) (2005), the subject uses an umbrella to protect himself from a painted heavy downpour which remains after he leaves the scene. It is in these works that Rhode first demonstrated a more expressive painterly quality that went on to inform his more recent works, including abstract paintings and drawings showing at The Hayward. Of the films being shown, Candle (2007), a 16mm film projection, shows the viewers a scene that flickers from dark to light as a man works to extinguish a candle.

Soap and Water (2007) is a sculpture of a bike cast from soap and subsequently left to dissolve as it battles the English weather on The Hayward's sculpture courts. Sculpture is a recent departure in practice for Rhode, which like the transient nature of his street drawings and performances use materials that are impermanent, such as soap, charcoal and chalk.

Rhode's work mixes a fine art sensibility, following in the footsteps of artists such as Marcel Duchamp and Jean-Michel Basquiat, with a keen understanding of popular contemporary culture, with influences including music videos, street art and contemporary clothing brands.