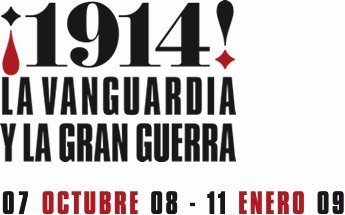 Few historical events were of such crucial importance as the 1914 war to the development of the early avant-garde art movements. The years immediately prior to the outbreak of the conflict coincided with a period of outstanding creative vitality for these art movements in which the desire to rise up and overthrow what had gone before anticipated the militant aggression expressed by most of the protagonists of the new art. In addition, the experience of the war had a powerful influence on the work of artists, not only because it became a subject within their output, but particularly because it involved an undeniable reality that highlighted the internal contradictions within the discourse of modernity of which their works formed a part. The exhibition looks at the development of the new international art in the time period from approximately 1913 to 1919 and offers an interpretation conditioned by the idea of war as the backdrop to culture. It deals among other matters with the prophetic role adopted by avant-garde art in relation to the events that would determine its own crisis, the capacity of the new artistic idioms to transform their representations into the visual currency of the militant spirit, the various forms of a type of apocalyptic mode of expression that arose and died out during this period, and the opposing position assumed by various artists in the face of the madness of the combat.