A retrospective exhibition of works by one of the most important kinetic artist of the 20th century. The artist adopted Kinetic art as his means of expression, a movement that depends on motion for its effects - allowing the viewer to participate, or 'move through' the piece. 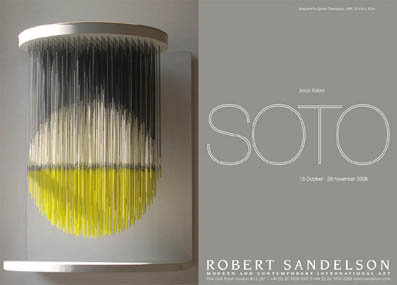 Robert Sandelson is pleased to announce a retrospective exhibition of works by Jesús Rafael Soto (1923-2005), one of the most important kinetic artist of the 20th century. The show will be held in our Cork Street gallery from 13 October to 23 November and is the first significant exhibition of Soto’s work in London for forty years.

Alongside the exhibition there will be an editioned work entitled Sphere Theospacio released by the estate.

Jesús Rafael Soto (born 1923 in Venezuela - died 2005 in Paris) adopted Kinetic art as his means of expression, a movement that depends on motion for its effects - allowing the viewer to participate, or ‘move through’ the piece. His works were meant to display not only the implied movement of Op art, but also the actual movement Kinetic art provides. This was especially notable in his Penetrables Series of the 1960s, where spectators were invited to walk through hanging nylon filament - described as a sensorial experience. Sphere Theospacio presents a unique opportunity to acquire a work related to this important body of sculptures.

Soto studied at the Academy of Fine Arts in Venezuela with fellow students and artists Carlos Cruz-Diez and Alejandro Otero. Early influences were cubism, Cezanne and Mondrian. It wasn’t until he moved to Paris in 1950 and joined the circle of abstract artists associated with the Salon des Realites Nouvelles - Victor Vasarely for one, that he found his true calling in geometric art. Soto developed a Kinetic vocabulary with origins in serializations that produced optical vibrations, these in turn, modified both space and the viewer’s perception. In the mid 50s he embarked on a series of reductive paintings and installations with optical effects, experimenting with chromatic planes and the transformable qualities of color, exploring the relationship between parallel lines and background/ foreground, for which he would become internationally known. He is best known for his use of modern materials such as nylon filament thread, metal rods, steel, aluminum, perspex and industrial grade paint.

He received many exalted commissions for public works, including murals for Unesco, Paris, Bank of Toronto and at the forum of the Centre Pompidou. In 1997 Soto was awarded the National French Prize for Sculpture.

Soto had numerous solo shows around the world, most notably a major retrospective at the Guggenheim Museum, New York in 1974; the Galerie Nationale du Jeu de Paume, Paris in 1997; and most recently at the Museum of Latin American Art, California, 2005.

In recent years we have experienced a renewed interest in optical art evidenced in exhibitions such as ‘The Kinetic Eye’ exhibition in Strasbourg, France and ‘The Expanded Eye’ at the Kunsthaus Zurich, Switzerland. Op artists, such as Soto and Vasarely, have been brought back to the forefront of today’s emerging art scene. The exhibition at Robert Sandelson helps to underscore the significance of Jesús Rafael Soto and his influence on the art of both the past and present.