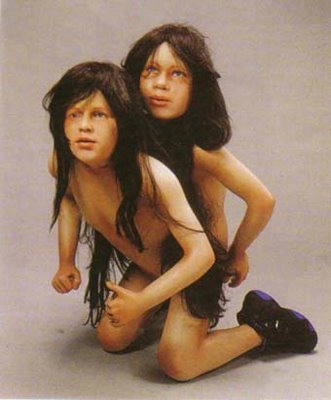 Allsopp Contemporary and Wedel Fine Art announce a collaborative group show that deals with fear. Through the works of thirteen established and emerging artists from India, China, France, the UK and the USA, the exhibition examines differing interpretations of fear, and its relationship to current global concerns.

Fear of terrorism stalks the 21st century. Sun Yuan and Peng Yu’s I am Here shows an Afghani rifleman peering through a bullet hole in the wall. Whether the perpetrator or the victim of some act of violence, the gaze instills fear both of the man and the circumstance in which he finds himself. Yin Xinzhen’s vast patchwork of clothes and fabricated ‘forbidden’ objects in Dangerous Things In Baggage, addresses the repercussions of fear in our everyday lives and how restrictions are forced upon us. Equally, Shilpa Gupta tackles the culture of fear that is ever-present on city streets the world over. In a series of prints she documents the carriage of a suitcase marked with the words “THIS IS NOT AN EXPLOSIVE” through the streets of London, invoking terror among passers-by.

Jake and Dinos Chapman’s, All Good Things Come To An End, gets down to more gruesome details. Inviting the viewer to observe a nightmarish scene of bloody war, the work suggests death, fear and destruction as pre-requisites for the understanding of human existence. Similarly, Alexander Hoda’s, War Memorial, displays a pile of writhing, drowning animals, clambering one on top of another. In both works, outlandish scenes of devastation are graphically depicted so that fear can be realised and thus rationalized.

Shi Jinsong’s, Na Zha Baby Boutique, is a black steel baby pram that looks more like a weapon than a pushchair, subverting the notion of infancy as simple and comfortable. Also discomforting is Nicolas Pol’s, Collateral Child Body Bag. Emblazoned with the same crest that is found on US army coffins, the bag conjures thoughts of how dead children are returned from war zones. Though empty, it represents unrealized fear.

While these works relate to real life events, the three word pieces by Martin Creed, Jack Pierson and Christopher Wool that respectively read, Don’t Worry, Torment and Fear, describe familiar human responses. They punctuate the exhibition by re-mystifying fear and anxiety as abstract human emotions, devoid of cause or effect. The exhibition seeks to examine fear in contemporary society, not simply as a collective condition, but as a personal, often irrational, instinct that is fundamental to who we are and how we interact with the world around us.