The title of the exhibition comes from a famous video directed in 1982 by the American conceptual artist, Dan Graham, in which he offered a provocative hypothesis on the relationship between religion and rock in contemporary culture, which doubtlessly also extends to the visual arts. From pop to conceptual art, from performance to video, from situationism to art practices in the new millennium, artists such as Andy Warhol, Robert Rauschenberg, Vito Acconci, Tony Oursler and many others continue to tackle the musical genre in much of their most important work, sometimes going so far as to actually form rock groups and produce records. The show brings together over 60 artists both national and international, working in all kinds of materials. 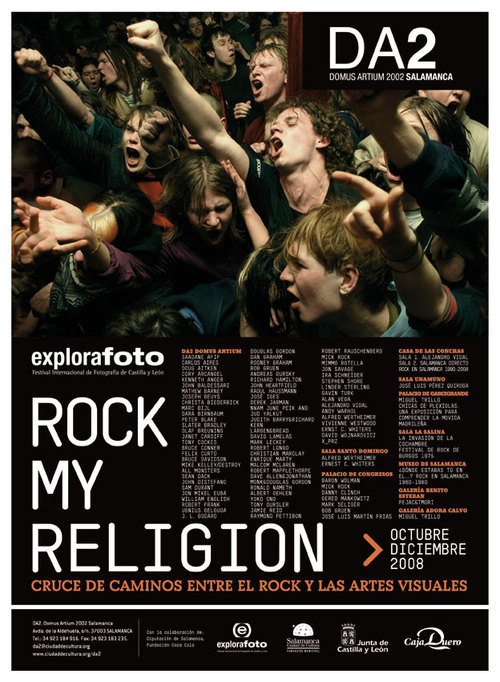 In March 1956, at only 21 years old, a young man from Tudelo (Mississippi) called Elvis Presley brought out his first LP under the RCA label. With a short space of time, the record reached the top of the international charts and a new style of music called Rock and Roll was born. Just a few months later, on the other side of the Atlantic, an English artist, Richard Hamilton, produced a small painting with almost exactly the same dimensions as Elvis’ record cover. The piece was called “Just what is making today’s home so different, so appealing?” and after showing at the exhibition “This is tomorrow”, it formed the founding stone to a new movement: Pop Art.

Since then, the visual arts and rock have travelled along parallel paths, experiencing a series of relationships and exchanges that have effectively renovated the world of the image. It was no coincidence that Richard Hamilton frequented the musical haunts of Swinging London and a few years later, collaborated with The Beatles and The Rolling Stones. Similarly, Elvis Presley became one of the favourite subjects of American pop artists like Andy Warhol and Ray Johnson.

Since the sixties, various generations of artists have been educated under the influence of what was initially dubbed “the music of the devil”. Consequently, there are various movements and cultural styles that have been fascinated by rock’s subversive potential and have integrated elements into their work that relate directly or indirectly to the fashions and iconography of rock.

From pop to conceptual art, from performance to video, from situationism to art practices in the new millennium, artists such as Andy Warhol, Robert Rauschenberg, Vito Acconci, Rodney Graham, Mike Kelley, Tony Oursler, Raymond Pettibon or Christian Marclay and many others continue to tackle the musical genre in much of their most important work, sometimes going so far as to actually form rock groups and produce records. At the same time, it should be remembered that quite a number of internationally renowned rock musicians, such as John Lennon, David Bowie, Pete Townshend, Syd Barret, Brian Eno, David Byrne, Laurie Anderson or more recently, members of bands like Sonic Youth, Blur, Franz Ferdinand or Babyshambles, trained at art college before becoming professional musicians...

As a hybrid genre par excellence, long before art, rock gained a reputation as the first post-modern cultural movement to blow away the divisions between high and low culture, between art and showmanship, between the stage and everyday life. And it is surely because of this that rock has also been the first counter-culture movement in history. From the outset, however, it could also always be easily assimilated and integrated within the economic system, spawning one of the most prosperous industries in the capitalism of culture.

In fact, since its birth back in the 1950’s rock has revolved around a world full of paradoxes – in much the same way as avant-garde art. On the one hand, it is reborn every few years with a transgressor and subversive will that has brought about changes in the customs and habits of the cultural consumer at various times throughout the 20th century. Remember the impact that Elvis’ suggestive movements had on the North American youth watching him on television in the mid-fifties, or the promise of a new utopia in the sixties, or the post-situationist aggression of the punk revolution in London in 1977, or the link that was made between the call for civil rights by the Afro-American community and styles like soul in the sixties and seventies and hip hop in the eighties. These are just some of the more memorable movements. And yet, on the other hand, the music industry, like the art world, has always had the ability to devour, and thereby deactivate, its more uncomfortable musical movements.

The Rock my Religion project which forms part of the International Festival of Photography of Castilla y León, EXPLORAFOTO, does not directly refer to these inherent contradictions in the genre but rather immerses itself in them through the media that have best reflected visually the grandeur and misery of rock: photography and the moving image.

The title of the exhibition, Rock my Religion comes from a famous video directed in 1982 by the American conceptual artist, Dan Graham, in which he offered a provocative hypothesis on the relationship between religion and rock in contemporary culture, which doubtlessly also extends to the visual arts. The other point of reference, essential in defining this project, is the book by American author Greil Marcus, “Lipstick Traces” (1989) which traces genealogical cultural movements in which many meeting points appear between music and art, in particular those moments – generally very short-lived – when both visual artists and rock musicians moved within a space that was both utopian and politically subversive.

Using these and other references, the Rock my Religion project also proposes a genealogy of musical and visual work which, as in Marcus’ book, had their roots buried in Dada and Situationism and reached their boiling point, through Punk. It can be seen in the work of artists who consider their art or music to be a kind of resistance that is so intense and ephemeral that it is like “a lipstick stain that can be wiped away but which leaves a profound mark on our memories…”

Rock my Religion brings together over sixty artists both national and international, working in all kinds of materials. The works will be shown in ten spaces throughout Salamanca, both as individual and collective exhibitions.