The ate rT oday. A series of works of large format mounted as an installation within the gallery space. The large images, irradiating opulence despite their emphasized simplicity, show cut-out paper drops or tears, as well as circular and sickle forms, which seem borrowed from mask-like Kabuki faces covered in make-up when pasted as abstract elements onto the white-primed canvases. 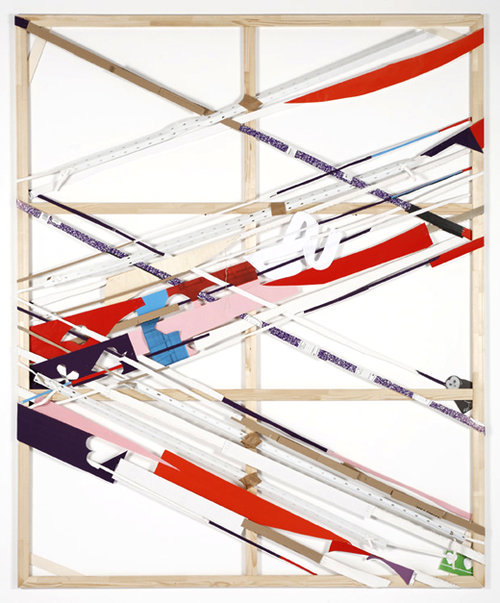 With a first solo exhibition, we are pleased to introduce the artist Henning Bohl into our gallery program. Bohl will be showing a series of works of large format mounted as an installation within the gallery space. Attached to the cornice above the walls, the canvases seem like free- hanging curtains or tapestries, which intermittently reveal the letters THE ATE R HE UTE in between. A parallel copy of the cornice reads the corresponding fragments of the letters PSYCH OLOG Y T ODAY. The large images, irradiating opulence despite their emphasized simplicity, show cut-out paper drops or tears, as well as circular and sickle forms, which seem borrowed from mask-like Kabuki faces covered in make-up when pasted as abstract elements onto the white-primed canvases. Large surfaces of colored paper cover these form arrays, sticking out from the edges like stubborn packing paper or rolling up at the edges, thus creating a second image plane. As if looking through a curtain, another space is opened in which the “image within the image” can be seen. The image becomes a stage.

Despite the strict canon of forms and the constriction to found material (like the limited color palette of decoration paper), the works give way to a great variety of associations and histories. Furthermore, the gallery as an exhibition space serves in this context “as a multilayered storytelling device” (Manfred Hermes). Michaela Eichwald describes Bohl's way of working as “ein mehrschichtiges Sampler- und Composertum” (“a multilayered way of sampling and composing”). In a kind of “Workshop-weaving mill, Bohl weaves, entangles and bolts together intrinsic and extrinsic into new.” For the artist, basically everything is potential material, including his own work. Hence, motifs from earlier works might appear recycled in the new ones. By utilizing already used fragments and the negative residues of cut-out paper forms, Bohl develops an economics of image production, implying a logic of its own in its process.

Henning Bohl (*1975, Oldenburg, Germany) lives and works in Berlin. He studied at the Städelschule with Thomas Bayerle and Michael Krebber. Works from the artist have been shown in individual exhibitions at the Studio Galerie in the Kunstverein Braunschweig and the “Kunstverein der Rheinlande und Westfalen” in Düsseldorf, as well as in various gallery exhibitions, the latest of which was “History of Garden Theory” at Casey Kaplan in New York. The 14th of November 2008 the artist will be opening a solo exhibition in the Oldenburger Kunstverein. 2009, the works of Henning Bohl will be presented in the collection of the “Verein der Freunde der Nationalgalerie” at Hamburger Bahnhof, Berlin.