Erjautz treat the experiences of the individual within such constantly interweaving and mutually irritating fields as inside and outside, private and public, and they undertake compensatory attempts to establish a positioning of the individual person in these fields and thereby resist a patent overtaxing. The group exhibition, conceived by Anna Meyer, uses the example of painting to discuss processes of visualization in between reality and abstraction in a society marked by media. Rather than seeking to assume one of these extreme stances or delimit a space, the artistic practices involved attempt to semantically imbue the path of visualization. 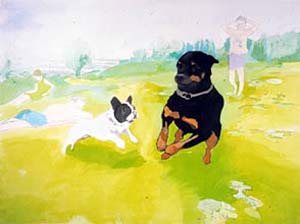 (Main Room) The works by Manfred Erjautz treat the experiences of the individual within such constantly interweaving and mutually irritating fields as inside and outside, private and public, and they undertake compensatory attempts to establish a positioning of the individual person in these fields and thereby resist a patent overtaxing.

In a continuation of earlier works, which indicated the possible emptiness of aesthetic codes with accumulatively used logos, Manfred Erjautz has developed his own logo for the exhibition at the Secession. A neon lamp in the shape of his initials ME hangs at the foot of a streetlight, which perforates the roof construction of the Secession. As a result of the paradoxical illumination situation, an allegorical WE appears on the floor as a faint shadow of the ME. The ego produces a community itself, which it immediately outshines. What dimension does the personality have in relation to the public, and how is the public constructed, if every discretion revolving around the person vanishes? How can one position oneself and move in a world of illusory relationships and circumstances?

The intervention that Erjautz undertakes in the exhibition space is to be seen in the sense of these questions. Replacing the door in the back wall of the main room with a plate of glass opens up and expands the space. A marble snowman placed in the space outside is revealed to the gaze. The suggestion of nearness, the apparent possibility of entering the garden and the simultaneously unbridgeable distance that is created through this architectonic intervention find a counterpart in the outside sculpture "Gefangen in der Gegenwart" ["Trapped in the Present"].

The view that cuts through the main room is contrapuntally continued with large format photographs showing, among other things, window and door situations. In their sculptural, architectonic formation, they construct a complex spatiality, which dissolves the fixed viewpoint of the central perspective. The passages atmospherically flooded with light are the result of a long process of image development, in which Manfred Erjautz first notes his motifs in drawings before seeking a correspondence in reality and then capturing it photographically. Diffusely modulated and blurred, the pictures demonstrate the extent to which the world outside reflects one's own imagination and can no longer be brought into focus by the knowing gaze from mental space.

Rebellion against an outside that cannot be grasped and rage expressed in violence as a reaction to the violated shelter zone of the private sphere are the theme of the slide series "Gunshot". With no recognizable adversary, the artists shoots wildly in his studio with a gun made of Lego, until he finally sinks to the floor, hit by return fire from an unidentifiable source. Although no counterpart can be unmasked, the result is exhaustion, an effort drained of power, the bullet lodged in nothingness.

There will be a bilingual publication on the exhibition in German and English.

The group exhibition Here is There 2, conceived by Anna Meyer, uses the example of painting to discuss processes of visualization in between reality and abstraction in a society marked by media. Rather than seeking to assume one of these extreme stances or delimit a space, the artistic practices involved attempt to semantically imbue the path of visualization. This path between places - between here and there, between the viewers, social structures and the picture, between reality and abstraction - often remains one that is merely sketched. The works thus underscore the impossibility of occupying a place, while simultaneously emphasizing the intention of understanding picture production as not being a replica of a reality. The term place is to be read in a multifaceted way, whether it is spatially, philosophically, poetically, abstractly, politically or methodically.

Here is There 2 debates this theme in the medium of painting, yet without formulating the methodology of painting in a way that is immanent to the medium. Across a broad range of production techniques, the selected works play through forms and rules of visualization processes as the basis for an exploration of the conditions of visibilities. In this context, painting signifies and enables introducing a distance and disrupting the visual program of commonplace, predominating information and its politics. In this way, the exhibition shifts the determination of places to an occupation of places, in which the coordinates of social spaces are negotiated and their media and social constructedness becomes a question.

The Mexico-based artist Melanie Smith, for example, investigates how aesthetics influences social behavior, while Andreas Siekmann placed urban development in a scenario in his computer drawings, which is characterized by stock exchange speculation and a changing public sphere. In her wall pieces perforated by photo collages, Amelie von Wulffen treats the inscriptions of social knowledge in architectures in relation to biographical views. Ellen Harvey's painterly interventions in the exterior space link romantic landscape painting with a tradition of graffiti. Katrin Plavcak draws disturbances in the encroaching indolence in everyday life into the picture itself, whether it is in the form of irony or humor, but also in irritating perspectives that evoke distance. In his artistic practice, Michael Krebber integrates painting as part of a complex system of media and art-historical references to expand a discourse on patterns of perception. Tim Gardner takes photography back into a tradition of aquarelle painting, so that media-shaped urban everyday life becomes the event of the place. The social spaces that Lisa Milroy describes in large-surface panel pictures stage "real" moments of an individuality, such as communication, leisure, shopping.

The works by Hildegard Joos, one of the most important representatives of Op-Art, function like a counter point and a multiple reference point at once in relation to the other works. Within the exhibition, there is a particular interplay between Joos' works and Esther Stocker's artistic position. Yet whereas Joos probes the laws of geometry and the symmetry of dots, in Esther Stocker's works there is a "shift from objects of perception to perception itself" (Martin Prinzhorn). For Here is There 2, Stocker will develop a wall picture in the foyer of the Secession. Marko Lulic refers in his work to attempts at the beginning of Modernism to conjoin painting, architecture and poster painting: his work for the facade of the Secession is a painted poster using advanced techniques, which unites the formats of panel painting and computer print.

Here is There is conceived for several international stations. The first exhibition took place from August 8 to September 30, 2001 at the Salzburger Kunstverein and showed works by Peter Doig, Anna Meyer and Lisa Milroy.