Held Together with Water 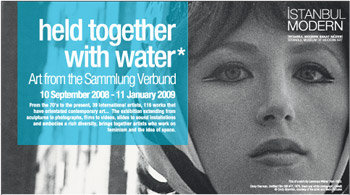 The Verbund Collection, brought to life by Verbund, Austria's leading electricity company, as a contemporary, internationally oriented and elite collection, will first be exhibited in the İstanbul Museum of Modern Art outside of Austria.

The exhibition titled "Held Together with Water", with its themes of "Performance" and "Spaces / Places", highlights the specific lines of contact in contemporary art, extending from the 1970's to our day. The exhibition articulates, with these two themes, how a lot of female and male artists abandoned painting and steered towards completely new forms of expression, and the transformation to photography, video and spatial installations.

Under the title "Performance", in a process starting with the 1970's, the orientation of the artists towards trends like the discovery of their own bodies, questioning their identity, and the feminist rebellion are dealt with.

As for the theme of "Spaces / Places", it focuses on the relationship art builds with spaces, visualising how spaces are deconstructed by artists, and then again integrated.

The exhibition is composed of the photographs of Sıtkı Kösemen together with those of Ergün Turan and Süreyya Yılmaz Dernek on September 10th at the Photography Gallery.

The city has long been a subject of investigation for the modern artist. After the Impressionists, art has been an eminently urban phenomenon. For over a century, cities have provided the most fertile ground for artists: as a table of social interchange, a source of inspiration, a marketplace and a haven. From the Futurists to Léger; from Duchamp’s Bachelor Machines to Ed Ruscha’s maps of Los Angeles; from the photographs by Weegee and Diane Arbus to those by Ara Güler, the urban context has been a territory for investigation, and the privileged vantage point from which to observe the sweeping changes that have affected us in the past 100 years.

The City Rises borrows its name from the seminal painting by Umberto Boccioni (1910) that glorifies the speed, the noise and the excitement of cities at the dawn of the 20th century.

The three artists presented in this exhibition offer the viewer a particular vision of urban life today, distant from the optimism of the Futurist vision, yet equally mesmerizing. Each one, by focusing on the repetition of apparently anodyne actions, lingering on an aesthetical analysis of labor, or confronting the viewer with a non-sentimental and politicized scrutiny of urban centres, presents us with a vision of the city and of the Zeitgeist that is as accurate as it is hyperbolic.