Memory is an intervention in the gallery that prevents any one complete viewing or experience of the work. Fabricated of 24 tons of rusting Cor-Ten steel, with industrial tiles and bolts exposed, the sculpture loosly resembles a balloon or egg-shaped object. The sculpture's steel surface engages the extremities of two of the gallery walls, including the ceiling, with the utmost precision. A temporary route through Deutsche Guggenheim connects 3 distinct access points to view the sculpture, including one interior view of a cavernous, seamless void. Curated by Sandhini Poddar and Alexandra Munroe. 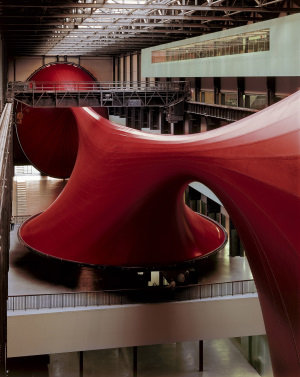 Using Cor-Ten steel for the first time, this work represents a new milestone in Kapoor’s career. Memory is positioned tightly within the compound of the Deutsche Guggenheim gallery space. Its thin Cor-Ten skin, only eight millimeters thick, suggests a form that is ephemeral and unmonumental. Memory appears to defy gravity as it gently glances up against the peripheries of the gallery walls and ceiling, and down again to the floor. Viewers are forced to negotiate the work at a remove. The Deutsche Guggenheim gallery is bifurcated into two distinct viewing areas, while a staircase leading down from the store offers a view into Memory’s dark, cavernous interior through a two-meter square aperture or window. Viewers are forced to contemplate Memory’s ensuing fragmentation by attempting to piece together the images retained in their memories. As such, they are required to exert more effort in the act of seeing. Kapoor describes this process as creating ‘mental sculpture’. As participants rather than as mere spectators of Memory, they become hyperconscious of their own positions in space.

Memory’s color properties relate this commission back to Kapoor’s early pigment pieces from the 1980s. Rather than necessitating a coat of paint to smoothen the interior curvature, the sculpture’s seamless steel tiles, perfectly manufactured to prevent any light from seeping through, read as one continuous form. These steel tiles create the necessary conditions for darkness and boundlessness within—the void. Furthermore, Kapoor’s sculptures elicit a certain confrontation. At a weight of twenty-four tons, Memory’s raw, industrial exterior, with its industrial bolts and hinges exposed, is absolutely foreboding.

“Memory is a site-specific installation about form and void which challenges and alters the architecture of the Deutsche Guggenheim gallery, and is among Kapoor’s largest and most memorable works,” remarks Richard Armstrong, Director, Solomon R. Guggenheim Foundation.

With the inauguration of the Deutsche Guggenheim in 1997, the Solomon R. Guggenheim Foundation and Deutsche Bank launched a unique and ambitious program of contemporary art commissions that has enabled the Guggenheim to act as a catalyst for artistic production. The participants in the series to date include both established and younger artists of various nationalities, working in a diversity of media, from paintings and photographs to large-scale sculptural and video installations. Anish Kapoor: Memory, is the fourteenth commission project to be completed since the program’s inception and is the Guggenheim Foundation’s first collaboration with the artist, known for his expansive vision and profound aesthetics.

The exhibition will travel to the Solomon R. Guggenheim Museum in New York at a date to be announced.

Anish Kapoor was born in 1954 in Mumbai, India. He has lived in London since the early 1970s and quickly rose to prominence in the 1980s. Best known for his explorations of “the void”, and for his use of color and scale, he has redefined contemporary sculpture since then. Kapoor has exhibited extensively both in London and internationally; his solo shows have included venues such as Kunsthalle Basel, Tate Gallery and the Hayward Gallery in London, Reina Sofia in Madrid, CAPC in Bordeaux and most recently at the Institute of Contemporary Art (ICA) in Boston.

Kapoor represented Britain at the XLIV Venice Biennale in 1990 when he was awarded the Premio Duemila prize. He is the recipient of the prestigious Turner Prize, awarded in 1991. Forthcoming exhibition venues include MAK Vienna and The Royal Academy, London in 2009. He has undertaken a number of major large-scale installations and commissions, including Taratantara (Baltic, Gateshead, 1999 and Piazza Plebicito, Naples), Marsyas (Tate Modern, London, 2002), Cloud Gate (Millennium Park, Chicago, 2004), Sky Mirror (Rockefeller Centre, New York, 2006) and Svayambh (Haus der Kunst, Munich, 2007), amongst others.

Anish Kapoor: Memory was conceived in 2006 by Alexandra Munroe, Senior Curator of Asian Art and is the second project of the Guggenheim’s Asian art initiative, following closely on the heels of the 2008 retrospective exhibition, Cai Guo-Qiang: I Want to Believe. It has been organized by Sandhini Poddar, Assistant Curator of Asian Art, who has also conceptualized the accompanying exhibition catalogue, which provides an in-depth analysis of Kapoor’s creative intellectual process, and offers glimpses into the development of Memory from the initial models until the final installation in Berlin. Multidisciplinary essays authored by Henri Lustiger-Thayer, Poddar, Gayatri Chakravorty Spivak, Steven Holl with David van der Leer, and Christopher Hornzee-Jones, describe Memory within a broad critical framework. The publication also features a comprehensive exhibition history and bibliography on Anish Kapoor. Anish Kapoor: Memory is available in German and English (25 Euro / 7 Euro for the press).

Guided tours are offered free of charge everyday at 6 p.m. The popular Lunch Lectures on Wednesdays at 1 p.m., as well as the established Brunch Lectures on Sundays at 11:30 a.m., which focus on specific topics of the exhibition, complete the range of possible art encounters.