Ottantadue Movimenti. The main focus of her interest is on contemporary architecture, in the exhibition she presents small-scale prints of the 82 photographic series she has created to date combining the pictures into an installation resembling a mosaic. The pictures often give an abstract impression, but they are nonetheless real and unmanipulated. 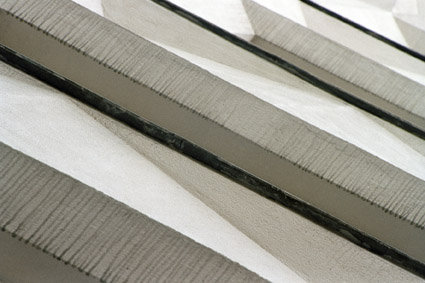 With her first solo exhibition in Berlin, Ottantadue Movimenti (English: 82 Movements), the Italian artist Lorenza Lucchi Basili (lives and works in Padua) allows us insight into her versatile photographic oeuvre, in which contemporary architecture plays a central role.
The exhibition offers a journey in time through Lucchi Basili’s artistic work. For Ottantadue Movimenti she produced small-scale prints of the 82 photographic series she has created to date. Although the images often seem abstract, they are real and un-manipulated. They show us fragments or sections of buildings from various angles, without any possibility of our identifying the architecture, its history or its location.

Lucchi Basili’s methods are driven by her search for the right perspective and framing. The artist herself has admitted that she only uses her camera to hold on to moments of reality. It was her encounters with projective geometry that led Lucchi Basili – who is a trained architect – to photography and to her interest in architectural structures and geometries that shape our urban life. “My photos originate from a conversation with a specific architecture,” explains Lucchi Basili. “What I am interested in is the lapse that sometimes occurs during the conversation; that is, the moment when the architecture reveals something of itself that was not intentionally planned. It is then that it says something essential about its true nature – its deep, unarticulated and often removed and denied symbolic meaning”.
The photos chosen for uqbar from the 82 series have been arranged in the space by the artist into a tight, mosaic-like installation. Lucchi Basili thus brings her building fragments into provisional relationships with one another, which reveal a potential spectrum of perspectives – especially since the display changes throughout the course of the exhibition. Visitors can purchase and take home the small-scale photographs at a symbolic price, which reconfigures the exhibition and the image correlations again and again.

Ottantadue Movimenti is the third and last of a series of exhibitions on spatial concepts and contemporary architecture taking place at uqbar project space in 2008 (February-March: Alexander Komarov; May-June 2008: Romana Schmalisch). The exhibition with Lorenza Lucchi Basili has been realized in cooperation with the Italian Cultural Institute in Berlin as part of the Third European Month of Photography Berlin 2008, supported by Regione Veneto, Oredaria Arti Contemporanee, Rome, and Fusina srl, Italy.