The Autobiographical in Contemporary Art. This exhibition illustrates the fact that although what is autobiographical in art can be a narcissistic reflection of self, it can also be of service in the search for the ego or in the dialogue with transience. On show video films, photographs, prints, drawings, installations, paintings and a slide show. Salient points are the various strategies for dealing with autobiographical material ranging from self-documentation to the cultivation of the individual image. Works by Louise Bourgeois, Martin Kippenberger, Mona Hatoum, Anri Sala and many more. 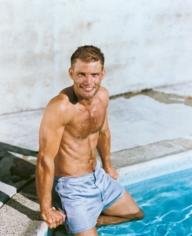 The exhibition "Ego Documents" is presenting contemporary art by artists who have made their own life the theme of their work. We will be showing autobiographical video films, photographs, prints, drawings, installations, paintings and a slide show. Salient points are the various strategies for dealing with autobiographical material ranging from self-documentation to the cultivation of the individual image. "Ego Documents" is Kathleen Bühler's first exhibition as curator of the contemporary art department.

For what reason do artists reveal private details of their lives? Is it only to satisfy the curiosity and craving for sensation of the viewer? Or might there be social or even political reasons for the divulging of intimate information. What happens when artists write diaries, take family snapshots and shoot holiday films? Is this art, or do the documents remain private memorabilia? Questions such as this are posed in the exhibition "Ego Documents".

Memories artistically processed
Approximately one hundred works from the last forty years are proof that the autobiographical in contemporary art takes on the most diverse forms. The variety of media ranges from video films, photographs, prints, drawings, installations, paintings and a slide show to a performance. The artists represented in the exhibition work with self-documentation techniques familiar in everyday life such as diaries, letters, photograph albums, holiday films or collections of memorabilia. Central to an autobiographical work of art is the artist's conscious dealing with memories and his or her intent to transform their own life experience into an artistic experience for the viewer.

From self-documentation to narcissistic self-display
"Ego Documents" is not about mere self-exposure. The artists are presenting the most varied concepts of ego, of identity and experience. They employ diverse strategies in dealing with autobiographical material. Some of the artists document their own lives, setting them in a narrative in order to make sense of the experiences. Sometimes they portray entire identity-finding processes in their works. Others undertake research into following traces of a "great" story, a civil war for instance, in their own "small" story. Thus, culture-specific moments appear in what to all intents
and purposes are private testimonials. The works of other artists are occupied with their own transience and what remains of life. The exhibition also shows that an autobiographical work can be a narcissistic self-portrayal as well as serving to cultivate the artist's own image.

The exhibition "Ego Documents" was conceived by Kathleen Bühler and is the opening event of her curatorship in the department for contemporary art.