When Earth Fucks With Space. His works in wood, bronze and plaster portray powerful and expressive figures. They assume unexpected forms and poses, referring both to historical and contemporary artistic strategies. The sculptures also show the texture of their material and their process of creation: carving, moulding and casting. 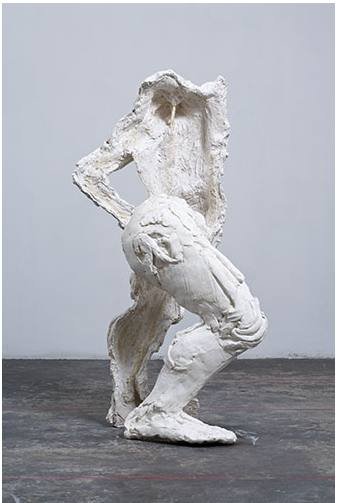 Thomas Houseago (Leeds, 1972) is a full-blooded sculptor. His works in wood, bronze and plaster portray powerful and expressive figures. They assume unexpected forms and poses, referring both to historical and contemporary artistic strategies. The sculptures also show the texture of their material and their process of creation: carving, moulding and casting. At the same time, they actively speak to the spectator. The fact that these sculptures play an active role can be seen in their execution. The lively figures by Thomas Houseago consume the space in monumental and expressive postures. The artist alludes to modernism, without placing purity of form central. Rather, it can be said that his work is about the deconstruction of sculpture. Thomas Houseago creates forms and postures that sharply comment on the art of sculpture. He deliberately plays with the parameters and functions of sculpture: volume, relief, representation and monumentality. By either reversing or exaggerating these elements, he creates a new form of expression that refers back to itself, to sculpture and its history.

This approach is by no means a purely formal game, but stems from a genuine, contemporary vision of sculpture. Although the artist creates figurative sculpture, his work has nothing to do with humanistic art. Indeed, the figures by Thomas Houseago have barely anything human about them. Rather, they say something about how works of art are presented in the world today. Their inhuman nature is clearly visible: limbs are missing or are rendered completely flat. Figures are constructed as objects, faces replaced by masks. His sculptures present humanity as a strange fact. Or rather, they refer to this, via the sculptural ideas and mental leaps of the artist. Thomas Houseago makes particularly inventive use of volume, material and form. He focuses on the uniqueness of the medium of sculpture and continues critically with each representation. In this way he positions his sculptures firmly in the present, without surrendering any of their individuality. On the contrary, the sculptures gain intensity, because they make a wide spectrum of meanings possible, from an art history reading to misgivings for contemporary media communications. Thomas Houseago studied at St. Martin’s School of Art in London and the Ateliers in Amsterdam. After completing his studies, he lived and worked for several years in Brussels before moving to Los Angeles. During the past year, the work of Thomas Houseago has been shown in Glasgow, Los Angeles, London, Paris, Milan, Berlin, Arnhem (Sonsbeek 2008) and Brussels.