The exhibition presents the world premiere of Mekas' latest 4-monitor video installation entitled Lithuania and the Collapse of the USSR (2008), a collision between forces of time, memory, change, and human. Also on view for the first time will be new works from the artist's dynamic collection of 40 film stills series, illustrating his willingness to reevaluate past methods to test the boundaries of artistic practice. 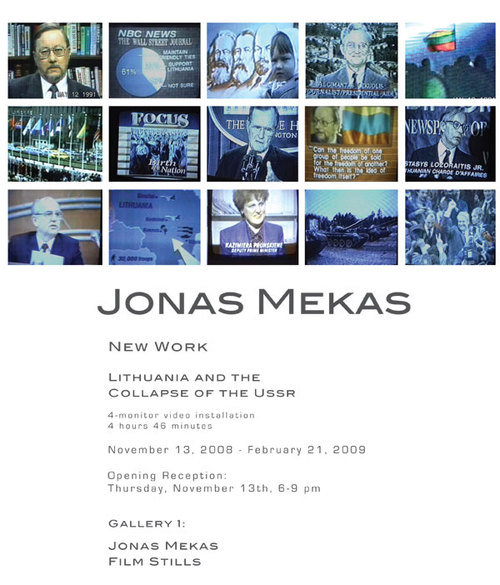 Maya Stendhal Gallery is delighted to announce Jonas Mekas: New Work, which will be on view from November 13, 2008 through February 21, 2009. The exhibition will present the world premiere of Jonas Mekas’ latest 4-monitor video installation entitled Lithuania and the Collapse of the USSR (2008). Also on view for the first time will be new works from the artist’s dynamic collection of 40 film stills series.

Forces of time, memory, change, and human will collide in Mekas’ compelling work Lithuania and the Collapse of the USSR (2008). The work’s title refers to the historical time when the world watched as Mekas’ home country of Lithuania fought for independence from the stronghold of Soviet rule. Comprised of 4 parts with a total running time of 4 hours and 46 minutes, it will be presented in a 4-monitor video installation format offering a chronological overview of Lithuania’s birth as an independent nation. With a video camera, Mekas recorded newscasts that played daily in 1991 on his television set at home. Footage includes reports of the Soviet Union’s use of “aggressive actions” that called for Lithuanian back down, freedom demonstrations, interviews and statements made by top politicians, journalists, and analysts that include Lithuanian President Vytautas Landsbergis, Deputy Prime Minister Kazimiera Prunskiene, Soviet Leader Mikhail Gorbachev, Russian President Boris Yeltsin, United States President George H.W. Bush among others, as well as moving portraits of the Lithuanian people who were directly affected by the conflict. Mekas’ account, reported by news outlets in the United States, also reveals the shaping and shifting of political, economic, and social relations between the Eastern Europe and the West at the time.

“The video is made up of footage that I took with my Sony from the television newscasts during the collapse of the USSR, with the home noises in the background. It’s a capsule of record of what happened and how it happened during that crucial period as recorded by the television newscasters. It can be viewed as a classic Greek drama in which the destinies of nations are changed drastically by the unbending, bordering on irrational will of one single man (Vytautas Landsbergis), one small nation determined to regain its freedom, backed by its fight against the Might & Power, against the Impossible.”
Jonas Mekas

The 1960s witnessed the breakdown of art’s time worn paradigms as artists exchanged ideas through activities that permeated medium specific boundaries, the white box galleries and museums, and hierarchies that delineated high and low. Mekas, a programmer, archivist, fundraiser, theoretician, and all around proselytizer for the moving image, encapsulated this revolutionary spirit in his films from the era, which include portraits of Fluxus and its founder George Maciunas along with members Nam June Paik, Yoko Ono, Shigeko Kubota, and Jackson Mac Low. The currents felt during this decade resonate in Collection of 40 Film Stills from Zefiro Torna or Scenes of the Life of George Maciunas (2007), which chronicles the life of Fluxus impresario George Maciunas and his friends. Similarly, Collection of 40 Film Stills: Velvet Underground (2008) draws from the only recorded footage of the Velvet Underground’s first public appearance at the Psychiatrists Convention from January 14, 1966. A psychedelic montage of music, color, and dance, this group includes appearances by 1960’s pop culture icons Lou Reed, Nico, Eddie Sedgwick, and Andy Warhol. Collection of 40 Film Stills from Birth of a Nation (2008) imparts a telling portrait of the enigmatic characters and diverse impulses comprising the underground film community. Included are images of Stan Brakhage, Peter Kubelka, Harry Smith, Shirley Clark, Peter Bogdanovich, Ken Jacobs, Jack Smith, Kenneth Anger, and others.

“There are no rules written on the sky…I can show my films on the screen, I can cut them into pieces and show them as objects or multi-media installations.” Two new works also on view illustrate Mekas’ unique sensibility to the beauty, poeticism, and meaning of his subject matter, whether he is observing epic events and pop culture icons, or life’s everyday occurrences. Collection of 40 Film Stills from Mozart & Wein (2008) gives a riveting account of Elvis Presley’s last concert in New York on June 9, 1972. A tableaux of flickering lights, movement, and mesmeric color, images portray a white jumpsuit clad Elvis at the peak of his now legendary performance. Whether addressing film, art, or life, the manifesto has always been a crucial aspect of Mekas’ practice. Collection of 40 Film Stills: Summer Haiku: A Manifesto (2008) began as a project for Serpentine Gallery’s Manifesto Marathon 2008, a futurological congress in which leading artists, architects, writers, philosophers, politicians presented manifestos for the 21st century. For his presentation, Mekas unveiled images captured from his vast archival footage, which convey his philosophical views on nature, illuminating nature’s beauty and fragility.

The hallmark feature of Mekas’ captivating film still collections underscore his ability to transcend mediums, and at the same time, illustrate his willingness to reevaluate past methods to test the boundaries of artistic practice. They compliment the ephemeral nature of his films, bringing subjects and events to a stand still and memorializing them forever. This dissection of the medium is truly avant-garde - it refuses to obey the conventions of the medium and reveals and examines the very nature of the medium itself. All Collections of 40 Film Stills are produced in edition of 3 with 1 artist proof, and printed in cibachrome measuring 20” x 16” (50.8 x 40.64) each. The film stills are signed individually in verso by Jonas Mekas, and a certificate of authenticity also signed by the artist and Maya Stendhal Gallery accompanies each collection.

The exhibition at Maya Stendhal Gallery coincides with a major career retrospective on Jonas Mekas, which will be held at Museum Ludwig, Cologne, Germany from November 8, 2008 to March 1, 2009. Through personal archives in the form of documents, photographs, catalogues, texts, and film posters, the presentation will survey important periods of the artist’s life and career including New American Cinema, Film-maker’s Cinematheque, Film Culture, and Anthology Film Archives. Also on view will be Mekas’ classic films in combination with his most recent work, notably 365 Project and Collection of 40 Film Stills: Summer Haiku: A Manifesto. Jonas Mekas will have a second major exhibition at Serpentine Gallery, London in 2010.