The artworks in the exhibition deal with the act of speaking, reading and writing. They particularly reflect on and emphasise the performative qualities of language and thus reveal the strong and inseparable connection between words' meaning and their performance/performer. The group exhibition explores the subversive power of spoken or written text but also unmasks the inflationary and culturally connoted use of words and phrases. Works by: Tim Etchells (UK) and Vlatka Horvat (CRO), Mukul Patel (UK) and Manu Luksch, Christoph Keller, Jaromil and Jodi, Linda Hilfling, KH Jeron, Tudor Bratu, Michael Hoepfel, Trikoton, Evan Roth. 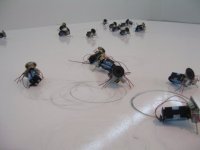 
Speaking Out Loud centers on the processes of both “thinking out loud” and “speaking out.” Thinking out loud describes the associative, dynamic and rather uncontrolled process of simultaneously thinking and speaking about a particular topic. We think out loud to make a suggestion, to put forward an idea or a thought rather than to make a claim. Speaking Out Loud advocates this free and creative process of thinking out loud through artworks that enable a playful and surprising experience of language. This happens in the form of what could be summarised as experimental language exercises or canny transformations and alternations of language.

Meanwhile the act of speaking out demonstrates resistance and the existence of alternative concepts and views. As a democratic act it constitutes a cornerstone of democratic society. In that sense, the exhibition promotes the idea of controversy, dissent and debate as a relevant society shaping strategy. In the light of representative democracies, low voter participation and increasingly levelled concepts of life, Speaking Out Loud attempts to call for taking an active role in the debate. Moreover it explores the subversive power of spoken or written text but also unmasks the inflationary and culturally connoted use of words and phrases.

The artworks in the exhibition deal with the act of speaking, reading and writing. They particularly reflect on and emphasise the performative qualities of language and thus reveal the strong and inseparable connection between words' meaning and their performance/performer.
Renowned novelist Paul Auster captured the act of speaking as “When words come out, fly into the air, live for a moment, and die. Strange, is it not?” It is this fluidity and dynamics of language and its meaning that the exhibition centers on, observes and reflects.

In this fluid state, words fly and dance, thus enabling a mental dialogue between the artwork and its viewer/listener, and opening up to continuous interpretation. The exhibition mainly presents works of Dutch and English language. Thereby it also reflects on a world in which vast distances are bridged with relative facility but where language remains a system of cultural “multivalence.”

List of works:
Insults and Praises by Tim Etchells (UK) and Vlatka Horvat (CRO)
A New and Exciting Experience by Mukul Patel (UK) and Manu Luksch (AT)
Good and Evil by Charles Sandison (UK)
Interpreters by Christoph Keller (DE)
Time Based Text by Jaromil (IT) and Jodi (NL)
Gate peepin' and Misspelling Generator by Linda Hilfling (DEN)
Horde by KH Jeron (DE), in collaboration with Dr. Dominik Kuropka
A Conversation Piece by Tudor Bratu (RO)
Text and Semiotic Collider by Michael Hoepfel (DE)
The Voice Knitting Collection by Trikoton (DE)
Explicit Content Only by Evan Roth (US)

During the opening of the group exhibition Speaking Out Loud there will be three performances by Omer Krieger (IL), Bas Böttcher (DE) and the Dutch hiphop artist Blaxtar. The exhibition is on show until january 24, 2009.

OMER KRIEGER, LIVE COVERAGE
Omer Krieger works in performance, video, audio, communication systems, social environments and public spaces. Live Coverage is a public system covering speech and publishing text in a physical social space. The system is activated by people in a process of live reporting, based on an infrastructure of microphones, a listening station and a text display. The keywords heard in the sites of coverage are published by the human reporter on a screen, in constant and questionably immediate updates. Live Coverage is proposed as a permanent media installation for public spaces, a form of journalism. At the opening of Speaking Out Loud, Omer Krieger will cover conversations of the visitors. Programming by Gil Rimon.

BAS BÖTTCHER
During the early 1990s Bas Böttcher was the first German-speaking rapper to perform his lyrics as a new form of poetry and put them on stage in the context of literary events. He developed a new form of poetry which is dynamic and rhythmic, as well as very direct and driven by the sound and melody of the language. His particular style of performance gives his texts a poetic maelstrom. His lyrics/texts are sharp observations about contemporary life, often referring to subjects such as pop culture and media. The rap poetry of Bas Böttcher and his band Zentrifugal is closely connected to American Slam Poetry. The genre uses distinct pictures ‘drawn’ with words. The first poetry slams took place in the late 1980s in American bars, cafés and clubs. One of them was the Nuyorican Poets Cafe in New York, where young American
poets organised literary competitions they called ‘Slams’. At the beginning of the 1990s the first slam competitions were organised in Germany, which soon developed a slam scene of its own. Poetry slams are far removed from literary readings. They represent a literary experiment with a high entertainment factor for the listeners, as they also function as the jury. When Böttcher performs outside German speaking-countries, he often uses projections which display the translation of his texts accompanied by stylish video loops.
Böttcher will perform a selection of his texts at the opening of 'Speaking Out Loud'.
http://www.basboettcher.de/

BLAXTAR
The Dutch hip-hop artist Blaxtar is very conscious of the power of language, the strength of the word. It is simply logical then that the texts are printed in a book let with his album. Even more: the titles of all the numbers together, one after another, make a poem. Blaxtar does more than just show us that he comes off the streets. In his texts he showcases his interest in philosophy,
science and religion. Recently he organized the event Spoken. For this occasion Blaxtar phoned up some friends to ask if they were interested in an evening that only revolved around the content of their texts. The evening session gave a large group of different professional hip-hop artists the opportunity to gain exposure.
http://www.blaxtar.com

Netherlands Media Art Institute
Keizersgracht 264 - Amsterdam
Opening hours Tuesday - Saturday and firts Sunday of the month + December 7 and January 4 from 1: 00 - 6:00 pm, The NImk is closed for public from December 21 until January 1th.
Entrance 4,50 (2,50 with discount). With Museumjaarkart free entrance