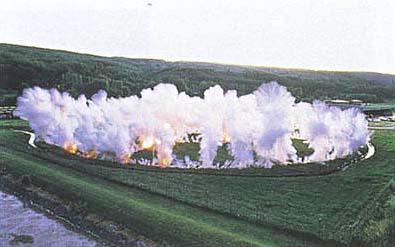 The dominance of present art theory tends to make us forget old functions that are sometimes still very much alive in non-western cultures and that may be revived in western contemporary art.

Beauty was in the past often connected with religious activity. People honour and worship gods with the most beautiful things they have. But also healing rituals involve an aesthetic dimension. The Greek philosophical idea of the connection between goodness and beauty seems irrelevant for post-modern art, especially because the meaning is more important than the formal expression or better the formal expression has to be determined by the idea and the meaning.

Nevertheless the question of this connection of beauty with the good health, the wealth of the body, is coming back to us through artists from other cultures. Illness and suffering are present in the works of Beuys and Tapies for instance to a point where it is not clear whether the fetishist aspect is just external or has played a curative role. The anthropological point of view seems to become ever growing in art. It allows a certain communication between works of different cultures, even if it is a sort of delayed communication, corresponding to the specificity of art.

Gera and Gedewon in Ethiopia are scholars using traditional medicine. They make talismanic paintings that are used to cure the patients who consult them. The paintings or drawings are made according to different rules inherited from the traditional knowledge and connected with the Old Testament. Each uses them with a personal input and style. According to the diseases or disorders described by the patient, they make a drawing that is supposed to help him get things together again.

Joe Ben, a Navajo Indian in New Mexico, is practicing the traditional sandpainting that he inherited from medicine men. The person to be healed is placed in the middle of the painting made out of coloured mineral powders. He then attends a ceremony with long chants and the sandpainting is destroyed at the end of the ritual. Joe Ben is using this technique either with the traditional style and motives or in a very free personal way.

Cai Guo-Qiang, a Chinese artist living in New York, has done a set of works reflecting traditional Chinese medicine. Two bodies hanging horizontally are covered with burning sticks that heal the part of the body that they cover.