To Momenta Art's Video Library. A screenings of recent works by Neil Beloufa, Brendan Fernandes, Antoni Muntadas, and Diane Nerwen. The four artists featured in this screening were presented in a show curated by Momenta Art for the Hordaland Art Centre, Bergen, Norway in October 2008. 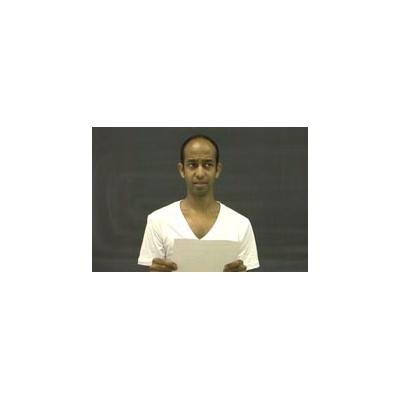 
Momenta Art is pleased to present screenings of recent works added to its video library, including work by Neil Beloufa, Brendan Fernandes, Antoni Muntadas, and Diane Nerwen. The gallery’s video library allows viewers to choose and view work by over 60 video artists who have shown with Momenta since 1991. The four artists featured in this screening were presented in a show curated by Momenta Art for the Hordaland Art Centre, Bergen, Norway in October 2008.

Neil Beloufa, Kempinski, 2007, 13:44 min. The scenario of Kempinski, filmed in various towns in Mali, is defined by specific rules: interviewed people imagine the future and speak about it in the present tense. Their hopeful, poetic and spiritual stories and fantasies are recorded and edited in a melodic way; Kempinski thus cleverly challenges our exotic expectations and stereotypes about Africa. Neil Beloufa is an Algerian artist living in Paris. His work has been screened internationally in London, Moscow, Berlin, Brooklyn, Geneva, Mali, and elsewhere including the Jeu de Paume, Palais de Tokyo, and Centre Pompidou in Paris.

Brendan Fernandes, Foe, 2008, 6 min. Foe presents video footage of the artist receiving lessons from an acting coach to learn the “accents” of his own disparate cultural backgrounds: Goan Indian, Kenyan, and Canadian. The artist struggles, twists his speech, is softly corrected by the coach as he recites a passage from Robinson Crusoe by J. M. Coetzee. In this book, Friday (the savage) has been mutilated; his tongue has been removed and he cannot speak. Fernandes completed the Independent Study Program of the Whitney Museum of American Art and has received grants from The Ontario and Canada Councils for the Arts. He has exhibited widely, including The Third Guangzhou Triennial, Guangzhou, China and at The Albright-Knox Art Gallery in Buffalo, NY.

Muntadas, On Translation: Fear/Miedo, 2005, 25 min. This piece weaves together interviews with people who experience the tensions of border zones on a daily basis and refers to the idea of fear on the border between Mexico and the United States. In the video, fear reveals itself as a translation of politics and economics. The piece was created to be broadcast in four locations that connect the centers of power/decision-making with the places where these policies are evident everyday: Tijuana, San Diego, Mexico City, and Washington, DC. Antoni Muntadas has received several prizes and grants including those of the Guggenheim Foundation, the Rockefeller foundation, the National Endowment for the Arts.

Diane Nerwen- Open House/ Chapter 1: Removal, 2008, 10 min. This piece documents the development that occurred as a result of Williamsburg, Brooklyn’s re-zoning and the recent loosening of building codes. Nerwen presents a neighborhood being torn apart by both developers and property owners desperate to cash in before the market crashed. The piece chronicles the resultant violence and displacement in a condensed and effective manner. Diane Nerwen is a video artist and media arts educator. She has shown her work internationally, including screenings at the Berlin Film Festival, the New York Video Festival, the Guggenheim Museum, NY and the Tate Modern, London. Her work has been supported by grants from the New York State Council on the Arts, New York Foundation for the Arts and Creative Capital Foundation.