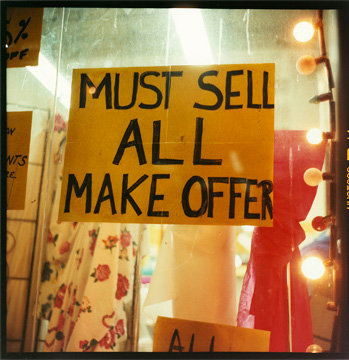 The MNCARS presents the first international retrospective of the work of photographer Zoe Leonard. Consisting of approximately one hundred works, the exhibition features a selection of images taken by the New York artist since the 1970s. Curated by Lynne Cooke, the MNCARS Deputy Director for Conservation, Research and Publicity, and organised by the Fotomuseum Winterthur (Switzerland), the exhibition reveals Leonard’s interest in everyday contrasts: nature vs. the urban, and the manufactured vs. the original. The focal point of Leonard’s artistic career and of the present exhibit is photography as a definition of modern society.

Zoe Leonard refuses to view the photograph as a neutral document, opting instead to define it as a “subjective truth.” Her work is based on observation and memory, through portraying maps and anatomical models, showcases, museums and shops of her familiar environs. The artist is unencumbered by the protocols and conventions of photography, resorting even to printing processes that are all but obsolete. She works with the images over a long period of time, copying them in different sizes and on different papers, and she never edits them but rather accepts the imperfections that may emerge in the development process, such as dust or scratches.

One of the most outstanding pieces in this retrospective of her oeuvre is Analogue 1998-2007. Comprising an extensive selection of photographs, this project is organised conceptually rather than chronologically. The sets of images show the effects of globalisation through photographs of shops in New York and other major cities.

The installations of Argentinean visual artist Leandro Erlich question the perception of reality through simulations and optical effects. The artist manipulates everyday situations and spaces in order to establish a parallel reality that is linked to the sole, objective truth.

In his first individual exhibition in Spain, Erlich presents one of his most ambitious projects – La Torre (The Tower). Installed in the Nouvel Courtyard and produced especially for the MNCARS, La Torre is a tall building decorated like a block of flats, complete with windows and corridors, and consists of a mirror device that creates a play on perspectives, in which the observer sees himself and is seen depending on his location. Visitors on the lower level can see what is happening on the upper level, and vice versa. In addition, the people inside the installation appear to float when seen by those who are looking through the windows from the outside. The public’s participation in La Torre is essential to completing the allegorical significance proposed by Erlich.