The exhibition will include two video installations, viewable in the gallery, and a film: "Ovidie", which will be screened in a cinema. 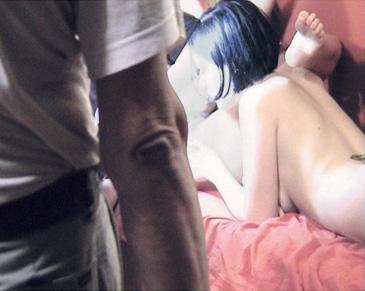 The exhibition will include two video installations, viewable in the gallery, and a film: "Ovidie", which will be screened in a cinema (please contact the gallery for details).

- Ovidie (video, 116 min, 2000)
Ovidie is a young X-film actress whom Clarisse Hahn filmed over more than a year. For several months, the artist shared her apartment with Ovidie and her husband, which enabled her to capture moments in their daily life: tiffs, discussions, interviews... Pornography doesn't come across as something media-staged, it is rather conceived as a reality through which it is possible to see the complexity of the relationships that are woven between people. Ovidie and James are not all that different from other couples, they simply find it extremely easy to talk about their experience of love and sexuality. The feelings and desires they give voice to lead to other more general questions, conjuring up the complicated nature of the relations between a couple, their sex life, and their work.

- hÃ´pital/hospital (video, 56 min, 1999)
In the video: "hospital", we see caring staff members working on bodies in situations of suffering and deterioration. Management of these extreme states becomes the element around which everyday life is structured. The fact of focusing on technical gestures makes it possible to keep the bodies at a certain remove. In order to describe the various forms of pain, a special vocabulary is used, which irons out the emotional aspect of certain situations. This type of language is used less to express a feeling than to rein in its violence, scaling the pell-mell emotions down to a small number of formulae.

- hospital/ovidie (video installation, 2002)
By comparing precise sequences from the two films, the hospital/ovidie installation ushers in a crosswise reading of the artist's work. The two worlds that are depicted (the porn world, where young bodies flaunt their nakedness without any embarrassment, and the world of a hospital geriatic department) don't seem to clash, but rather offer glimpses of their similarities. In both instances, the relationship to the body wavers between closeness and distance. To what extent are we conscious of our body when it is touched or penetrated? At what point do we intrude upon the privacy of the other at the moment of contact? There is a precarious balance between an extreme physical linkage and an emotional distance which is inherent to any professional activity.

The body appears turn by turn like a well adjusted mechanism and like a machine running out of steam. At the hospital, motionless patients are moved, transported, washed and surrounded by a whole host of caring gestures. Their slowed-down movements contrast with those of the nurses moving briskly around the ward. During the porn film shoots the artist was in on, she didn't film climactic moments, but focused rather on those moments when everyone is aware of being in a process representing the sexual act. She recorded different stages in the making of the pornographic image. We see a director handling the bodies of young actors and constructing an improbabe edifice of flesh. The actors come across as concentrated and attentive, when they are not joking with one another, with a detached look about them.

- boyzone (modulable video installation, 1998/2002)
The series of "boyzone" videos focuses on the signs that are exchanged by bodily postures. When Clarisse Hahn films groups of men (beer-drinking squatters naked from the waist up, teenagers doing martial arts training in a public park, scouts, bodybuilders...), she observes the attitudes that refer to a collective world. She tries to show to what extent we are vulnerable, or not, to stereotypes; and to what extent we base our attitudes on the attitudes of the group we belong to. The artist also observes solitary forms of body language, where the body appears restricted or altered by outward intervention, giving rise to repetitive and coded gestures.